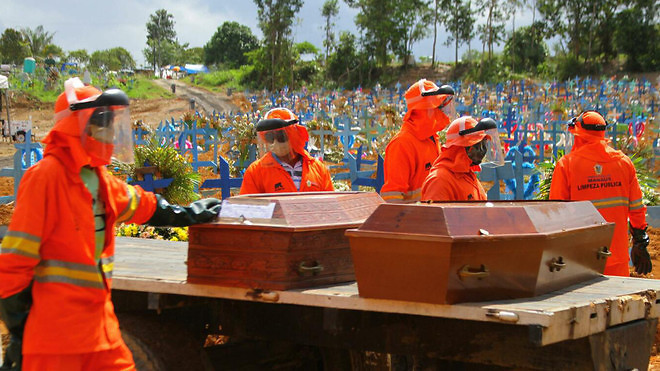 When will the pandemic end? When will our lives return to normal? This question is plaguing billions of people worldwide. But while a relatively normal life is possible again in Germany, a state of emergency remains in place for many developing countries in South America- and it could go on for years. A look at Latin-American hotspots in the crisis. In Germany, life is easier again. Six months after the lockdown, which was not as strict here as in other countries, most Germans have returned to a relatively normal, everyday life.

Many people in this country are able to do Home Office in a spacious house, with a garden. Children have returned to school, and leisure activities are possible again. Slowly, people are drawn back to restaurants and cinemas - of course while adhering to the requirements of safety distances and the wearing of masks. Wearing a mask is probably the least severe problem among people in the global south. In many countries in South America, the coronavirus has struck with intense severity.

South America has become the epicenter of the pandemic. Latin America and the Caribbean are the most affected regions in the world, with more than six million detected infections, with a high level of obscurity. Brazil leads the ranks in the region with more than 3.3 million infections and more than 107,000 deaths. Globally, there are higher cases reported only in the United States. Despite these figures, many people simply must work to survive. There are no social security systems in the favelas of Rio de Janeiro. If you don't work, you don't eat. Although mass graves are being excavated throughout the country, President Bolsonaro continues to dispute the problem.

Only under exceptional circumstances does he wear a mask. Bolsonaro, a right-wing populist, the leading political personality in the country with the largest influence, especially on the poor and less educated members of the population, doubts the existence of the virus. The president continues to spread disillusioned conspiracy theories. "A lot of people listen to what he says, but that puts lives at risk. Every day", quotes the Colombian science-journalist Tania Valbuena. The situation is catastrophic all across the country. The most vulnerable citizens are favelas residents, indigenous communities and homeless people. The corona virus has also severely affected neglected regions such as the state of Amazonas, where the mortality rate is the highest. In Manaus, the capital of the state of Amazonas, there is a lack of intensive care beds for the large number of Covid-19 patients. The emergency coordinator of "Doctors without Borders" in the region, Bart Janssen, says that the situation is extreme. "When I visited to assess the situation, the hospital management told me that almost 100 percent of their Covid-19 patients who needed intensive care had died."

Lack of sufficient medical staff is decreasing because nurses in the hospitals are dying more quickly of Covid-19 than in any other country in the world. While in Germany there are debates about whether masks and concert cancellations are necessary, and demonstrators in Berlin claim that the disease is a lie, countries like Brazil are in the midst of a state of emergency. While many experts in Germany suspect that the Corona-haunt will end next year, developing countries are forced to be patient. Science journalist, Tania Valbuena, is sure it will take years for a potential vaccine to reach the countries of South America.

"The first world countries have advantages over social determinants of health and more investment in science and supports in their health systems that make it a little easier to manage", she says. "A vaccine is distributed there first - the poorer countries will have to wait a long time for it to be universally available." Patience is also needed in her native Colombia. Freedom of movement is very restricted. The general curfew, with a number of exemptions for certain professions and activities, will once again have to be observed on 31 th August 2020. In Bogota, and other major cities, freedom of movement is strongly restricted. Leaving the city is only possible with special permission. "For almost five months, my life has been confined to a three-storey apartment building, along with 20 other people", says the journalist Samina Stämpfli in a personal text. She reports for "media from Switzerland", based in Colombia. In Santa Marta, the village in Colombia where Stämpfli has been stranded since the beginning of the pandemic, residents are only allowed to leave their houses to purchase food. Citizens are allocated one day of the week for purchases. The specific day, is based on the last digit of the identity card. The numbers are checked at the entrances of the shopping centres. "Local markets in the poorer neighbourhoods do not take this very seriously, but there are only a limited number of products", Stämpfli continues. Just in the past month, the corona cases have risen rapidly. Colombia is now at 400,000 infected, and averages around 10,000 new infections per day.

The numbers are based on about 30,000 tests a day - one can only guess how high the numbers actually are. The President of Colombia states, "It is a fact, that we must now learn to live with the virus". The first wave seems to be endless here, the number of infections does not fall, but the lockdown cannot continue forever. "How can life continue in a country with an Organisation for Economic Co-operation and Development (OECD) average of 1.7 hospital beds per 1,000 inhabitants?", Stämpfli asks. Global inequality has been a subject of international politics for countless decades. Chancellor Merkel called Corona the "biggest challenge since the end of World War II." This applies not only to the German people, but to the world as a whole. Billions of people are envious of Germany and the conditions under which we can live with Corona. If more people were aware of this fact, it could perhaps, make the challenge seem a little bit easier.