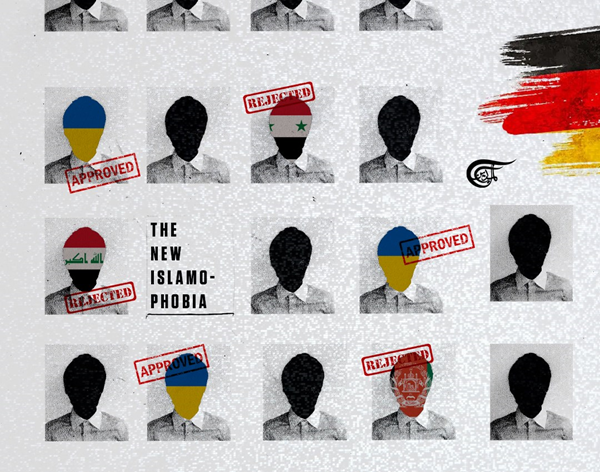 Germany's prioritization of Ukrainians fleeing war is occurring on the backs of Muslim refugees.

Islamophobia has many faces: some are visibly ugly and unmistakable in their hateful intent, such as white supremacists burning copies of the Quran with full police protection in Scandinavia or mobs of bloodthirsty Hindu extremists engaging in anti-Muslim pogroms in India.

Then there is the anti-Palestinian Islamophobia of good old reliable "Israel" during the Muslim Holy Month of Ramadan when its heavily armed occupation forces repeatedly storm the Al-Aqsa Mosque compound and brutalize peaceful worshippers with sadistic abandon, while mobs of Jewish extremists congregate on the streets and chant "Death to Arabs!"

Other manifestations of anti-Muslim bigotry are less physically violent: legislative ones, such as criminalizing the hijab in France, and those that are more structural and systemic, such as the discriminatory practices of racial profiling, employment, and housing discrimination, as well as discursive Islamophobia in the form of biased and negative media representation.

In these times, as war has once again returned to the uncivilized disaster continent, that is Europe, plagued by a bungled pandemic that had already killed 1.4 million people (the entire population of a city like San Diego, CA or San Antonio, TX) by the end of last year and where the diseases of racism, white supremacy, and Islamophobia reign equally supreme, Germany has succeeded in finding new, creative ways of demeaning Muslims which, I must admit, warrant complimenting as they are a testament to that innovative drive Germans are famous for in the fields of engineering and technology, and which in 2022 seem to have extended to white supremacy as well.

I am talking about the concerted effort of rolling out the red carpet for Ukrainian refugees, and by doing so, demoting non-Ukrainian ones, especially from Muslim-majority countries rendered conflict zones by Western imperialism, to second-class undesirables...