Using Anti-Terrorism As An Excuse, Austria Is Escalating Its Domestic War On Islam - TMV 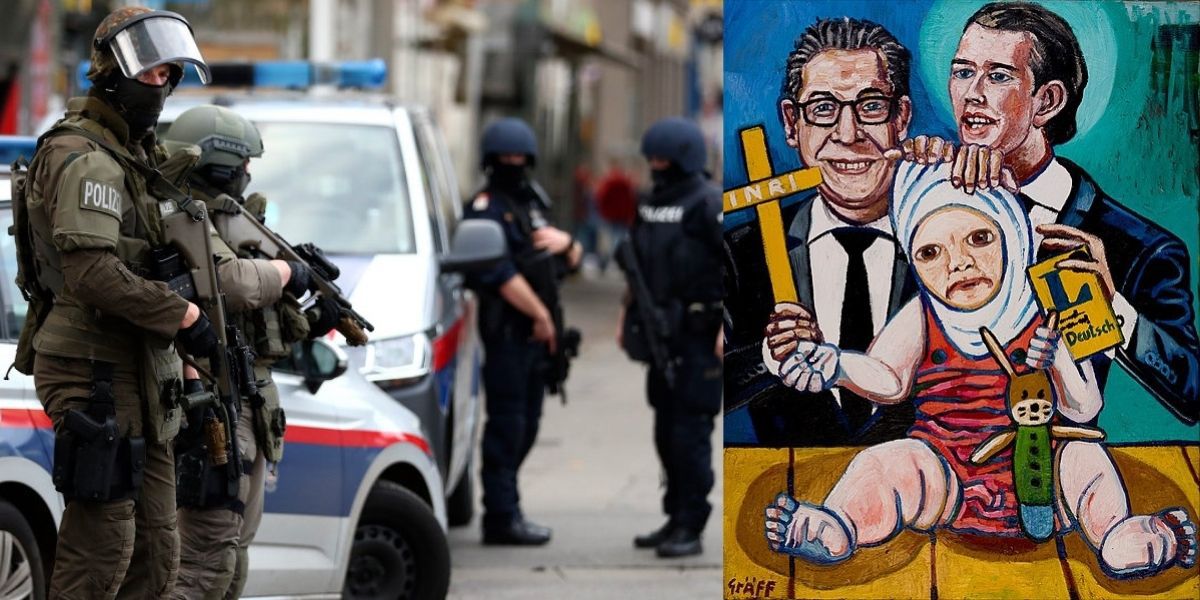 Image courtesy of The Muslim Vibe

The caricature above by Mathias Laurenz Gräf is titled "Liebende Eltern" (loving parents) and depicts Austria's chancellor Sebastian Kurz and disgraced former vice-chancellor Heinz-Christian Strache of the right-wing FPÖ party trying to take the hijab off a Muslim girl.

In the wake of the November 2nd terrorist attack in Vienna, Austria's undeclared War on Islam is entering its next decisive phase: the government has expedited tough new legislation that will further diminish the already limited civil liberties of the country's half a million Muslims.

The day after the attack, which was perpetrated by a 20-year-old Austrian of North Macedonian parentage that left 5 people dead, including the attacker Kujtim F. himself, and two dozen injured, Chancellor Sebastian Kurz of the conservative Austrian People's Party (ÖVP) held a speech that is exemplary for the West's supremacist, fallacious, and racist approach to anti-terrorism.

While freely engaging in worn-out clash-of-civilizations rhetoric by saying things like "this was an attack on our model of living, on our core values, on our democracy" and "this is a fight between civilization and barbarism" (despite the investigation into the attack and its motives still ongoing), Kurz also didn't hesitate to juxtapose Islam and terrorism in that gloriously liberal racist manner that veils insults as compliments.

Despite assuring the Muslim community that Austria's enemies were "never all the members of an entire religion" and "never all the people that originate from a certain country" and that this was "not an altercation between Christians and Muslims or between Austrians and migrants," Kurz quickly showed the true nature of his government as evidenced by the wanton closures of mosques and police raids that followed.

Furthermore, in an attempt to legitimize this brand of ad-hoc Islamophobia and make it more democratically palatable, the Austrian government on November 18th passed a package of controversial "anti-terror" measures that includes everything from preventive electronic surveillance of released prisoners deemed a threat to national security and stripping away the Austrian citizenship of convicted terrorists to easing the closures of Muslim organizations and outlawing "political Islam."

Like the country he governs, Kurz has a history of duplicity and contradictory actions with regards to Islam: As head of the foreign ministry from 2013-17, which in Austria is also tasked with negotiating and drafting treaties between the Austrian state and domestic actors like religious groups, he was the driving force behind the country's 2015 "Islamgesetz", a law regulating the legal status of the world's fastest-growing religion in Austria.

Kurz on the other hand, summed up the 2015 law by saying that "there should be no contradiction between being a devout Muslim and a proud Austrian" - an August proclamation that did not stop him from otherizing and fear-mongering against immigrants throughout his campaign for the 2017 general elections which he won, making him the youngest democratically elected head of government in the world.

One who - lacking an outright majority to govern - had no qualms about entering into a coalition with the right-wing Austrian Freedom Party (FPÖ), appointing its party leader Heinz Christian Strache as Vice-Chancellor.

In the best Banana Republican tradition, that first Kurz-led government lasted a whole five months when in the course of the "Ibizagate" corruption scandal surrounding Strache it was forced to resign and make way for fresh elections which Kurz and his ÖVP won again.

One of the last official "successes" of the Kurz I cabinet was the passing of a hijab ban for children in elementary schools by Austria's parliament in May of 2019. The law not only forbids "the wearing of ideological and religious clothing that entails a covering of the head", but does not even try to hide the fact that it exclusively targets Islam: the Jewish kippa and the Sikh patka are exempt from this discriminatory and blatantly Islamophobic ban.

Only four years after proclaiming that devout Muslims can be proud Austrians, female Muslim-Austrian schoolchildren are now forced to choose between their religion and their homeland...