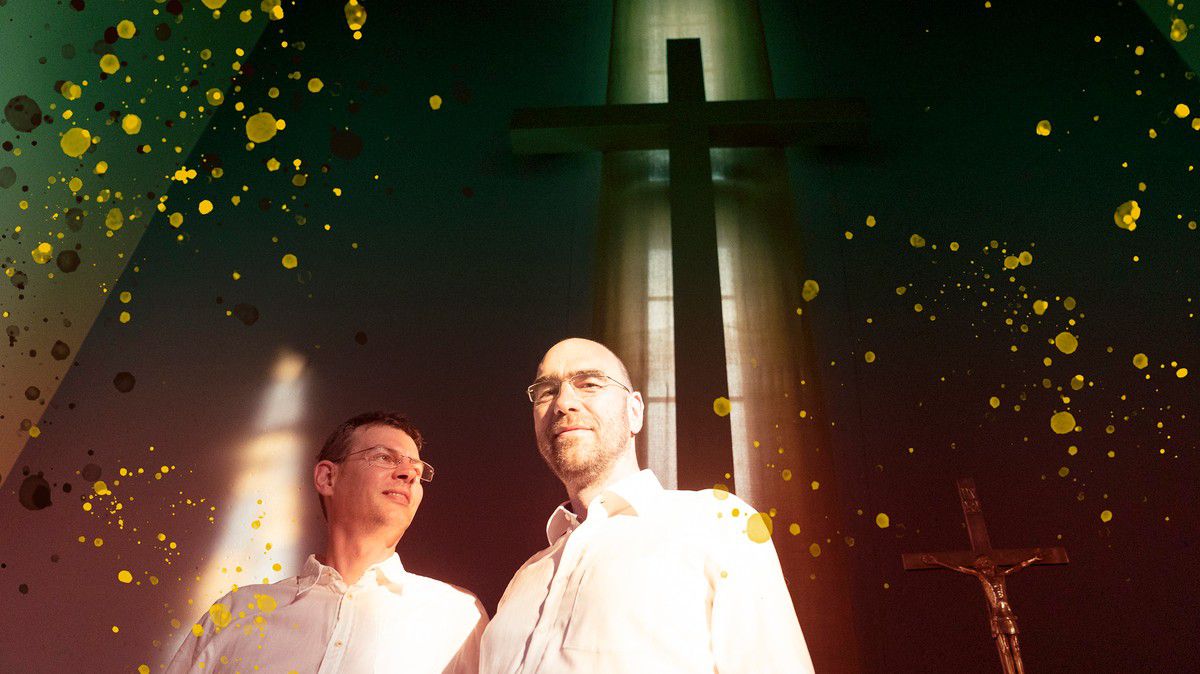 It's always been challenging for LGBTQ Christians to express their faith, because many corners of Christianity remain openly hostile towards the gay community. But what happens when you're not only queer and Christian, but you hold a position of authority within the church?

I spoke to six clergymen to find out what it was like to come out to their church community, how their congregations reacted and what they say to people who think it's a contradiction to be gay and a priest.

Lars Müller-Marienburg, 42, Superintendent of the Diocese of Lower Austria

"I knew early on that I was both gay and a Christian. Both my coming out and my 'religious awakening' happened at the same time. In school and at university I was openly gay. After one year of studying law, I changed to theology. At that point, I briefly considered whether I should keep quiet about the fact that I was gay to make things easier. But it quickly became apparent that I would lose all the freedom that I was blessed with and that I had worked hard for. That is why I have been honest from the beginning.

"I was turned away from a few communities that did not want a gay priest. The others knew it from the beginning and welcomed me with open arms. Being chosen as Superintendent was a different story: even though I've received a clear majority of votes, it's been difficult for many to accept that a gay person could become a high-ranking minister or a bishop. It's a minority, but a relatively loud one.

"Diversity in the church is important, because homosexuality and other sexual orientations are part of life. And in the church we should be concerned with life as it actually is. We should talk about homosexuality exactly how we talk about heterosexuality, which is always implied to be the norm in every scenario, from weddings to family time."

"The way the church treats homosexuality can make your life difficult - the implicit silence, the disbelief, the shame, the loneliness that comes with it, the fear of being called out. And all that, while your only wish is to become a priest. Pope Francis bolstered it even in 2018, when he said gay men are not welcome into the ministry.

"It's no secret that the proportion of gay men among priests is much higher than the estimated 5 percent in the general population. Why does this issue have no face, no story, no examples? When I came out, other people felt empowered to tell their story. The church has wronged many for a long time, and still does so when it considers homosexuality as inferior.

"Gay people shouldn't live a consecrated life. You cannot consecrate what is wrong under the eyes of God. But tanks can be consecrated? We see now that many gay people are turning against religion. They don't want to be tolerated, they want to be acknowledged and valued."

Ellen Radtke, 34, Priest at the Evangelical Lutheran Church in Hannover

"I'm married, so I can't avoid being out. But even before that, the thought of keeping who I am a secret never crossed my mind. I became a priest as my whole self.

"At the same time, I have met many people who did not want to come out. Women who had homosexual feelings, but who do not want to let anyone know. Men who said they were going to see their families at the weekends during our studies, but who in reality were staying at their boyfriend's. Behind all this, there is a lot of fear, which is what motivated me even more not to hide in the closet.

"All of my previous congregations knew that I was moving in with my wife in the parsonage even before they met me. What we needed was a little time to get to know each other, so that people could become more confident and discuss their insecurities openly.

"I have always worked far away from the big LGBTQ+ centres, in the countryside, where people simply don't have the vocabulary in their everyday language to talk about this, but to me that was basically the only difference. I don't know if anyone in my congregations would have treated me differently if I had been married to a man.

"When I talk openly about being a priest in the queer community, I often feel misunderstood. 'How can you work for this organisation?' they say. I understand this question, because behind it lie deep wounds. The church's proclamations, the way that queer clergy are treated, all these things have made it impossible for many to find a home in the church.

"I recently found out from a colleague that he did not want to baptise a child because the kid had two mothers. That was painful, both for the family and for me. But these are absolutely exceptions. The institution has changed. Of course my wife and I can live openly and proudly in the parsonage, and here in Lower Saxony we can also get married in church. But we must keep the discussion open.

"I can still remember how this theology professor used to say cheerfully that as long as 'the gays' didn't hit on him, he was fine with whatever they were doing.

"In my experience, gay women are treated differently from gay men in the church. As a woman, you are often already excluded from the camaraderie and the habitus men share anyway. Gay men occupy an in-between position, but sometimes you can notice they are being treated differently by the way other men of the church greet them. The church is made for men: clergywomen must acknowledge it, even though our numbers are rising. It's mostly heterosexual, white, family men who sit on the highest ranks. Who knows how many of them think like that professor."

"As far as I can see, no one in my congregation showed an interest in me being gay. Nobody has ever treated me differently. I can only imagine that it's not like this everywhere. My congregation allowed me to feel that everyone counts and should be valued as a whole person - and I'm very thankful for that. My sexuality was not the important part; what mattered was that I exercised my ministry with joy and attentiveness.

"Faith and homosexuality are not mutually exclusive. Whoever thinks that homosexuality is wrong from a Christian perspective is terribly mistaken. I firmly believe that people are very multifaceted and are made to be one-of-a-kind. Sexuality is part of that. Those who marginalise people based on their gender and sexual identity do not share my idea of God's love. For me, it's unconditional."

Jörg Zabka and Alexander Brodt-Zabka, both 50, Priests at the Martin-Luther Church in Berlin, and civil partners since 2006

Alexander Brodt-Zabka: I am who I am, and I was created by God in His beloved image. As a church, it's our job to make this truth available to people, unconditionally. In a society where performance and self-betterment are increasingly important, we need more than ever this confirmation from above. You are good, you are whole, you are beautiful - exactly the way you are. I have never made my identity an explicit topic of discussion, nor have I let anyone else do that. Who wants to discuss it with me is free to do so, but this is also true for other issues.

"Ten, 15 years ago, many were still not quite sure. Now, interactions with gays and lesbians are totally natural for most people in my church. For some, meeting me was a completely new experience, which they learnt a lot from. I've been rejected at times, in and outside of the congregation. But there are people who have looked for me specifically as a spiritual guide, because my example has empowered them to stand up for themselves.

"People in this country often hold the preconception that the church is particularly hostile towards the LGBTQ community. We see over and over again how certain groups feed off of these prejudices to score political points. As a church, we must do something against these prejudices. Loving your neighbour as yourself does not leave anyone out."