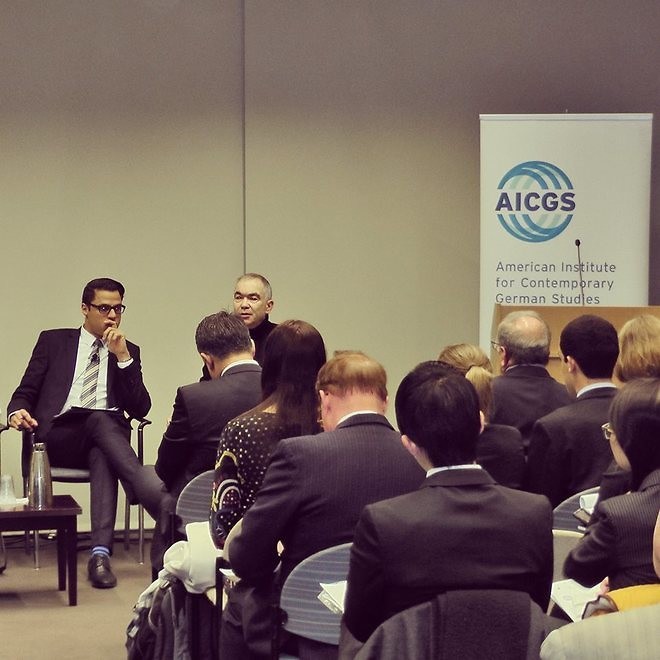 AICGS' conference on "EU Membership for Turkey: Endless Negotiations?" on February 7, 2014, featured panelists from Turkey, Germany, and the UK, including Ambassador Dr. Heinrich Kreft, Deputy Director General for International Academic and Educational Relations and Dialogue among Civilizations at the German Foreign Ministry. This conference was the second part of a trilateral dialogue on Turkey in cooperation with the Middle East Technical University (METU) in Ankara, Turkey, and the Brandenburg Institute for Society and Security (BIGS) in Potsdam, Germany.

Negotiations over Turkish membership in the European Union have spanned nearly a decade. Unfortunately, EU-Turkish relations now are as strained by political tensions as they have ever been, which, along with Turkey's recent economic success, has resulted in a focus on economics and trade. The United States has supported Turkey's EU membership since the George W. Bush administration and has largely refrained from criticizing its government. Thus, the relationship between the U.S. and Turkey seems to be strong, while EU-Turkish ties have deteriorated. Some of the panelists suggest a path forward would be for the U.S. to consider a Turkish role in negotiations over the Transatlantic Trade and Investment Partnership (TTIP) in parallel with EU accession negotiations.

Prime Minister Erdoğan met Chancellor Angela Merkel in Berlin. His travels were in part an effort to regain international trust after the Gezi Park protests and Turkey's EU bid, but also to seek the votes of the 2.8 million people living in Germany with Turkish passports. The Social Democrats (SPD) and Greens remain the strongest supporters of Turkey's accession into the EU. However, the CSU and CDU are not as open to Turkish membership and even partial admission has proven hard to achieve. This encourages Chancellor Angela Merkel to entertain open-ended membership negotiations without declaring a final goal. Germany could signal its support for EU membership for Turkey, however, by loosening its visa regulations for Turkish citizens who reside in Germany.

Panel 2: Elections in Turkey: What's at Stake for Europe and the U.S.?

The Turkish presidential and parliamentary elections will be held at the end of March 2014 and again at the end of August 2014. Currently, Prime Minister Recep Tayyip Erdoğan and his Justice and Development Party are favored in part due to his government's previous success and the past decade of economic growth-despite his government's response to the Gezi Park protests, recent corruption charges against him and his party, and an emerging balance of payments crisis. Prime Minister Erdoğan is known to have made many mistakes while achieving many positive results and, thus, is still perceived to be the people's leaders. If Erdoğan wins this coming presidential election, he will be the longest serving political leader "never in the opposition."

Prime Minister Erdoğan's foreign policy in recent years has become incoherent and unpredictable, making solid analysis difficult. Panelists cited his unsubstantiated claims that the United States incited a coup in Turkey just days after he visited President Obama at the White House. Some suggested this behavior was due to President Abdullah Gül and Prime Minister Erdoğan living in an "echo-chamber" and reflected the views of some in Turkey who choose to associate internal dissidence with foreign influence. It was argued that the United States should publicly denounce these claims and prove them wrong, but the Washington so far seems reluctant to criticize Turkey.

The discussion addressed Turkey's dual role as a Middle Eastern and European country. Some said that Turkish politics exist in isolation unrelated either to the Middle East or Europe, while others maintained that the EU's Copenhagen Criteria gave Europe substantial leverage over Turkey's foreign policy. Though Turkey has had success in promoting the democratic processes throughout the Muslim world, the West has perhaps mistakenly believed Turkey to be a cooperative player in the Middle East and that Turkey's soft power in the region is exaggerated. The civil war in Syria was acknowledged as a critical problem for Turkey and one that it is committed to addressing, but its policy is now stuck between calling for Assad's downfall and having little means to bring it about. It was brought up in discussion that President Gül would like to refine and recalibrate Turkey's purely anti-Assad stance on the war, but that it is unlikely to happen. Ultimately, the panelists reiterated that it is difficult gauge the country's foreign policy given Prime Minister Erdoğan's changing stance on various issues.