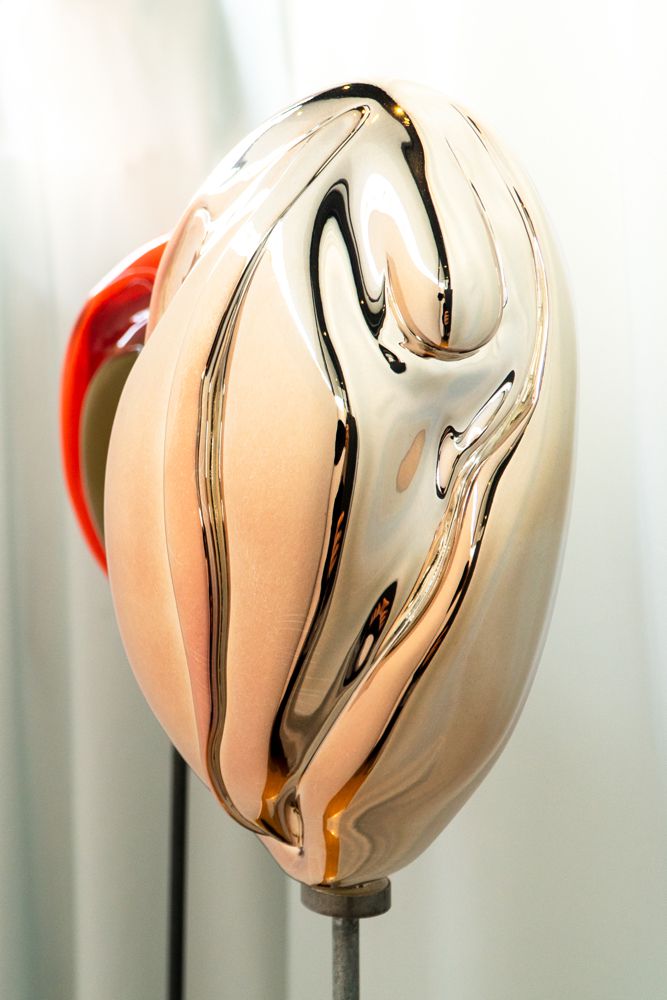 The female genitals are often seen as representing temptation, lust, pleasure and fertility, but they're much more than that. It's time to look at our body and gender in a different way from what society tells us we should, and the art collective Vulvae have made it their mission that we do

Founded by Ellebasi Gorenpeng and Ida Aniz, the Berlin-based collective Vulvae deals with the topics of body, sexuality and gender using its protagonists' artistic background to approach the subjects from a different perspective. Vulvae questions common beauty standards, talks about what is generally seen as taboo, celebrates imperfection and does not care for binary attributions.

Ida and Ellebasi, you are the initiators of Vulvae. How do you know each other?

The collective brings together artists from different generations, countries and disciplines, including illustration, painting, photography, film, sculpture and installation. Some of their projects are intended to provoke: they conquer public spaces to raise awareness, they make caramel vulvas that are served them at one of Berlin's Michelin-starred restaurants to make people think again about our natural bodies, they have created a huge clitoris sculpture called Clitozilla as a way of teaching about the female genitals. They dedicate their creative energy to fighting for self-love, acceptance and confidence and overcoming the clichés. Join their fight.

Was there something in particular that happened that led you to found Vulvae? How did you come up with the idea?

EG: "We've known each other since 2016. A mutual friend introduced us at [the counterculture music and arts] Fusion Festival. We noticed how much fun we had playing with stereotypes about men and women, especially in the surroundings of the festival. I still haven't fully appreciated what's happened since then and I'm incredibly happy and thankful - not only for the birth of Vulvae, but also for my fantastic friendship with Ida."

EG: "Ida brought my attention to the documentary Vulva 3.0 by Ulrike Zimmermann and Claudia Richarz. This movie deals with a lot of aspects regarding the public's perception of the vulva - the historic and medical-anatomic perspectives - with sexologists, psychologists and many others sharing their knowledge."

What's the idea of Vulvae? What does it stand for? What message are you hoping to spread?

IA: "The documentary deals with topics such as labiaplasty and beauty standards that affect us subtly and permanently. This trend of beautifying 'down below' wasn't really on our radar, to be honest. The movie woke us up and so we started to deal with topics such as the human body, feminism, sexuality and gender in an intellectual and artistic way. Our art is not simply about the vulva, but about the perception of femininity and gender in toto."

EG: "As a postfeministic art collective, we want to create a new consciousness about body, sexuality and gender. With the help of our art, we show the body as we see it - with all its beautiful, alleged 'imperfections', which is actually colourful and diverse to us. We don't work with terms such as 'man', 'woman', 'young' or 'old'. Personally, I have found really loving ways to access my own body and sexuality through my art - and these are exactly the experiences and values I'd like to share."

Do you really think that talking about female body parts or publishing photos of them is still taboo in our society?

IA: "It sure is a taboo, but we have also noticed that something is changing. There are a lot of 'vulva artists' and like-minded people on Instagram who are dealing with the female body in different ways. We are part of a movement that doesn't want to be limited by outdated censorship or questionable standards."

EG: "Society perceives the female body and the vulva in a pretty biased way that's connected with media-propagated beauty standards and pictures of genitals seen in pornography, leading to us changing our bodies, even our intimate parts. Images and bodies that don't meet these standards are considered offensive or ugly."

IA: "That's why it's even more important to talk about our bodies and the improvement mania - and to question them. This concerns women and men equally."

What would you like to change in people's minds through your art?

EG: "And when it comes to the language we use, we deny the existence of the vulva by talking about the vagina when we actually mean vulva. With that, we nullify the part of the female body that plays the strongest part when it comes to sexual pleasure. Even how we refer to it is connected to shame, provoking negative associations."

What do you think is tempting about the vulva?

IA: "We want to change the perspective, not only of our bodies, but all bodies, in a positive way. We want to make our recipients question society's standards and censorship - without a raised forefinger, but with joy, openness, curiosity and humour."

EG: "Primarily the vulva is an organ connected to sexuality, but that's not its only role. And it's important stress this, because we are much more than just a penis or a vagina. And our genitals are more than instruments of sexual pleasure."

You're currently collaborating with a well-known restaurant in Berlin, with diners being served vulvas made out of caramel. How did you come up with the idea? And how have people reacted to it so far?

IA: "The vulva is connected with sex and fertility, but it also stands for the female mystery that still hasn't been explored and decoded. This combination is especially what makes it so exciting and seductive."

EG: "We're collaborating with the restaurant Nobelhart & Schmutzig because we both wanted to create more naturalness and freedom in art and in the kitchen. With them we question the current norms of foods and the human body, especially in connection with female genitals.

"With the project Feel the V! we want to involve different senses and show alternative images of the vulva. We want to see, experience, feel and even - in an abstract way -taste the vulva without it being in a sexual context. So we created a small delicacy in the shape of different, lifelike vulva imprints, with the aim of making people think about our consumption of images and foods."

How do people react to Vulvae in general?

IA: "It's a daring project that has attracted a lot of attention. Many visitors are surprised when they see their caramel vulva. That's why it's important to understand the message behind them - acceptance of our natural bodies. Seeing the caramel vulvas initially from a sexual point of view says a lot about the over-sexualized perception of the female genitals."

EG: "People are more interested than shocked. They're usually curious, sometimes irritated or amused, and some are disgusted - if puking emojis on social media count."

You collaborate with different artists, what future projects do you have in store?

IA: "Most of the reactions are very positive - from both women and men. I've seen a lot of sudden insights on the diners' faces."

EG: "The special thing about our collective is that we all come from different generations and different countries. We welcome everyone to our collective who would like to deal with our message in an artistic way - so it's not just for female artists. There will be performances at some festivals, social projects about sex education and various art installations. We meet at the Vulvae regulars' table once a month - everyone is welcome!"