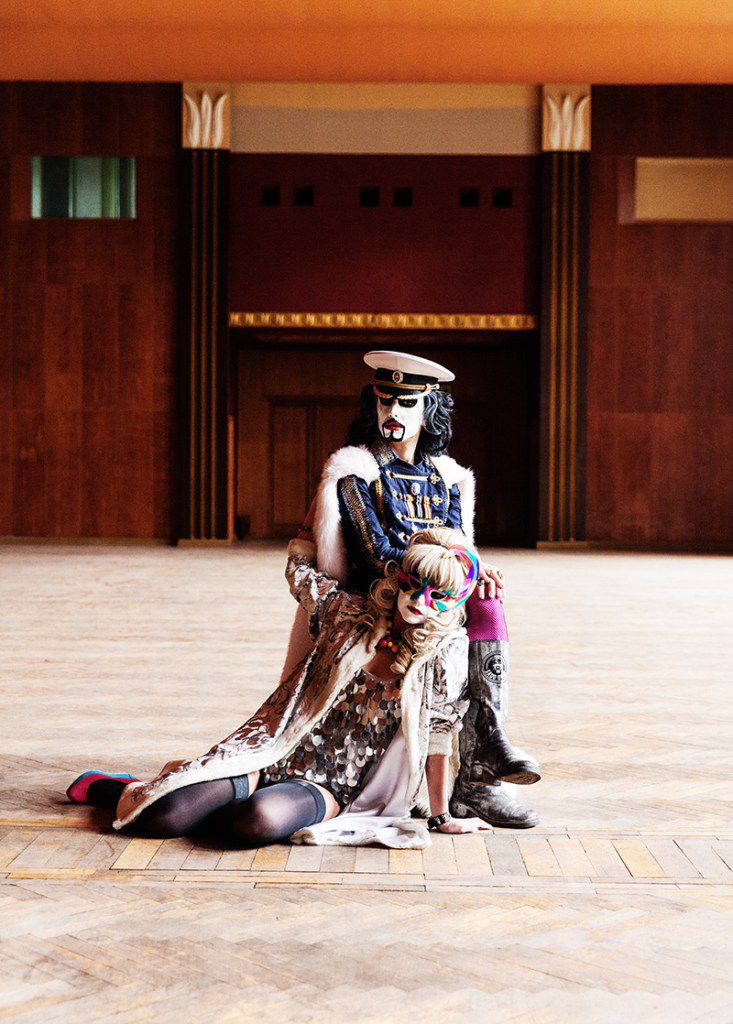 Colonel (Herr Oberst), Magic Doll, Wild Man and Mr Adolf - passionate performers and 'direct descendants of the Marquis de Sade and his servant'. Welcome to a night at the SADO OPERA

What is SADO OPERA?

"We're a visual music band. And with the sources that our artistic activity allows us, we want to bring to the world more joy, playfulness, unity, equality, fun and confidence."

Most of SADO OPERA's members come from Russia. Since homosexuality is illegal in Russia, how do you feel about performing there? And what sort of reaction do you get?

"Half of the band is German - from both East and West Germany, but we love them just the same. And as for Russia, well, homosexuality itself is not illegal there - its federal law forbids so-called homosexual propaganda. Still, society there is extremely homophobic and aggressive towards the LGBT community. When we were still living in Russia, we were prominent on the gay scene in St Petersburg and Moscow. Inside the clubs, everything was mostly 'happy and gay', but when you stepped outside, you were exposed to a world of danger and repulsion. Unfortunately, anti-gay fanatics would sometimes also break into the clubs to beat people up. Some of our gay friends have been verbally and physically abused on the streets for looking like a пидор - Russian for 'fucking fag'. We also had problems with the Russian police, just because Colonel was wearing make-up and nail polish... But this aggression in people is generated a lot by the system itself. The government is using and creating phobias as a way of manipulating minds. And that is partly described in our song Russian Anal Game."

You proclaim that you are the descendants of the Marquis de Sade and his servant, so who do you actually come from?

In some of your lyrics you sing, "They say you're different. They say it's a serious disease." You don't care, do you?

"These lyrics are from our song called Kissing the Gay Guy. It is about the belief some people hold that homosexuality is 'a disease, a sin, a virus'. Unfortunately, that is still a common point of view in many parts of the world."

What does "being different" mean for you?

"Actually the 'being different' is more a judgment of the perspective of 'others'. We think it's more important for each individual to find his/her/its real inner self and let it grow and love it and let it out and let it have fun and make friends and make love. We all are different in one way or another. All genitals are different, all breasts are different. And that is beautiful, isn't it?"

During your performances, you are known for passing around chocolate-based "magic candies" - sweets laced with a sexual stimulant, some say. What effect do they have?

"They make you feel good - really, really good. As if you are having the most amazing sex with the person you are deeply and freshly in love with. And this person thinks you are the best partner in the whole world. Wanna try?"

Who is responsible for what in the band? Who stands for what?

"We are all one big family and, though we are brothers and sisters, we do sleep with each other and everything we do, we do together. But on stage everyone does what he is best at - Colonel sings and dances, Wild Man plays bass, Mr Adolf plays drums and Magic Doll does a bit of everything. Colonel is a passionate soldier and brave lover. He stands for order in love affairs and for 'gender blending'. Wild Man is an aggressive hedonist. He loves food, flowers and women. Mr Adolf is a big dreamer and a true pacifist. He dreams of a world without borders or prejudices. Magic Doll stands for the magic power of girl power."

If you had a time machine, when would you go back to?

"Actually, time travel is the only thing that really excites Magic Doll. Her only sexual fantasy is to sleep with a time traveller. So we are sure that, if we had a time machine, Magic Doll would have it for her sole use and just go back and forth in time - all the time!"

Does SADO OPERA have a motto?

"We even have two. The first is, 'We love you! We must be together!' And the second is, 'Elegant and obscene!'"

What do you want to change in this world?

"The world is perfect and wonderful. The only harmful element in it is human stupidity. We think we and all thinking creatures have a very important task to carry out - to defend, to save and to develop as many of those vulnerable, beautiful things and to help as many billions of people as we can to fight this stupidity. And to do this, we have to fight like soldiers. Not like a military army, of course, but more in your Swedish way - like an army of lovers."

You once said you are helping people in this world. What exactly did you mean by that?

"We are a big, polyamorous family. And there are many more members in this family besides the band members. We are open to all who need support and tender care because they are 'different'. We have already helped to heal a lot of broken hearts, and we have treated them all as our children, whether they were 18 or 80."