Isolation researcher Jack Stuster studies the working relationship of people under extreme conditions. In research stations under water or below polar ice, on remote oil platforms—but especially in space. What can we learn from him?

You have been advising NASA for 36 years. What is needed to keep astronauts in space feeling comfortable and working well together?

Communal meals, contact with their families, a place to retreat for some privacy, entertainment such as games or movies, a feasible and meaningful workload, clear rules about communal living, and a great deal of understanding—both from the mission planners on Earth and from their colleagues in the space station. Actually basic things, but things that are not always easy to achieve hundreds of kilometers above Earth.

I’m told that you had a large dining table set up on the ISS where the team comes together once a day.

There was a table on the ISS from the beginning, but it didn’t have enough space for all the crew members. So I pushed to make it possible for all of them to eat together. This is now the case. Other things also happened in response to my recommendations. Separate sleeping compartments, for example, and a cupola from which the astronauts could view and photograph Earth. I had that idea from my research on living in an underwater laboratory. You have to look in the most unlikely places to gather experience for outer space.

You study good teamwork under extreme conditions. Can your findings be applied at all to ordinary people?

Yes, definitely. What initially surprised me most from my work is how similarly people behave—regardless of where they are and under what conditions they come together.

What is the most important lesson we here on Earth can learn from astronauts?

Something that I have always tried to achieve with my own family, namely getting together at least once a day to share a meal and talk with each other. This sounds trite, but it’s very valuable. There is simply no better way to get together and relax. But of course there’s much more that we can learn. Over time, I put together a list with about 30 items.

A group must agree that their top priority is to get along well with each other. Every person must do what it takes to make this happen. That includes being polite and respectful of others. People have to pay attention and support one another. It also helps if people go above and beyond what they’re required to do—and without bragging or complaining. You have to avoid controversial topics, and also avoid belittling other people—even in a joking way. Making fun of others is toxic for groups. Everyone has to think ahead of time about the consequences of their words and deeds, and if in doubt, err on the side of caution. This is the most important lesson, and it’s especially important for everyday things: Don’t leave stuff lying around, clean up after yourself, keep the common areas tidy. For men: Always lower the toilet lid and replace the toilet paper when the roll is empty. 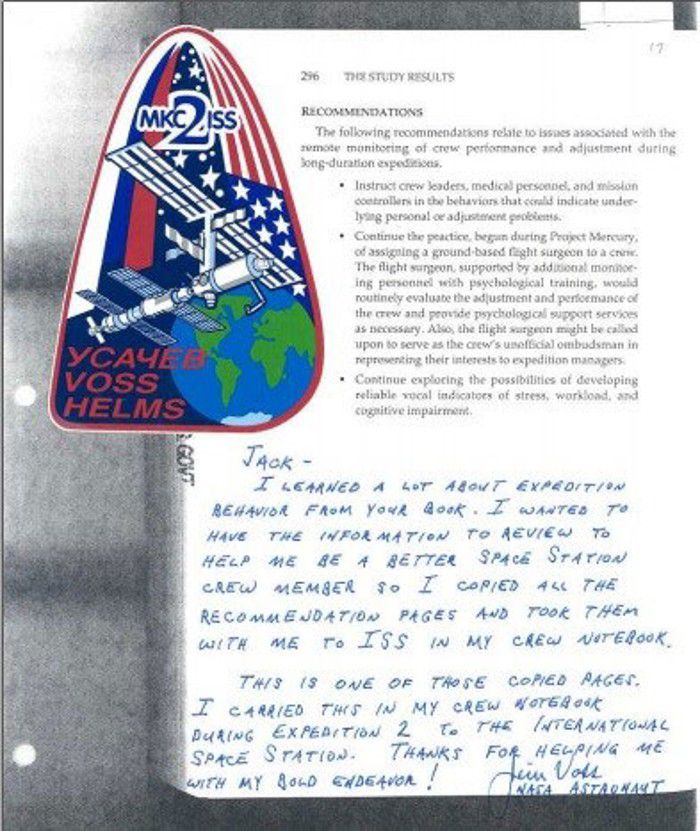 Excuse me, but this sounds more like kindergarten than a space station.

Yes, the rules are simple. But it can be very difficult to think about the simple things. And yet, in outer space you have to do this. Otherwise, under stress, in crisis situations, or simply over time, the group can’t function. With a view to future Mars missions, the rules become even more important, because the astronauts will spend a great deal more time together. Even the trip to Mars alone will take at least six months, and the whole mission presumably three years. Imagine that you were confined in a camper with five other people for more than three years, slowly traveling all the way across the United States. You can’t get out, and you already know the other people very well from the time you spent getting ready for the trip. Not a pretty picture, is it?

I shudder just to think of it.

And that’s a piece of cake compared to a Mars mission. This is why you need clear rules that everyone takes to heart. Observing individual people under extreme conditions is a little like looking through a microscope at all of humanity. The essential things stand out, greatly magnified.

What do you see under this microscope?

Small groups in space have experiences similar to those of large groups on Earth—but greatly exaggerated. Tiny differences of opinion, thoughtless statements and perceived boundary transgressions quickly become real problems. On Earth, most of these have very little impact, but in outer space, trivial matters turn into conflicts. This is also clear in the journal entries. Astronauts can sometimes rant for page after page because someone hasn’t closed their laptop or put away a tool.

What kind of journals?

For 13 years now, I have asked the various members of the ISS to keep a journal for me—and of course, I keep the contents strictly confidential. The main theme in these journals is the workload. More precisely, the stress that arises from errors in planning the mission. Mostly, this has to do with unrealistic time expectations on the part of the ground crew, because in the weightlessness of space everything takes longer.

People in ordinary office situations also complain about the workload.

What a group is expected to achieve significantly affects their performance. Unrealistic assignments undermine the performance of the entire crew and have a negative effect on teams. If expectations are too high, people have the impression that they are always falling short—which causes frustration. On the other hand, if a team is insufficiently challenged, the members soon begin to feel useless. Astronauts are particularly susceptible to this, because of course they have been thoroughly prepared and have outstanding capabilities. If they aren’t given meaningful tasks, they feel like overqualified janitors.

People in ordinary office situations also complain about the workload.

What a group is expected to achieve significantly affects their performance. Unrealistic assignments undermine the performance of the entire crew and have a negative effect on teams. If expectations are too high, people have the impression that they are always falling short—which causes frustration. On the other hand, if a team is insufficiently challenged, the members soon begin to feel useless. Astronauts are particularly susceptible to this, because of course they have been thoroughly prepared and have outstanding capabilities. If they aren’t given meaningful tasks, they feel like overqualified janitors.

On the ISS, astronauts from various countries and cultures work together. Does this lead to problems?

There are major cultural differences, of course. But astronauts soon create a sort of overarching culture that functions independently of their backgrounds and the events on Earth. It’s a culture that largely compensates for differences and puts the focus on common goals. Astronauts know they have to work together like this, because their own survival depends on it. That’s a fairly strong incentive for cooperation.

Would you like to travel into space yourself sometime?

In the past, I would have said yes right away. Not any longer, because now I have a family. I think people who have children shouldn’t be flying into space. That’s why I’ve also recommended sending childless married couples to Mars. It will surely be easier to cope with the long timeframe if the astronauts aren’t missing someone and don’t have to worry about their loved ones on Earth. Here is how I view my role today: I want to help ensure that the human side of space travel works well. Sometimes I feel like an advocate for the astronauts. Whether it’s mail carriers, assembly line workers or astronauts—every group needs someone to advocate for their needs.