Rembrandt's first masterpiece at the Morgan 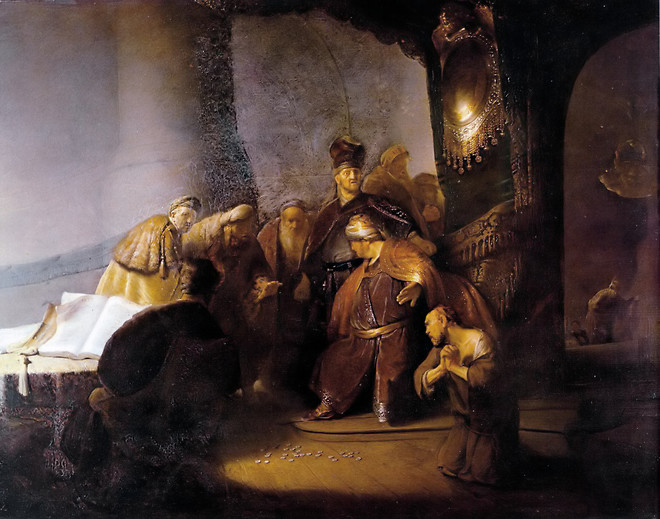 When Rembrandt van Rijn was just 23 years old, he was already a rising art star in his hometown of Leiden. There, Constantijn Huygens, the Dutch art connoisseur and adviser to Frederick Henry, Prince of Orange, came to visit his studio in 1629.

Sitting on Rembrandt's easel was a new painting that knocked Huygens socks off--or to be more accurate, knocked his stockings off. It was "Judas Returning the Thirty Pieces of Silver," now thought to be Rembrandt's first masterpiece.

We know how Huygens felt about the painting because he described the work in his autobiography:

The gesture of that one despairing Judas... that one maddened Judas, screaming, begging for forgiveness, but devoid of hope, all traces of hope erased from his face, his gaze wild, his hair torn out by the roots, his garments rent, his arms contorted, his hands clenched until they bleed; a blind impulse has brought him to his knees, his whole body writhing in pitiful hideousness ... Even as I write these words I am struck with amazement. All honor to thee, Rembrandt!

It sounds like Huygens is watching an opera, not gazing at a static canvas. There's no doubt how much the painting moved him.

Rembrandt must have eaten up the praise. He surely knew he deserved it. The young prodigy was already toppling the artistic conventions of the day with his hyper-kinetic compositions and extreme use of light and shade.

His painting of Judas is an example of the off-beat approach he would take throughout his career: the off-center grouping, the strange, deep shadow in the lower left section of the panel, and the mysterious figure disappearing into the murk on the far right. This is not the way painting was taught in Amsterdam. Rembrandt was staking out his own ground.

You can see this rarely-exhibited, singular painting--which comes from a private collection in Britain--at New York's Morgan Library & Museum, between June 3rd and September 18, 2016. After that, it may disappear from public view again for decades. One never knows.

Exhibited near the painting are five drawings Rembrandt made while planning his scene. From these, we can see how he rethought the way he would group the figures and the architecture of the temple where Judas plays out his final act.

For Rembrandt, it was all about the drama, how he could intensify the emotion. But he also paid close attention to the human form, sketching a model's bare leg in red chalk, to make sure he had the angle and perspective right, even though the priest's leg would be covered by a robe in the painting.

Elsewhere in the exhibit we see a little self-portrait in brown ink the young artist dashed off around this time. He's got a serious expression and a tousled bed-head of curls that suggests he's much too busy to comb his hair.

Better yet, is another self-portrait, a fabulous little etching from the following year, where he furrows his brows and pops his eyes out at himself in the mirror, his lips parted in mock-surprise. What have we here? He seems to ask. A homely young man who just might become the genius of his age!

It's this dance of the beautiful and the ugly that makes all Rembrandt's work so compelling, that brings us back to stare at each piece again and again. More than any other artist, he shows us the two forces as they circle around each other, like two fierce lions, each trying to dominate the other.

The Morgan's show is perfect for getting a grip on the artist. Although modest, it offers some of the basic tools necessary for understanding Rembrandt's early years and where he was heading.

Conceived and organized by the thoughtful Per Rumberg--who has since moved on to the Royal Academy in London--and installed by John Marciari and Ilona van Tuinen, from the Morgan's department of prints and drawings, the show has a harmonious, clear vision that's especially refreshing in this era of flashy blockbusters. If you'd like to meet the young artist who was poised to change Western painting, this is a fine place to start.