"I am not concerned with the application of paint." 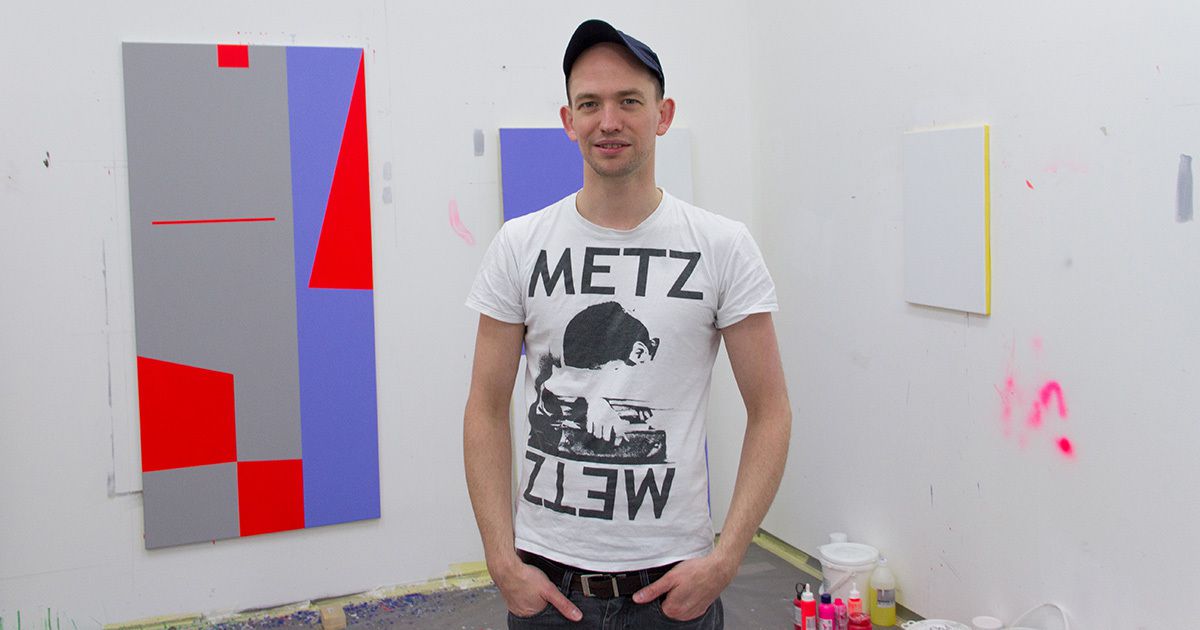 Nick Oberthaler's paintings imply a conceptual superstructure: color and surfaces assume a codifying role, opening up references to fields such as image theory, art history, the natural sciences and philosophy. He seeks to question inherent conventions rather than to describe a vocabulary of form. We visited Nick in his studio to learn about the conceptual depth he applies to his work and why he values discourse over the essential process of painting.

Nick, you began studying art at the age of eighteen. Why art, and how can one already be so sure at such an age? I actually wanted to go into commercial graphic design. Coming from a rural area - I come from the Salzkammergut - one does not have a concrete idea of what makes up the context of contemporary art. You just want to move to the big city, leave the provinces. If one wants to go into a creative direction, applied graphic design would seem to suggest itself. At the time, I spoke with a friend who studied at the "Applied" (University of Applied Arts Vienna). However, the courses there appeared too narrow and too school-like to me. So I arrived at free art and then studied painting at the Academy of Fine Arts Vienna.

In the meantime, you have left your beginnings as an artist far behind you. What has remained from your art study? Of course you take things with you, you get an overview of art history and learn to classify things. Beyond the field of artistic practice I have never felt the urge to work theoretically or scientifically. Art education was not valued in the way it is today. Recently however, and for the first time, I have written a short exhibition text for an artist friend - that was an interesting experience. How does one actually write something like that? How does one address another artist's work textually?

You say you don't work scientifically per se, you are not an art theoretician, but you do weave many art theoretical themes into your work, don't you? Yes, I think my artistic work has to a certain extent to do with theoretical exploration and I think it is necessary to include it in my own practice.

You don't deal exclusively with art theory. Often, your references originate in philosophy, sometimes in the natural sciences or in politics, that is, in fields that have nothing to do with art. The contents with which I work originate from various fields: Image theory, fiction, scientific essays and day-to-day political reports. I actually wander constantly between different areas of subject matter; it is quite rare for me to read something in one go, rather I pursue a kind of rhizomatic reading method.

The French philosophers Gilles Deleuze and Félix Guattari used the term rhizome as a metaphor for a postmodern or post-structuralist model of knowledge organization and description of the world. According to their theory, knowledge is not imparted in a linear strand or on one level, but three-dimensionally and anti-hierarchically. My approach to research and my work process are similar.

For example, how did you come to "Distinct Features of Fast Oscillations in Phasic and Tonic Rapid Eye Movement", as the title of your exhibition at Galerie Emanuel Layr in Vienna in 2016? At the time, I had read a text by Jean-Luc Nancy, which dealt with the description of light, its perceivable fractions and the question of the so-called distinct in painting. I am interested in such image theoretical questions: What does the image take from reality? How is a new reality formed by coding? And what is the relationship of the viewer to it?

One paragraph in the book is entitled "Distinct oscillation". I did not only like this word combination, I also thought the relationship of text and image in regard to painting was interesting. While researching on the web I accidentally came across the article "Distinct Features of Fast Oscillations in Phasic and Tonic Rapid Eye Movement" in a neurological journal that described the oscillation profile of the phasic rapid eye movement), a form of REM sleep. I felt the sentence was appropriate as a title in regard to the concept of the exhibition. I also think that the use of language is also a possibility in adding further levels of meaning to the (visual) artistic practice.

So you are not concerned with painting only colorful surfaces in your pictures, even though it may look that way to the viewer at first glance. Yes, that would definitely be too boring for me. It is important to me to pursue this semantic research, during which you discover various things, which serve the interpretation. From this amalgam forms something like a story, a conceptual superstructure. At the same time, my artistic practice is extremely heterogeneous. I am more concerned with a kind of setting: the relationship of images to each other, the constructing of exhibitions as situations...

Would you call yourself a genuine painter? I am not really sure myself (laughs). The mere fact that I apply paint to a surface does not mean that the work can be exclusively derived via the discourse of painting. I am not the type of painter who is mainly concerned with form and composition and the process of the application of paint or material.

More important to me than the painting process itself is the creation of a context into which the picture has to be integrated so that it receives authorization. I actually spend more time in the studio working with vector programs on the computer or with the cutting of stencils and templates than with the actual painting process.

Connect with us Subscribers are the first to learn about new stories and editions and will receive our weekly Culture Briefing.