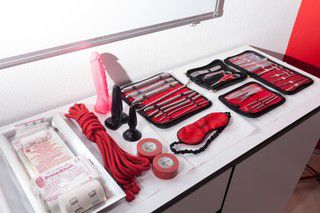 Bordoll stands between a semi-detached house and a metal workshop in a quiet corner of south Dortmund, Germany. The unassuming red-bricked shop doesn't draw too much attention to itself-the sign on the door is small, and black foil covers the windows. But behind that, you'll find Germany's latest sexual innovation-the country's first sex-doll brothel.

Human-size sex-toy enthusiasts can choose between 70 such brothels in Japan, while the first of its kind in Europe opened in Barcelona in March 2017. From a management perspective alone, Schwarz was eager to bring the concept to Germany. "The dolls are ideal employees," she tells me as we step inside. "They're always here because they're never sick, they always look good, and they offer all three holes with no complaints or extra charges."

But who pays to have sex with a doll? "We get a huge range of people," she explains. "From 18- to 80-year-olds, from unemployed people to prominent judges." Schwarz estimates that 30 percent of guests just want to experience what it's like to have sex with a doll, while 70 percent become regular customers. Some of Schwarz's clients travel for miles just for the experience-something she puts down to the quality of her dolls.

"These are Next Top Model standard girls," she boasts. "Most guys would be too intimated to approach a real woman if she looked this good."

While giving me a tour of the brothel, Schwartz points out that many of her clients like the dolls because they're not sentient. "Many of our guests see it as an opportunity to freely try out things they've seen happen in porn," she says. Some of her customers, she suspects, have never had sex with a woman, because "they are shy, almost afraid of women." For other men, it offers an alternative. "Their wives or girlfriends have their own needs, while a prostitute in a brothel has limits on what they will and won't do, sexually," she explains. "But our dolls do everything they want, in any position they like."

She tells me one of her clients once explained it to her directly. "He said: 'I know what I am doing here is bizarre and creepy. But normally when you want to have sex, you have to consider the other person. You never have to ask the doll if she's having a good time-I only have to think about my own needs.'"

In the initial test phase, the dolls could only be booked on Sundays. But soon, the demand was so high that Schwarz had to dedicate six full-time rooms to her new venture, and received glowing reviews of the experience on the brothel's website. "I had big expectations that were completely surpassed. I had tons of fun, and the time went by quickly. I was destroyed afterward," one happy customer wrote-though he goes on to mention that "Naomi is really heavy and her joints were still a little stiff." Another described how having sex with his doll was "95 percent" like sleeping with a real woman.

On display in the lobby is Sabrina-her fake lips painted red and eyelashes stuck above her plastic brown eyes. Her online product bio lists her specifications as: "Vagina: 18cm; Anus: 16cm; Oral: 13cm; No pubic hair." Schwarz paid around $2,300 for Sabrina. "Try it," she demands. "They bend relatively well." Sabrina's boobs feel like overripe tomatoes, though her nipples feel more authentic. Her silicone skin sticks to my hand like raw cookie dough.

"Anna is the star of the team," says Andrea, who helps Schwarz run the brothel. "Everyone requests her." The 55-year-old points to the five-foot-one, blond, and blue-eyed doll on the opposite sofa. "The first Anna had her backbone broken," Schwarz adds. "That's actually Anna number two."

Today, Andrea is working the morning shift-answering phones, greeting guests, cleaning rooms, and preparing the dolls for customers. Preparation involves taking a used doll out of the room and disinfecting it. After that, she combs the doll's hair and dresses it in lingerie and nylon stockings. Andrea doesn't want to get into the details of the cleaning process, which can take up to 30 minutes. They're top secret tricks of the trade, she tells me.

As we walk around, and while Andrea inspects the dolls, it becomes harder to ignore one glaring, slightly worrying feature of these sex toys-their childlike faces and features.

"The dolls are all very womanly," Andrea pushes back when I ask if she's comfortable with customers being attracted to something that looks so young. "They have butts, hips, and big boobs. There is nothing childlike about them."

Nevertheless, the brothel caters to clients with a "classroom sex fetish." One room is kitted out with school desks and a blackboard. But Andrea is adamant that the venue merely offers an alternative, safe space for people to act out their fantasies.

That's about as far as the rules stretch. Most people leave the dolls in good, working order, Schwarz tells me. One man, however, quite literally penetrated one of the silicone ladies.

"He created a second asshole," Schwarz laughs, lighting a cigarette she's taken from a silver case with a portrait of Che Guevara on it. As a teenager, during a "short-lived pseudo-punk phase" she had a thing for Guevara, she tells me. "It probably had something to do with the way that I do my own thing no matter what people say, like he did too," she says. "So many people in the industry laughed at me when I first introduced the dolls. But nobody is laughing now."