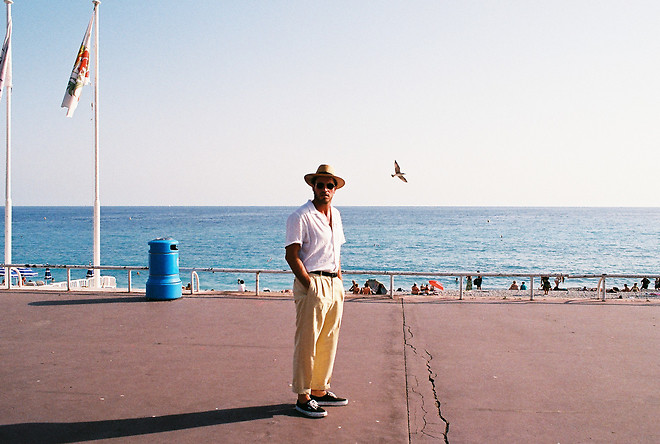 I had to leave you. For a lousy 24-hour hotel near the airport. Furnished with a huge inferiority complex and extras with extra costs. Large TV, no smoking and tap water as yellow as the sun. People come here so they can leave again soon. Not pretty, just pretty close. Breakfast is served from five to ten - the worn-out carpet leads the way. I was stuck. Left to my own devices. No longer here, but still not there. Somewhere in between with room service and Rocky 2. Loaded with thoughts, which won't stay on topic, demand attention, or still wait at baggage claim. In a land far away, where everyone is done eating by six p.m., and taxi drivers are paid through nightlife-stained safety glass. They're distant, on the wrong track. Their pubs reek of floorboards and spilt beer. A sweet stench that has expanded throughout the entire Commonwealth. A squandered spirit that awaits re-ignition. A hazard that lurks and lingers violently in the air. Testosterone seeking liberation. Manners feel a tad too tight and, after the third pint, speak only of fucking. Almost yodelling, like an animal on heat in a well-pressed suit. Wrapped in a thin sheath of pleasantries every morning, which is crudely overstretched. Then there's the smug satisfaction, which necessitates special power sockets for further illumination. England maintains its ugliness well - even its most beautiful corners are somehow blemished. But beneath its cling-film-preserved tradition, there are a few foolish rules you can break. Curfews and coppers on horseback striving to defend what's good without real guns. Every few meters lies a small pile of shit on the street, with space in between for puking on weekends. Hardly anyone smokes, but everyone likes chips and lives in stone houses that are old, and distinguished only by numbers. I want to smash this serenity, this entire city. All its bricks and windows, its scissor-trimmed gardens, all its no-parking signs. Everything. Only the red phone boxes may remain as reminders of the good old days. Days that you now only experience on airplanes or on Mount Everest. Up, above the clouds, in heaven, where the Internet has no say because only the word of God rules there. How low can one go to get published? Crawling through pubs with retired policemen, burning five pounds for a beer, skipping stones on the beach with a hangover the next day. Happiness feels the same to all, only the path there is different for each. Some need fish and chips, after-work drinks and Manchester to win. Others have to fly away, get stuck, watch Rocky, write everything down, then fly back again to feel something, anything in their bowels besides English food. It's as if there are two people living inside me. One works and toils, the other sits in an armchair, eats bacon with melted cheese without getting fat, watches movies, and diligently dictates what I should do and how I should feel. Like endless subtitles that comment on everything, even when you stroll silently and only speak now and then to make sure that you're still here and not elsewhere. With your thoughts wandering to Lisbon or buried under your own notes. Thoughts that need constant attention, like a fat English kid doubled up from hunger, asking if my chest muscles have shrunk because they look so unused in this large mirror, onto which the light shines inopportunely. Or if my new Levi's 501s aren't cut a touch too straight and pinch the balls. There's a pervasive pressure. A subtle fear that at some point the penis might curve around the world if people continue to masturbate with their right hand. Outrageous how far our thoughts can drift. Each of us. Me, and the oh-so-great British. With their shaved legs, made-up faces, good manners and ancient churches, in which you must remove your hat but may keep the filth in your head. A nation that's no match for its own rules, and whips its beast until the holidays, just to unleash it in Lisbon [...]