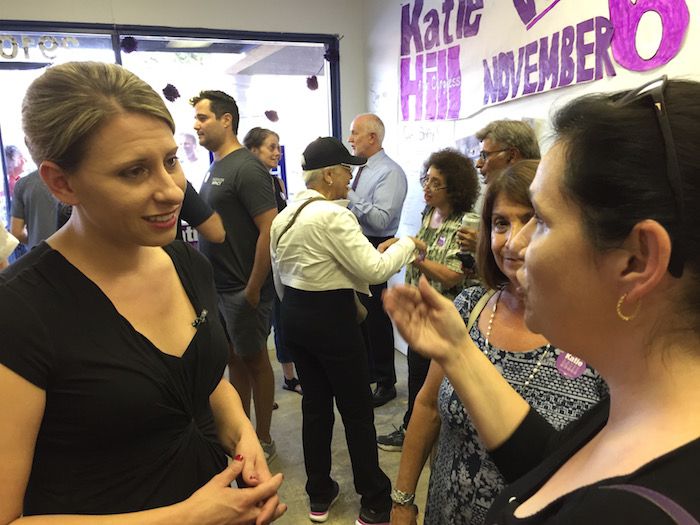 One by one, the young women step up, onto the black plastic folding chair. Each of them mutters something addressing its flimsiness.

"I will fall off this thing."

"I hope I don't break this chair!"

They didn't trip or fall or break the thing. No, they stood up and spoke eloquently about voter registration, about poll numbers, and about the power of unified action. The field organizer had asked them to share some fun facts. His being that he is an aeronautical engineer who shot and starred in a movie in Romania.

The young women's fun facts: one is a classical trained sushi-chef, one speaks three Roman languages and another one is an award winning athlete.

The athlete introduces herself as "Cat". She is 16 years old. She has been volunteering for this campaign since March. She makes phone calls. She canvasses. She puts signs in front yards. She updates the office-calendar.

Now she takes a deep breath and puts her feet firmly on the folding chair. Her wide smile exposes the wires of her braces.

One strand of curly hair falls out of the ponytail over her face. Mascara is the only make up she used. A white T-shirt with the candidate's name in purple print falls loosely over her jeans. Her gaze wanders over the crowd in the room.

Cat looks confident, excited and determined. She sees more women than men gathered to support the candidate, Katie Hill, a 31 year old advocate for homeless people who wants to conquer the last Republican congressional district in the area.

Cat sees colorful shirts, skirts and hats. She sees signs demanding healthcare for all, better pay for teachers, women's right to chose what to do with their bodies, and gun control to end school shootings, a theme she is too familiar with. Who can get used to active shooter drills at school????

The day was exhausting. The trembling voice of a woman washed over the nation. She dove deep into her darkness of abuse in front of millions. Then, angry voices of men overrode her testimony in seemingly endless rounds of punches to the gut. Men decided that in this "she said-he said" deposition his voice will count.

In this campaign office the name of the man is present in a hashtag-sign demanding not to let him advance to one of the highest offices in this country.

The evening sun enters through the glass front and softens the light coming from fluorescent tubes. Rush hour traffic passing by is the backdrop to what Cat is going to say. A candy wrapper, purple hearts on pink foil, is a reminder of the support she is surrounded by. The tightness in her shoulders melts. The worry about embarrassment lifts. An inner warrior pose takes over her body and mind.

"Welcome, I am so glad you are all here," she says. "I am too young to vote, but I am here to do what I can to change the country. My fun fact: I am a national champion equestrian. Let's get to work."

In this moment, I am encouraged. I feel like I can find the braveness to step up. I can stand firmly even on wobbly grounds. I can use the power of my voice. I can speak my truth. I can fight in my own ways for a world where kindness and compassion are more important than power and money. And where people listen to each other.

please send your comments to This email address is being protected from spambots. You need JavaScript enabled to view it.