Sotheby's to auction the Macklowe Collection 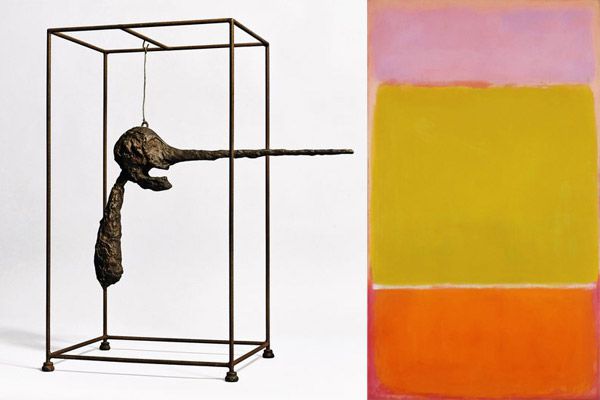 Sotheby's to auction the Macklowe Collection
On November 15, 2021, Sotheby's will auction the first part of the Macklowe Collection, which includes masterpieces of Post-War and Contemporary Art, valued at more than $600 million.
Alberto Giacometti - Le Nez - 1947Mark Rothko - No.7 - 1951
Source: Sotheby's. Images: Alberto Giacometti, "Le Nez". Bronze, conceived in 1947 and cast in 1964 :: Mark Rothko, "No. 7," 1951. Oil on canvas.
Considered by most specialists as one of the finest private art collections in the world, the Macklowe Collection consists of 65 works, 34 of which will go on sale next November, while the rest will be auctioned in May 2022. Among the works that Sotheby's has announced for the November auction are some masterpieces that are set to fetch very respectable prices, aspiring even to break the auction records for their artists.
"Le Nez", by Alberto Giacometti, is one of the artist's most important sculptures, and those are big words if we take into account that three works by Giacometti have already surpassed the $100 million barrier. As proof of its importance, Sotheby's (which by the way has not published a pre-sale estimate for the work) notes that "Le Nez" was selected as the cover for the catalog of the Giacometti retrospective at the Solomon R. Guggenheim Museum in 2018.
No pre-sale estimate has been published for Mark Rothko's "No. 7" either, but the painting has everything to challenge Rohko's auction record ($86.8 million at Christie's 2012, if we don't take into account the private sales of a painting from the Bunny Mellon collection and a dubious acquisition by Dmitri Rybolovlev). The work was painted in 1951 -a most important year in Rothko's career-, it comes from a very respected collection, and last but not least, it is certainly a very attractive Rothko, whose color scheme is reminiscent of the "White Center" that broke all price records for the artist almost 15 years ago.
The vivid colors of the Rothko contrast with the gray tones of "Nine Marilyns," a classic Andy Warhol for which Sotheby's expects to raise between $40 million and $60 million. The same pre-sale estimate has been assigned to Cy Twombly's "Untitled," a work with clear oriental inspiration. "Seestück," a photorealist composition painted by Gerhard Richter in 1975 has an estimate of between $25 million and $35 million.
Along with the Cox Collection of Impressionist art that Christie's will also auction in November, the sale of the Macklowe Collection will be a good moment to take the pulse of the art market at a time when the crisis caused by the pandemic seems to be beginning to ease.