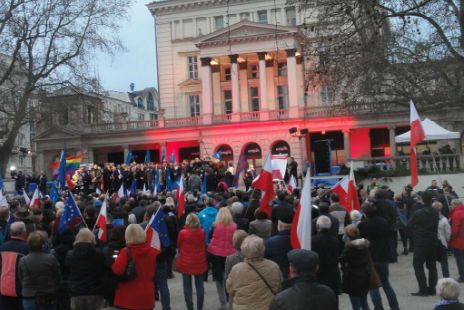 On the eve of the festivities in Poznan the opposition Nowoscesna party organized a demonstration. According to party leader Anna Biniszewska the current government has turned patriotism into nationalism. (Photo: Hendro Munsterman)

On April 14th one-thousand-and-fifty-years-ago Poland's first king, King Mieszko I, was baptized a Christian. The event marks the day when the entire nation became Catholic.

"Church and State can finally celebrate the Christianization of Poland together," he proudly declares.

Then he displays several archive pictures from the 1966 celebrations marking the 1000th anniversary of Poland becoming a Christian country.

The photos show the people of Poznan meekly listening to the speech of the Communist president Edward Ochab. Then images of the procession to Ostrów Tumski, the cathedral island in the Warta River. There, "in our own little Vatican", Poland's Catholic Primate, Cardinal Stefan Wyszy?ski, gives that speech that everyone applauded.

The pictures capture the time when Church and State were severely opposed to one another.

Many believe that the Catholic Church in Poland is too close to the current right-wing nationalist government.

"The president of the bishops' conference, Stanislaw Gadecki, the actual Archbishop of Poznan, is moderate. He talks to everybody," says Fr Rakowski who serves together with five other priests in a parish on the west side of Poznan where many young people live. He and his parish support two families of refugees from Afghanistan and Syria.

But especially in the Eastern part of Poland several bishops are less moderate and it is not unusual to hear priests in the pulpit urge people to vote for Jaros?aw Kaczy?ski's ruling Law and Justice Party (PiS).

Moreover, the influence of the conservative Catholic radio station Radio Marija cannot be underestimated. Although the Vatican has openly criticized the station for its political character and anti-Jewish attitudes, the Polish bishops are divided over it. Advertising for the station can be found in many Polish churches.

Debora and Mateusz, two students in Poznan very involved in Neocatechumenal Way, confirm the influence of the radio station. The young couple says both their grandmothers are loyal listeners, but are too uncritical.

The youngsters are uncomfortable with the current political situation.

"I myself voted PiS," says Mateusz.

"They are currently the closest to what I think is good for Poland, though I do not agree with everything the government does," he says.

The government is under fire at present, especially for its plans to restrict the freedom of both the Constitutional Court and the state broadcaster. Opposition parties say democracy is at risk.

On the eve of the festivities in Poznan, as Polish and Vatican flags were draped all over town, the liberal and pro-European opposition party Nowoscesna organized a 'patriotic demonstration'.

According to Anna Biniszewska, the party's founder and leader, the current government has turned patriotism into nationalism.

"They have taken from us the real patriotism," she says between the Polish and EU flags filling a part of the symbolic Square of Liberty.

Kaczy?ski and his followers believe "the Polish flag is more beautiful than all other flags, the Polish national anthem better than any other, the Catholic Church and doctrine inextricably linked to the Polish identity and refugees bring only problems and diseases with them."

The latest government plans to transform the strict abortion law into a complete ban are for many Poles an eyesore. The wives of three former Polish presidents (Walesa, Kwasniewski and Momorowska) have even protested publicly.

The current law allows abortion only in three cases - when the mother is raped, when her life is in danger or when the unborn child is so severely ill that it will not survive. The 1993 law is a compromise between the church and the then government.

"I'm against abortion, but the abolition of this law is just symbolic politics," says Debora.

Indeed, there are currently more than 120,000 abortions performed each year, of which only 1,000 are done legally.

"And Poles are stubborn. They don't like it when the government tells them what to think and to do," adds Debora's boyfriend, Mateusz.

The site of where King Mieszko was baptized on April 14, 966 is unknown. But according to historians it might either be Gniezno or Poznan. Therefore, the three days of celebrations take place in both cities.

The full Polish parliament also came together at a special meeting outside the capital Warsaw, along with President Andrzej Duda and all the country's entire Catholic episcopate.

According to the bishops the historic baptism gave Poland access to "the world of Latin culture and a place within the community of Christian nations." And it brought Poland into Europe.

In Poznan, church and state organized together - as a reminder of 1966 - a liturgical procession to the cathedral, where King Mieszko is buried. Pope Francis' Secretary of State, Cardinal Pietro Parolin, presided at a large Mass with all the Polish bishops under tight security.

However, one bishop was not present.

The Vatican stepped in at the last minute and blocked Archbishop Juliusz Paetz, the disgraced former head of the Archdiocese of Poznan, from attending. Pope John Paul II had deposed Paetz in 2002 for sexually abusing seminarians and young priests and for organizing gay parties at the episcopal palace.

"But he still has many friends in the Vatican, where he worked for several popes," says Fr Rakowski.

During his time at the Vatican he also worked as a spy for the communist regime. And he still lives in the town where he was born and grew up.

In 2009, Pope Benedict XVI publicly congratulated him Archbishop Paetz for his 50th anniversary of priestly ordination and thanked him for his "fruitful and beneficial work... in Poland and abroad."

But the papal nuncio has reaffirmed that he is to continue his life of repentance and prayer - and that he should not even think of participating at World Youth Day festivities next July in Krakow, which will be led by the Pope Francis.

The fact that the current pope sent Cardinal Parolin to the recent anniversary celebrations is a sign that the he realizes the situation in Poland is difficult. The cardinal is not only an experienced diplomat and former nuncio, but he is also Francis' right-hand man.

Polish officials have scheduled another celebration of the Christianization of its country. It is to be held in July during the papal visit.

Will Francis use the opportunity to teach the Polish Church and Government what it really means to be a Christian nation - especially by honoring democratic rights and welcoming refugees? That's the hope of some Poles. It is the fear of many others.