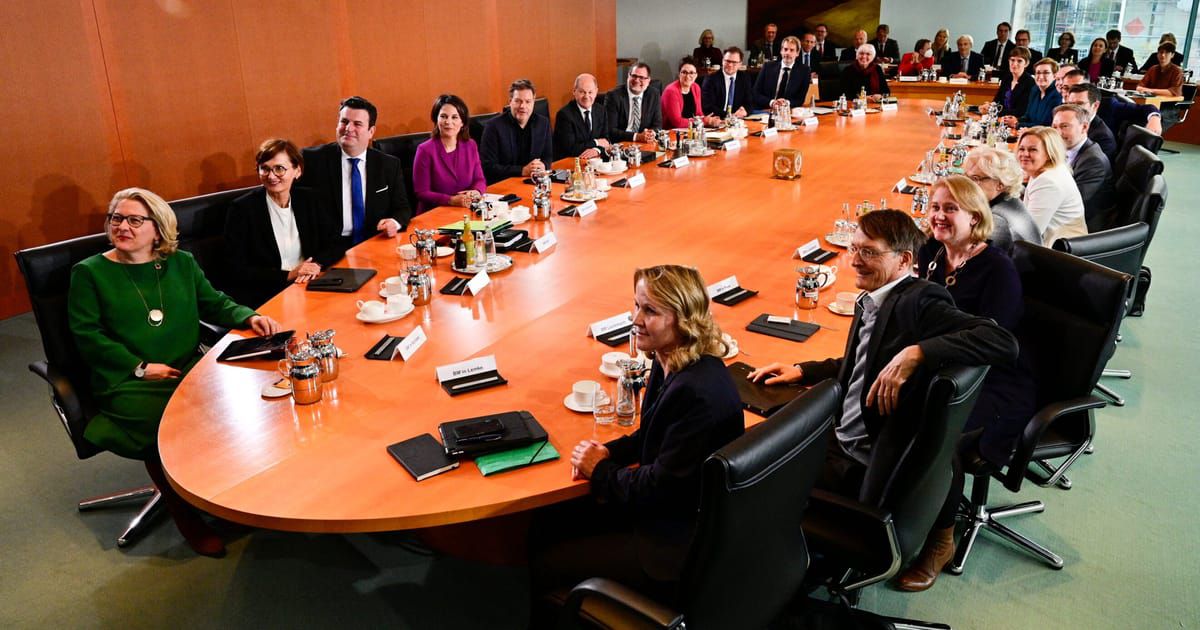 BERLIN - A historic coalition set out ambitious goals for reforming Germany. Then the war hit.

The storied tradition of consensus-building in the German government reached a new level over the past year, as the EU's most-populous country struggled to lead Europe after Angela Merkel's tenure of 16 years.

One year ago, Olaf Scholz was elected as the ninth German chancellor since World War II, leading an unprecedented "traffic-light coalition" of the Social Democratic Party (SPD), the Greens and the Free Democratic Party (FDP) - named after the three parties' signature colors of red, green and yellow.

Barely three months into the new term, Russia invaded Ukraine, upending Berlin and forcing a rapid rethink of foreign and defense policy while also scrambling to escape from the clutches of years of intensified energy dependence on Moscow.

This extraordinary situation forced all coalition parties to take actions that had, until recently, been unthinkable for each: The center-left SPD was forced to acknowledge that it "failed" with its years-long appeasement policy toward Russia; the environmentalist Greens accepted burning more coal and even extending nuclear energy as alternatives to Russian gas; and the free-market-oriented FDP had to grudgingly agree to taking on record debt to finance the military, and provide energy subsidies to citizens and companies.

The war-wary SPD and peacenik Greens also had to overcome qualms about supplying Ukraine with weapons, despite a long-fostered policy of not delivering arms to "crisis zones."

Clearly, not every politician in the German government rose to those challenges. And there are also some members of the Cabinet - such as the development, family, or education ministers - who have hardly been visible at all over the past year.

Thus, POLITICO is grading the performance of the government members who have played the most important roles in shaping German politics, both at home and abroad:

Scholz initially seemed to fail to realize the danger emanating from Moscow: While he dedicated the start of his term to (ultimately fruitless) attempts to achieve a diplomatic solution with Russian President Vladimir Putin, he also defended the controversial Nord Stream 2 pipeline until nearly the very last moment.

Yet after Russia's invasion of Ukraine, Scholz did an about-face and initiated the Zeitenwende, an epochal shift in German foreign and security policy that, among other things, pledged 2 percent of German economic output for military buildup. He nonetheless wobbled in the coming months, hesitating to supply Ukraine with heavier weapons. Ultimately, German deliveries of anti-aircraft tanks, howitzers and multiple rocket launchers only happened amid criticism from allies and massive pressure from both domestic and international fronts.

Strikingly, Scholz largely failed to get ahead of the curve in taking the initiative on bold decisions to support Ukraine, as well as failing to communicate his policies well.

But the fact that he managed to steer his ruling coalition, with very different parties, more or less well through an unprecedented crisis - while also advancing his own political priorities such as social policy - may not be underrated.

On the European level, Scholz caused a major backlash by neglecting to consult with partners (or even just communicate with them) over an enormous €200 billion energy price relief package that some fear will distort the European market. Scholz also faced off with French President Emmanuel Macron in a remarkable public clash.

Defining moment: Scholz became the first chancellor in over 60 years to use his executive policy-making powerto issue a word of command in October, forcing through an extension of the lifetime of Germany's nuclear power plants until spring 2023 - which had previously been impossible due to resistance from the Greens.

Habeck started his mandate by laying out bold plans to boost the share of renewables in Germany's energy mix, a task grossly neglected by the previous government. Yet soon enough, Russia's war against Ukraine and the growing energy crisis forces him toward Realpolitik: The Green politician had to travel to Qatar to lobby for gas reserves, hastily initiate the construction of German liquefied natural gas terminals and fire up coal power plants as Moscow gradually shut down energy transfers to Germany.

As a gifted communicator, Habeck managed to explain these difficult choices to citizens well- but his popularity ratings dropped nonetheless after a controversial gas price surcharge sparked a backlash. The minister also, understandably, struggled to accept the extension of the lifetime for German nuclear power plants.

On the economic front, Habeck managed to overcome his party's reluctance toward free-trade deals - and just a week ago, the German parliament voted to support ratifying an EU agreement with Canada. Habeck also played a major role in initiating a shift in German industrial policy to counter aggressive subsidies by the U.S. and China.

Defining moment: By November, Habeck could announce the good news that Germany's gas storage capacity was filled to 100 percent, meaning the country is safe to get through this winter despite Russia's energy blackmail.

Baerbock may have botched her election campaign to become chancellor due to her lack of experience, but in her alternative role as foreign minister, she performed strongly from the start: In January, she emerged as the clear winner from a tense press conference with her Russian counterpart Sergey Lavrov (who is usually feared for his experience and ability to humiliate foreign politicians).

Throughout the spring, she pushed Scholz to send heavy weaponry to Ukraine. More recently, she's also urged the chancellor to take a tougher line toward Beijing, most notably by drafting a new China policy. Baerbock also played a key role during climate negotiations at the COP27 climate conference in Egypt.

Baerbock is holding out hopes that a successful tenure as foreign minister will offer her another shot to become the Greens' chancellor candidate in 2025. This sets her on a collision course with Habeck, who's already gearing up to challenge Scholz in the next general election.

Defining moment: Baerbock was the only chancellor candidate during the 2021 election campaign who warned about risks around Russia and the Nord Stream 2 pipeline. She reiterated that point during a speech to German ambassadors in Berlin in September: "In reality, we never got cheap gas from Russia ... We paid double and triple for every cubic meter of Russian gas with our national security," the foreign minister said.

Lindner started his job with the commitment to reinstate Germany's constitutionally enshrined "debt brake," which had been suspended since 2020 due to the coronavirus pandemic. But instead, the war forced the German government - and him as finance minister - to take on new record debt, including a €100 billion special fund to upgrade Germany's armed forces. And soon, it became clear that even more debt would be needed to manage the economic fallout of the energy crisis.

On paper, Lindner still managed to reach his goal of reinstating the debt brake next year, as he outsourced various additional costs into special funds, or shadow budgets, that amass to about €360 billion of fresh debt - that's a whopping 72 percent of this year's regular budget of €496 billion. The FDP leader argues that's OK because these are extraordinary costs that could be separated from a normal, non-wartime budget ... although Germany's audit court disagrees.

The next challenge for Lindner involves growing calls in Europe for taking on further new debt to finance business subsidies, which not only France but also Habeck see as necessary to preserve European industries in global competition with the U.S. and China. Given that the FDP already suffered a series of beatings in regional elections across Germany this year, it will be difficult for him to make any further concessions on additional crisis spending. To be fair: These are particularly tough times to be a German finance minister.

Defining moment: In the spring, Lindner vowed to preserve the combustion engine - and with it, a lot of the traditional manufacturing in Germany's car industry - by pushing for an exemption for synthetic fuels under the EU's green rules. However, in the ensuing legislative battle in Brussels, he was defeated on this front.

After a year in office, Lambrecht is increasingly under attack. Germany's armed forces are in a bad state, as ammunition is running low, purchases are at risk of being delayed and defense spending promises are being missed. It became clear earlier this week that the promise to invest at least 2 percent of Berlin's economic output in defense will not be reached this year and even beyond.

Lambrecht, who has little prior military knowledge and lacks respect among many German soldiers, seems increasingly to be the wrong person for Scholz's Zeitenwende. Her critics say she lacks the sensitivity for the magnitude of the task, as she was unable to present a vision for the Bundeswehr, Germany's armed forces, despite a record-breaking €100 billion modernization fund. Instead, Lambrecht stood out for clumsy moves like taking her son on a helicopter flight as part of a personal holiday.

Defining moment: Lambrecht celebrated out of proportion a delivery of 5,000 helmets to Ukraine earlier this year as "a clear signal" of support for Kyiv. Overall, military aid to Ukraine seemed too slow. Lambrecht repeatedly stressed that the Bundeswehr could no longer deliver, only to correct herself a few days later.

Germany's infrastructure remains in a state of disrepair and digitization is progressing only haltingly - so Wissing inherited countless problems. He has so far, however, done little to solve them. Only the €9 ticket, born out of necessity - and its successor, the €49 ticket - have saved Wissing, who was at least able to send a signal on making public transport more accessible. Meanwhile, the expansion of the country's electric vehicle charging station network is behind schedule, and the transport sector still emits far too much carbon dioxide.

The government had also pledged to advance digitization. What remains of this are largely promises; a digital strategy was adopted across all ministries, but implementation stalled. One reason was bureaucracy: Wissing's biggest limitation is that, despite being the digital minister, he has limited control over German digital policy, as major projects are not his sole responsibility.

Defining moment: According to Lindner, Wissing personally convinced him to set up the €49 ticket. Its predecessor, with which public transportation could be used nationwide for €9 a month, was an idea of Wissing's to reform fare structures to make trains and buses more attractive.

During the election campaign, the SPD promoted itself with the slogan "more social policy for you." In this area, Scholz's strong man in the background has been Heil, who implemented some of the party's key election promises. Despite resistance from the opposition, Heil pushed through the so-called citizen's income, which replaced the former Hartz IV welfare system. With its increased payouts, this represented a cardinal commitment of the Social Democrats and was one of Germany's most significant social reforms in recent history.

Furthermore, Heil oversaw increasing the minimum wage to €12 an hour and introduced the government's first pension reforms. It's also notable how he managed to insert himself into debates on the energy crisis and inflation relief packages that the government brought forward. And shortly before the Christmas season, the Cabinet approved key points for reforming skilled labor immigration.

Defining moment: After the opposition blocked the citizen's income in Germany's upper legislative chamber, the Bundesrat, Heil pushed for a quick conflict-resolution process so that the reforms could swiftly take effect. Although he was forced to make compromises on some conditions, he still achieved his goal, as new rules will apply starting January 1.