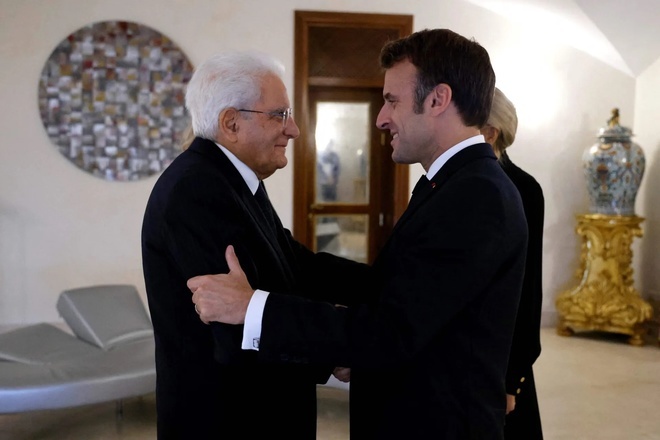 ROME - Giorgia Meloni's new Italian government has only been in power a few weeks, and already the grown-ups have had to step in.

As a dispute between Italy and France over taking in migrants escalated, President Sergio Mattarella, Italy's head of state, personally intervened, holding a phone call with President Emmanuel Macron on Monday morning.

The Italian and French presidents' offices said in a joint statement that the two leaders agreed on the "great importance" of relations between the two countries and on the need for full cooperation, both in the bilateral sphere and within the European Union.

Italy's president has a largely ceremonial role, with constitutional powers to step in when a government collapses. However, Mattarella, who has a good relationship with Macron and helped deliver a treaty of cooperation between Italy and France last year, took the unusual step of publicly stepping in to smooth over the row between Meloni, the prime minister, and Macron's government.

Stefano Ceccanti, a constitutional lawyer and senior figure in the Democratic party, said that, as Italian governments are often short-lived, it is not uncommon for presidents, who sit for seven years and therefore have longer to build up relationships, to help out with international affairs. "What is unusual is for this call to be made public, and immediately," he said. "By making it public this time, Mattarella is helping the government, by showing that the problem has been resolved, so as to turn the incident into a footnote."

Meloni said the spat with France was the result of "a misunderstanding" and called the French stance "aggressive."

Last week Paris froze plans to take in 3,500 refugees as part of the EU's migrant-relocation mechanism, and announced border reinforcements, after Italy redirected a migrant boat to dock in Toulon.

Italy found itself increasingly isolated among major EU economies, after Spain and Germany sided with France over the weekend. The German ambassador to Rome tweeted that the NGO vessels that have rescued hundreds of migrants at sea "deserve our recognition and support." Officials in Brussels have called an extraordinary meeting of home affairs ministers to try to resolve the tensions.

Meloni has a long track record of anti-French positions and has said that she will demand Italian interests are met in the EU. She met Macron in Rome two weeks ago, and the two pledged to cooperate, but officials expected clashes over issues such as migration.

Raffaele Marchetti, professor of international relations at Luiss University in Rome, said Mattarella's intervention was "fairly unusual," but as the president facilitated the treaty with France, he may have felt some duty to help out.

Europe has not resolved the migration issue and both sides are under pressure on that front domestically - Macron from the far right and Meloni from her coalition partner Matteo Salvini, leader of the League - said Marchetti. "It's clear that with the new government the European dynamic will require some adjustments ... I expect that migration will continue to be an issue."