Death toll from European floods climbs to more than 150 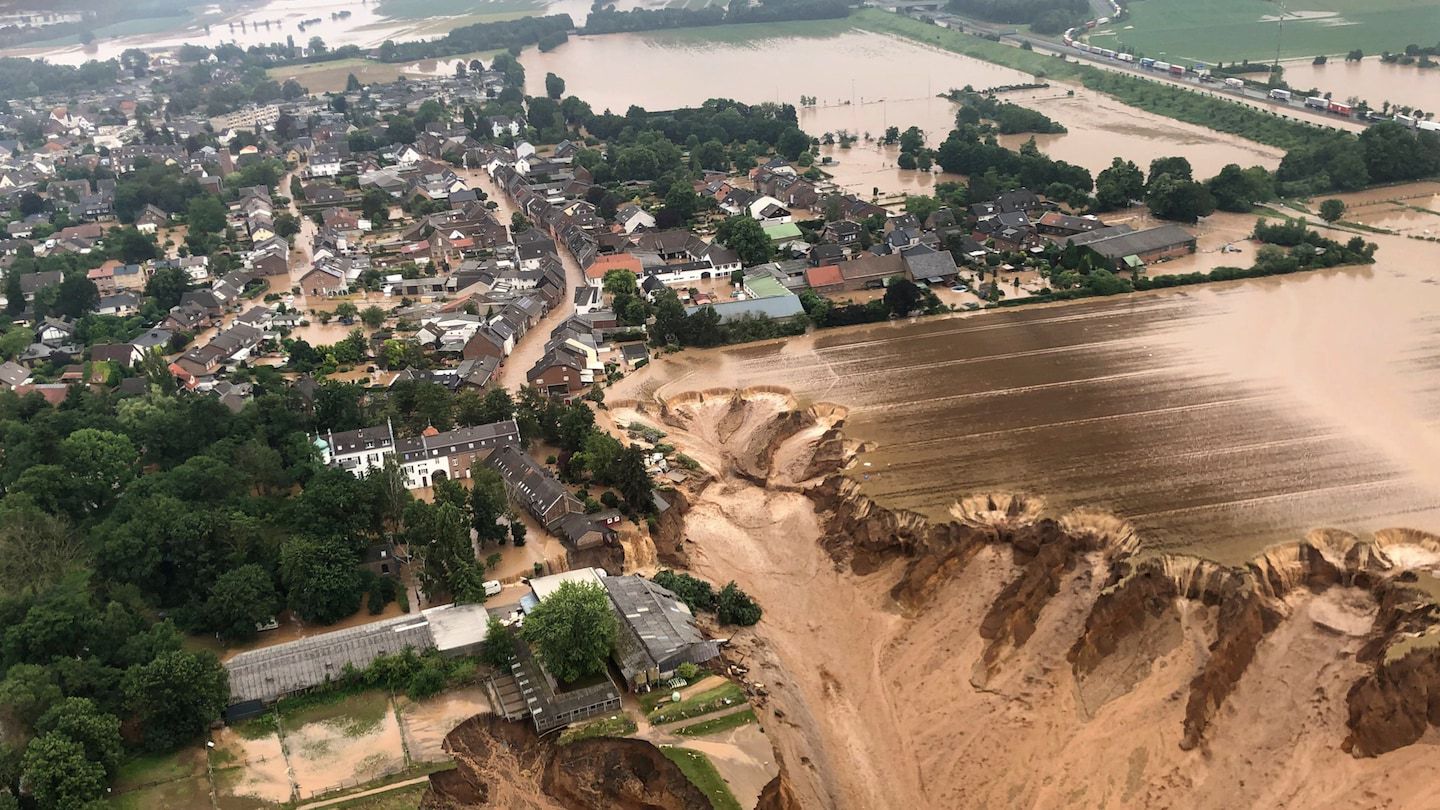 More than 100 people have died and hundreds more are missing on July 15 in western Europe after unseasonal heavy rains brought severe flooding to the region. (John Farrell/The Washington Post)

BERLIN - German military units helped clear roads Saturday and open more rescue routes into areas devastated by massive floods that claimed more than 150 lives in Germany and Belgium and raised alarms that the disaster was a glimpse into growing threats from climate change.

But even as the waters receded - and crews begin to shore up flood-damaged buildings and roads - the death count continued to grow.

German police said that more than 130 people died in flooding in western parts of the country after torrential rains that began Wednesday triggered a catastrophe that unfolded at astonishing speed: rivers pouring over their banks, bridges buckling and hillsides giving way in a rush of mud and debris. Belgium's national crisis center said at least 24 people were dead.

"A lot of people have lost everything they spent their lives building up - their possessions, their home, the roof over their heads," German President Frank-Walter Steinmeier said during a visit to the flood-battered town of Erftstadt near Cologne. "It may only be possible to clear up in weeks how much damage needs to be compensated."

Photographs and aerial video showed scenes of total - and sudden - devastation in the heart of Europe: a train stranded at a swamped station, vehicles abandoned on waterlogged roadways, survivors floating down a city street on rubber boats.

A television interview with a Belgian mayor was interrupted when a house in the background started to crumble. Bricks and belongings poured from the home into the flooded street - and two people tried to escape through the roof.

How weather patterns joined to bring deadly flooding to Europe

"We are still waiting for a definitive toll, but it could be that this flood becomes the most catastrophic our country has ever known," Belgian Prime Minister Alexander De Croo said Friday.

The storm - a major low-pressure system that stretched from Germany to France - brought a deluge Thursday that quickly swelled rivers, damaged bridges and roads, and left many people scrambling to rooftops or onto fallen trees.

Europe floods: Before and after images reveal the extent of the destruction

More than 1,000 rescue operations have been carried out in the hardest-hit areas since early Thursday, authorities said. In some places, helicopters were the only way to reach stranded people.

By midday Friday, the death toll in Germany had climbed to more than 100, according to German media reports citing officials. At least 50 people died in the southwestern state of Rhineland-Palatinate, and 43 died in neighboring North Rhine-Westphalia, security officials said.

German Chancellor Angela Merkel, fresh off a trip to Washington, met via video conference with a crisis team Friday. She was briefed on rescue efforts and pledged government support. Belgian officials also said Tuesday will be declared a day of national mourning.

In the hardest-hit parts of Germany, two months' worth of rain fell in 24 hours, according to the Deutscher Wetterdienst, Germany's meteorological agency, causing a 1-in-100-year deluge.

"We're not at the point today where we can say the situation is getting better. The sorrow is still rising," she said.

Dreyer said that work to tackle the issue of climate change would continue and stressed the importance of protecting future generations from such turmoil.

Scenes of the devastation left behind by floods in Europe

Many saw the flooding as a vivid warning of what's to come as climate change reshapes weather patterns.

Armin Laschet, the premier of North Rhine-Westphalia and a candidate to succeed Merkel in September's elections, called on officials to take the issue more seriously.

"We need to continue Germany's path toward climate neutrality even faster," he said. "In these difficult hours, we must overcome all party and state boundaries."

Ernst Rauch, the chief climate and geoscientist for Munich Re, a major German insurer, warned of more such catastrophes to come.

"There are clear indications that part of the growing damage cannot be explained solely by socio-economic factors but is due to climate change," he wrote in a statement posted to Twitter.

"We have to assume that these damages will increase in frequency and intensity."

In the Netherlands, near the city of Maastricht, a dike of the Juliana Canal collapsed Friday, a local spokesman in charge of the security said. Residents were told to evacuate amid fears the breach in the dike could widen.

In other places across the flood zone, survivors took stock of what was lost and traded stories of the fearsome speed and power of the rushing waters.

"We already experienced floods, but nothing like this. We just bought this house eight months ago and it was meant to be the unsinkable house of the village," said Laurence Willquet, 47, who lives in the Belgian village of Hony, around 10 miles from Liège and near the Ourthe river.

"Everything is ruined, we lost everything," she said, adding that she fled to stay with a friend whose house was also flooded. Willquet wasrescued Thursday, jumping to a boat from the first floor of the house.

Luxembourg and Switzerland were also hit by torrential rain, and warnings were issued in more than a dozen regions of France. Earlier this week, Britain was struck by flash floods that submerged parts of London in deep waters and turned residential roads into flowing rivers.

Hassan reported from London. Luisa Beck in Berlin, Gabriel Rinaldi in Berlin, Quentin Ariès in Brussels and Amar Nadhir in Istanbul contributed to this report.
Scenes from Europe's deadly floods
Yet another major heat wave is set to roast the western U.S. and Canada by the weekend
As extreme weather intensifies, a growing need for private-sector engagement in government
Today's Headlines The most important news stories of the day, curated by Post editors and delivered every morning.
Zum Original
Original anzeigen Erstellt am 19.07.2021
Bearbeitet am 19.07.2021
Quelle
https://www.washingtonpost.com/worl...
Lizenz