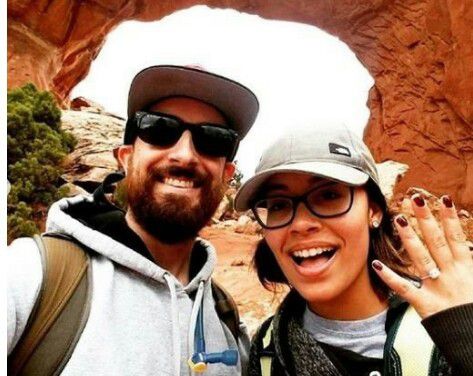 A 30 year old man Josh Byrne, has been tragically killed in a freak flash flood while on his honeymoon in Costa Rica just five days after their wedding last week.

Josh and Bianca Byrne, from Massachusetts, USA, got married Oct. 6. They were on their honeymoon in Costa Rice when their vehicle veered off a bridge and submerged in the river last Thursday, according to the Boston Herald.

They were able to get themselves out of the vehicle and climb onto the car's roof and then decided to swim to shore. Bianca made it to shore, but Josh, 30, was swept away by flash floods.

Josh's father and brother flew to Costa Rica to help search for their loved one. Searchers then discovered Josh's body on Saturday.

'It is with heavy hearts that we have concluded our search for Josh,' a statement from the family said.

According to their friend, Michael Ciprari Josh and Bianca Byrne, were on their honeymoon that was supposed to be "the best part of their lives" until their vehicle veered off a bridge and submerged in the river.

The two were able to extricate themselves from the vehicle and climb on the car's roof. Both decided to swim ashore. As Bianca swam, she looked behind, Josh was gone.

The couple met through Instagram in the fall of 2015, said Melissa Byrne, who is married to Josh's brother, Patrick.

"They both had dogs and they followed each other on Instagram," she said. "Bianca reached out because they wanted to meet their dogs. A doggy play date was scheduled and Josh was glowing, he was excited. I knew that day they were going to get married."

Josh Byrne proposed to Bianca a year ago this week. At the wedding, Melissa Byrne said she remembered "telling Bianca I was excited to have another sister. I gave Josh a hug and told him I was proud of him.

When Josh's brother, Patrick Byrne, was given the heartaching news that Josh was missing, he wondered, "Am I going to be the only child? What does this mean for me?"

Ciprari, owner of SJC Custom Drums, where Josh Byrne worked for the past 10 years, said "We're a small company and we have gone through a lot and Josh stuck by my side. We all pitched in together and gave him a G-Shock watch before his wedding. We really miss him."

When Josh's brother, Patrick Byrne, was given the heartaching news that Josh was missing, he wondered, "Am I going to be the only child? What does this mean for me?"

"Patrick is a firefighter and he feels the world is on his shoulders," Melissa Byrne said of her husband. "Normally, he wants to be involved but this time, he knew it was his own."

The family created a GoFundMe account to cover costs for the logistics of proper recovery and services.

'Josh holds a special place in all of our hearts and will always be remembered for his helpful and caring demeanor, his ability to make friends in any setting, and his love for his wife, Bianca,' the family said.