Muhammad Amin Karim: The role of HIG in Afghanistan 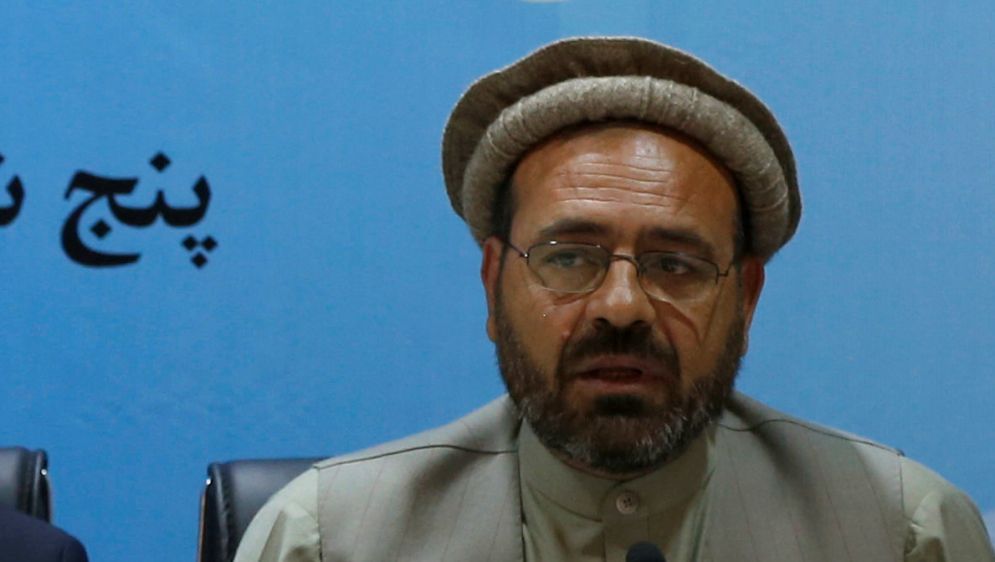 'Our goal was to work for freedom, independence and justice using all means, any means ...' says Mohammad Amin Karim [Omar Sobhani/Reuters]

On September 29, the Afghan government signed a peace agreement with Gulbuddin Hekmatyar, the leader of the Hezb-i-Islami party, also known as HIG.

Hekmatyar, in hiding since 1997, has been on the US state department's list of designated terrorists since 2003. The agreement allows for his return, calls for the removal of sanctions against him and pardons him of the crimes he has been accused of committing.

The deal has met with a mixed reaction from Afghans, with opponents and human rights activists criticising it for the impunity it grants him, while some see it as a necessary step towards peace.

Hekmatyar was one of the most influential leaders in the fight against the Soviet forces in the 1980s. When the Soviet-backed government in Kabul fell in 1992, Hekmatyar locked horns with important leaders of the resistance. After briefly accepting the position of prime minister in the interim government, he resorted to firing countless rockets at civilian neighbourhoods in Kabul, earning him nicknames such as "Rocketyar" and "the Butcher of Kabul".

When the Taliban took over in 1996, Hekmatyar was forced to flee the capital, while some of his followers joined the Taliban.

After the US invasion of Afghanistan in 2001, Hekmatyar declared war against coalition forces and allegedly formed alliances with the Taliban and al-Qaeda, although he has denied this.

HIG has taken responsibility for a number of attacks in Afghanistan and is suspected to be behind an assassination attempt on former President Hamid Karzai.

While a faction broke from Hekmatyar's HIG and joined the government after 2001, questions remain about how the peace deal will affect politics in Afghanistan.

As Kabul prepares for the return of Hekmatyar, Al Jazeera spoke to Muhammad Amin Karim, Hekmatyar's representative and chief negotiator of the HIG delegation.

This interview has been edited for clarity and length. The views expressed in this interview do not necessarily reflect Al Jazeera's editorial policy.

Al Jazeera: What motivated HIG to negotiate a peace deal with the Afghan government?

Mohammad Amin Karim: The relationship between Afghans and the international community was a lose-lose situation. Thousands of people were killed by the American invasion. The invaders repeated slogans like the "fight against terrorism", build "good governance" and "bring democracy".

But if you look at what the US actually did, the result was negative. So at that time we proposed that there should be a win-win situation for the Afghan people and the international community based on the interests of Afghans and the legitimate goals of the US and its allies, which is to fight against terrorism.

Only Afghans can do it effectively.

If Afghans in the villages decide that there shouldn't be any groups attacking other countries, they are the only ones who can do it.

If you want to bring democracy and an elected government, you can't do it with Humvees, tanks and drones. You should work with the people. That was the beginning of these negotiations.

First, in 2010, I brought the delegation of HIG to propose this solution to the government. But unfortunately at that time there was no real wish for peace.

Then in 2014, Barack Obama announced that by the end of 2016 there would be no more American combatant soldiers in Afghanistan. That was the beginning of the new process of negotiations which I led. And after two years of hard discussions and negotiations, finally, we achieved this goal.

Al Jazeera: Where is Hekmatyar now? How closely was he involved in these negotiations?

Karim: He is in Afghanistan, like he has always been.

He will return to Kabul as soon as possible, once all the sanctions are lifted and all the technical problems are solved.

He was involved in the negotiations as closely as it was possible.

Al Jazeera: In the 1990s, Hekmatyar was offered the position of prime minister, but he ended up leaving the government very quickly. Why has he accepted this peace agreement now without being offered a position in the government?

Karim: HIG was founded almost 50 years ago, and it has goals and objectives: the independence of the country, a lawful Islamic government and justice.

For us, the most important question is how to achieve our goals. That's why sometimes we accept to take on this responsibility and sometimes we don't.

Now, we are facing three options: first, how to participate actively and not be accused of the problems that this regime has.

The second option is to be a symbolic presence - one, two ministers - which is not an option for us; we will not accept this.

And the third one, which is very seriously under our study, is to be inside Afghanistan and outside the regime as an independent political party in order to participate in the next elections in the hope that it will be a little bit more transparent. And that's the way we consider the only legitimate means to be in power and to share power.

Al Jazeera: What was the main reason the peace agreements in the 1990s did not work out? How can it be ensured that Hekmatyar will not abandon the agreement with the government again?

Karim: Sir Hekmatyar will not participate in the government anyway. It's not the purpose.

He will definitely not run for president because this is an opportunity to be something higher than a member of this government.

One of the key problems in these 30 years was that HIG has always asked that the only way to be in power should be through elections. That's the only legitimate way.

Up until very recently, most of the mujahideen parties and others would never accept this principle, including Mr [Burhanuddin] Rabbani, who agreed that after four months of his presidency we should have elections in Afghanistan and he didn't do it.

That was the beginning of problems during the civil war. He wanted to have exclusive power without any legitimacy from the people. Now this government accepts this, so why should we refuse it?

That's what we asked for.

Al Jazeera: Many people who were in Kabul during the civil war remember Hekmatyar for the rocket attacks that killed thousands of people. How do you think he will be welcomed back into the city?

Karim: Right after the civil war, Mr Hekmatyar came to Kabul. He was the most welcomed man in this country.

And now, every day since the signing of this contract, we have had meetings all over the country. More than 15,000 people attended in Herat, and in Jalalabad more than 10,000 people. The people you're talking about are just a circle of microcosm of Kabul.

More than 99 percent of Afghan people support this peace deal. The majority of Kabul's people would vote for him.

Hezb-i-Islami was already in this parliament and its parliamentary group is the most important one today.

Al Jazeera: Regarding the division between Hekmatyar's HIG and Abdul Hadi Arghandiwal's Hezb-i-Islami Afghanistan [HIA], which has already been part of the government, was there any contact between these two parties? Will Arghandiwal's party join Hekmatyar when he comes back?

Karim: Yesterday, Mr Arghandiwal was here in this room with me. All the leaders of HIG are with me.

There's no disconnect, we are working together.

Hezb-i-Islami was a party of millions of people. A number of youngsters decided to join the resistance in the mountains. What were we supposed to do with all the hundreds of thousands of people? It was natural that they should work with the government.

Our goal was to work for freedom, independence and justice using all means, any means, including working inside the government.

Al Jazeera: And was there contact between Hekmatyar and Arghandiwal?

Al Jazeera: Hekmatyar's HIG has claimed responsibility for a number of suicide attacks in Afghanistan. How does it work when you have your people in the government but you are attacking the government at the same time?

Karim: There is only one HIG, so please don't use [any distinctions] because there is no sense in it.

We never attacked the government of Afghanistan, ever.

From the beginning we said we are only targeting foreign troops in Afghanistan.

Maybe sometimes, there was some fighting between government forces and HIG, but we very clearly stated from the beginning that it's not a war against either Afghans or the Afghan army.

But yes, we fought against foreign troops. And we claimed this very proudly.

Al Jazeera: There was an attack in one of the supermarkets in Kabul which was claimed by HIG. You have said that you thought attacks like these were legitimate. Why?

Karim: This attack could be an operation claimed by HIG, and as far as I know - because I'm a political man - they were targeting foreign troops and soldiers.

The political wing was very clearly working on the policy side, and it has no connection with the military wing. That was not their responsibility. They renounced military action.

Al Jazeera: Is there anything that might make HIG want to take up arms again? For example, if the foreign troops do not leave soon.

Karim: We are against this presence and we will fight peacefully against it.

As long as we are free to do that, there's no reason.

All surveys show that the majority of Afghans want foreign troops to withdraw from Afghanistan. As long as we are able to fight peacefully and legally against this presence, there's no reason to go anywhere. This is the best way for us.

We did it after very deep reflection, after 10 years of reflection.

Al Jazeera: HIG has been seen as a very conservative party when it comes to women's rights. Kabul has changed over the years, there are many women working and they might not be dressed in a way that Hekmatyar would consider appropriate. Has his ideology evolved over the years? What does he think about women's rights? When he was prime minister, he immediately enforced a dress code for women and it is said that he used to throw acid on the faces of female students who did not wear the hijab.

Karim: Has HIG asked you to wear this hijab?

This is the faith of Afghan people.

When HIG comes here, I will assure you, a huge number of Afghan people will ask us to put pressure on TV channels not to show programmes with women in them.

This is 99 percent of Afghan people - the microcosm of Kabul is only 1 percent. HIG's role is to join tradition with modernity.

It is our job to bring them together without causing a social explosion. These people you are talking about are exclusively modernists who have cut all ties to their people in the villages.

Al Jazeera: Will Hekmatyar be demanding a dress code for women in Kabul as well?

Karim: For me, in Kabul, I see nothing special [in terms of women's clothing].

But the villagers would think, look at this girl. For them it's unbelievable.

Finally, it's your choice. We will not force anything.

My personal opinion is that the freedom of man and woman to wear - of course within [limits of] respect - it's just common sense, it shouldn't be forced by anybody.

Al Jazeera: How close is HIG to the Taliban when it comes to its views on Islamic governance?

Just cutting the hand of a thief - this is Islamic government for them.

The way you do it is very different depending on time and situation. But the principle is responsibility and justice.

The only thing we shared [with the Taliban] during these 15 years was the [struggle for the] independence of our country. That was our only common point.