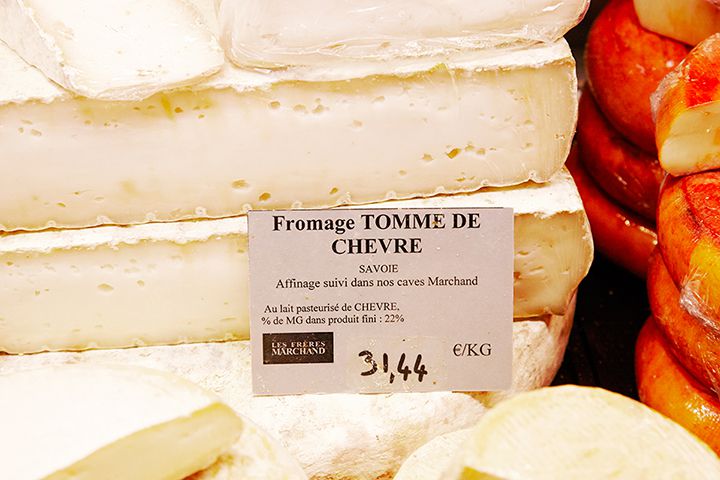 "In Nancy, nobody refers to us by our first name anymore. Here we're simply known as The Marchand brothers," Patrice, the middle brother, tells us with an amused glance - and gets out the latest copy of the local paper to prove his point. It contains an article about Les Frères Marchand - naturally without any mention of first names. The triohow big Philippe, Patrice, and Eric, are well known in the region, and the Marchand family name even more so.

The traditional family business has been retailing dairy produce for over six generations. In 1848, when le marché, the market hall, was built on the outskirts of the medieval inner city, the Marchands opened their first market stand and sold farm and dairy products. Their great-great-grandmother would bring in the goods from local farms within a 50 km radius.

Then when cars appeared on the scene in the late 1930s and fresh products could be transported more quickly, our family started to specialize in cheese.

The shop in le marché is still there and impossible to overlook thanks to its excellent location just by the main entrance. Nowadays, eggs, milk, or poultry are no longer found in the display. Instead, a large assortment of over 300 cheeses from all the French provinces as well as a wide selection from countries such as Italy, Holland, Switzerland, the U.K., and Germany, is proudly presented behind the modern glass counters. At the back of the sales counter, a cheese bar with a tasting counter can be discerned. Across the road, the brothers have opened a small bistro. They also operate a restaurant down in the medieval city center and five other cheese boutiques in other cities of the province. The cheeses are also exported to Dubai, Hong Kong, Tokyo, Bangkok, and Sydney where the Fromages des Frères Marchand can be found in exclusive restaurants and high-end shopping malls.

In less than 20 years, and in a branch that consists almost entirely of local trade, the brothers have managed to create a small international cheese empire. Though, of course, the Marchand brothers would never refer to their success in these high-flying terms. "We remain a small business with only 60 employees," Philippe reminds us modestly. He is the man in charge of buying and refining the cheeses.

Philippe is a professional affineur, which stands for cheese ager or ripening expert, and in charge of ripening the young cheeses until they reach the perfect degree of maturity.

This, in a nutshell, is what the Marchands are specialized in. Despite never having been cheesemakers themselves, they are experts at refining the raw product. How does this work? Philippe Marchand straightens his blue spectacle frames and enthusiastically starts explaining the process. "Why it's a bit like raising kids. Some cheeses arrive at the age of three days, others only get here when they're three weeks old. Then we accompany them on their pathway to maturity. We store them, wash them, rub them, and turn them over regularly." The laborious process of affinage requires the use of all five senses. "We regularly look over every single cheese we have in storage in the curing cellar: We observe how the color changes, we knock on the cheeses to detect irregularities on the inside. We also give the cheeses a squeeze to judge the degree of maturity. And of course we sniff the cheeses to ensure that they are ripening well and we extract tasting samples from the larger cheese wheels." Fifteen to 25 tons of cheese are stored in the ripening cellars surrounding the Marchand's family seat in the center of Nancy. Each cheese is numbered, stacked neatly on movable storage racks, and sorted according to the temperature and humidity it requires to mature.

Because the supply of cheeses maturing on site can't meet the high demand, the affineur tells us: "We always leave a part in storage with the producer. We never have enough room and are always on the lookout for more cellar space." That the Marchands actually leave purchased goods in storage with the producers is yet another testimony to the close relationship that Philippe has with his suppliers.

We work with 200 producers and I know every single one of them personally.

Not just personally: He knows them intimately. He knows when a generation is stepping down, whether the next one wants to take over, when marriages are celebrated, children are born, what schooling the offspring are doing, and whether too much sun has dried up the pastures. "Philippe even knows their phone numbers by heart. For years, Eric and I didn't even know where the cheese came from. One day we made him sit down and write us a list with all the names. He even goes on a special Tour de France twice a year to visit his cheesemakers, though not by bicycle," quips Patrice, the middle brother who is in charge of export and the restaurants. The eldest one rolls his large eyes in mock exasperation and immediately counters: "Well, it's important I know how the producers keep their livestock - whether the animals are being treated right. That way the milk turns out well and, ultimately, the cheese does too."

Three requirements are essential for the process of affinage: The raw product must be chosen carefully. The cheese has to be young and unrefined. And lastly, the season is crucial. "Comté cheese, for example, I only buy in June and July when the meadows are full of flowers and the grass is juicy. By August the grass is dry. Only after the second hay harvest in September and October, when the grasses have regrown, does the milk become fatty again and regain its high quality." The know-how of the process was passed down to all three brothers from an early age by their mother, Michelle, who deceased some 18 years ago. Her death spurred the three brothers to take over the family business together.

Our mother kept track of everything. She was the life and soul of the company, and when she passed away, we immediately lost a fifth of our customers.

As soon as the conversation turns to Michelle Marchand the three brothers become more serious; Eric, the quieter and most reserved of the siblings and in charge of administrative and financial affairs, makes his first contribution to the conversation: "Every affineur works in a different way. Philippe continues to use our mother's methods." The three brothers are also quick to emphasize that their cheeses today are in no way better than when Maman made them; they are simply more refined. They nod in unison and it is obvious that the memories of their mother are still very much alive. Her framed picture features prominently on the bookshelf of the restaurant in the city center. Father Michel, now 76 years old, has meanwhile stepped down and proudly follows his sons' business activities, despite not being quite sure why they always have to travel so much or what the point of all this activity abroad is. The result of all this activity, however, is considerable: Exports have increased by 57% in the last year, and the turnover goes up by approximately 6% each year. Over the past two years, especially, the company has moved from strength to strength. How did they go about achieving this? Philippe shrugs his shoulders and says: "We work a lot, basically seven days a week. Originally, our intention was simply to build up the business." Without a business strategy or a recipe for success, decisions were made based on gut instinct. There was no shortage of ideas and they discovered that, as brothers, they work well together. Patrice agrees: "If one of us has a project he wants to follow up, the others will support it. Always!"

Several years ago, the three of them found a huge mold for a cheese wheel in the attic along with a notebook containing their grandmother's handwritten notes. On one of the pages, the venerable old lady had written down "en detail" the recipe of a long forgotten cheese called Gros Lorrain. Straight away the brothers knew: This cheese had to be resurrected and put on the market. "It took us two long years until we were happy with the result. Today Gros Lorrain is one of our best sellers."

We strongly believe in the magic that can result from unexpected encounters.

"This attitude even got us to Japan, though we had never actually considered exporting there. That was pure coincidence and a pretty crazy story," Philippe tells us. It started with a Japanese woman who kept visiting the shop in the market hall. She came regularly for several months and though she never bought much, she did ask a lot of questions. Then out of the blue, she invited Philippe to hold a cheese conference in Tokyo. The Frenchman agreed and, two weeks later, he arrived at Tokyo airport where he was greeted like a rock star by a multitude of reporters and photographers. Still reeling from his long journey, the affineur was immediately expected to hold a lengthy conference - without any cheese and only a microphone in hand. Philippe soon felt uncomfortable and spontaneously invited the Japanese audience to do some cheese tasting. The conference took up half a day instead of the allotted three hours and had to be repeated three times because it was so successful. Today there are 19 shops in Tokyo that sell Les Frères Marchand cheese. "Some encounters lead to results, others don't," the brothers say with a grin and exchange a meaningful glance. The citizens of Nancy are obviously right: Never mind their first names - the threesome form a perfect unity as Les Frères Marchand.

Copyright © Branders Group AG All rights reserved. Any subsequent further processing, publication or permanent storage for commercial or other purposes without the explicit prior permission of The Brander / Branders Group AG is prohibited.