Migration policy and arms industry: The business with high-tech borders 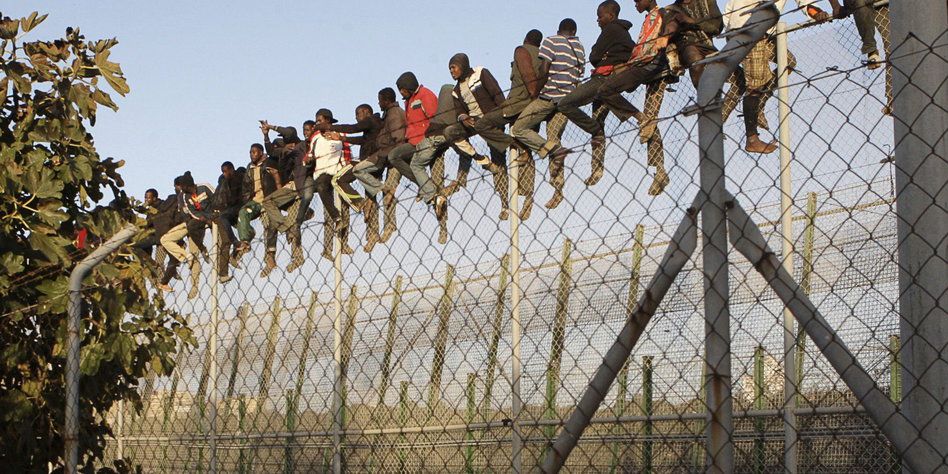 Three fences, supported by seven-meter high sandwalls, lead through the desert. Anyone who approaches captures underground motion sensors, surveillance cameras or one of the 50 radar systems at surveillance towers or on patrolling jeeps. All information goes directly to a control center: 14,500 kilometers of fiber-optic cables secure the fast data connection, 3,400 border guards are permanently in use.

The European armaments group EADS, now Airbus, delivered this border protection of the luxury class to Saudi Arabia in 2009. For around 2 billion euros, she set up the 900 kilometer border with Iraq as an antiterror wall, in the complete package from the need to determine the training of the border guards by German federal policemen.

The officials received their fees from the German Association for International Cooperation (GIZ), which received Saudi money from EADS. Federal Minister of Development and GIZ was at that time the FDP politician Dirk Niebel, meanwhile Cheflobbyist of the armor forge Rheinmetall, one of Germany's leading manufacturers of border installations.

Already with the fences around the Spanish enclaves in Morocco - Ceuta and Melilla - the European Union has pushed forward with its outer borders to the African continent. With the EU-Turkey deal, the EU migration shield reached the next stage: the Turkish wall to Syria is equipped with self-shooting systems, which shoot at an approach of 300 meters, made by the emerging Turkish armaments company Aselsan.

The enemy is driving bus

Now the EU is expanding its fortress down to the equator. From Central Asia to Central Africa, it wants to invest in the „robustness of the states", according to the latest EU strategy paper for its common foreign and security policy. In the EU neighborhood there are „turmoil", the „overlapping of uncertainty" the EU must counteract.

In the Frontex-Africa Intelligence Report 2015, the neighboring continent is presented as a region full of dangers. Frontex agents had visited the bus station in Agadez, the historical trading center in Niger. Through this bottleneck in the desert everything goes from West Africa through the Sahara to the north: goods, traders, migrants. Mostly by bus: Over the past years, overregional bus lines have sprouted up across the globe, a boom business.

For EU agents, bus operators are enemies: „People in Agadez regard themselves as service providers. Attempts to combat this growing industry could provoke local protests, „the report said. Then the airline Turkish Airlines, which offers low-cost flights between main African cities and Istanbul, is targeted. It is to blame that not only Syrians, but also Congolese, Nigerians or Cameroonians on the Balkan route advanced to Europe. Frontex CEO Fabrice Leggeri opens the risk analysis for 2016, pointing to „1.8 million cases of illegal border crossings to Europe".

This should be over now. In September, 26 African intelligence workers and border guards were summoned to the Frontex headquarters in Warsaw. The Africa-Frontex secret service community has been operationalized. The Africans are to transmit migratory data on a quarterly basis. With the immigration authorities of Nigeria and the Cape Verde, Frontex has already concluded a partnership agreement with the taz. Others will follow. The aim is to „analyze" all migration movements from Warsaw.

The EU's key technology is Integrated Border Management (IBM) developed by the European Union and applied for the first time in the Balkans. These are „intelligent" borderposts, which allow passers-by with the right papers to pass easily and quickly despite all technical safety precautions, and whose computer databases are networked with all relevant authorities: immigration authorities, security authorities, customs.

Through modern turnstiles the biometric passport is drawn. The on-chip data is matched with global databases such as Interpol to track down potential terrorists or counterfeit ID documents. With the help of dogs, heartbeat meters, air-borne scanners and X-ray systems, border guards in trucks should be able to detect blind passengers.

„Integrated management promotes the prevention of illegal migration and the fight against all forms of smuggling," says an internal strategy paper of the EU Commission on the negotiations with Nigeria, the taz. To this end, funds from the Emergency Relief Trust Fund for Africa can also be used.

German development cooperation helps. In Burkina Faso, the German GIZ provides „expert advice on the development of an integrated border management policy". In Mali, she advises „on the revision of the national border policy", the Federal Government said in response to a small request from the Linkspartei. In Chad and Mauritania, GIZ also supports the equipment and training of border guards and the construction of border stations.

All other ways to cross a border are now rigorously sealed with insurmountable kilometers of fence installations and monitored from the air. The European Union border watchdog is called the Eurosur: since December 2013, drones are looking for refugees, supported by geostationary satellites over the Mediterranean. Boats on the coast, wagons in the desert, migrant migrants - all this can be tracked live on the monitor at the Frontex headquarters in Warsaw.

A smaller satellite monitoring system, „sea horse", operates Spain with Mauritania, Morocco, Senegal, Gambia, Guinea-Bissau and Cape Verde. Currently, a system is being set up with Tunisia, Algeria and Egypt. According to the EU, Eurosur cost 338 million euros. A study by the Heinrich Böll Foundation assumes a minimum of 874 million, including development costs.

Since 2002, the EU has also invested EUR 316 million in the research of border technology. Leading armaments companies had access to EU funding: Airbus Defense and Space (previously EADS), Thales from France, BAE Systems from the UK, Italian company Leonardo-Finmeccanica, Spanish company Indra, German Fraunhofer Institute and Israeli companies. They equipped the EU's external borders in Bulgaria and Hungary with the latest technology: a super-precise air system from Airbus, which detects even the smallest objects from a distance of 220 kilometers. There is not even a fly through.

Lobbying organizations in Brussels such as the „European Organization for Security", led by former Thales manager Luis Rebuffi, the „Aerospace and Defense Industries Association of Europe", chaired by Mauro Moretti, also Head of Finmeccanica, and Thinktank „Friends of Europe" workgroups. For example, the „Smart Intelligence Borders" headed by the French corporations Safran and Thales, and the „AG Border Surveillance" led by the Italian electronics company Selex. Through technology partnerships, these are indirectly linked to leading companies

By 2020 more than EUR 6 billion has been earmarked for the protection of EU external borders. 2.8 billion come from the EU's internal security fund, 1.7 billion from the EU's Border Research Program. Approximately 1.5 billion are estimated for Frontex and Eurosur. In addition, there are financial giants: Libya 66.5 million euros, Mauritania 16 million, Lebanon 14 million, Tunisia 23 million, according to a study by the Dutch NGO „Stoppt Waffenhandel".

At the beginning of December, the Federal Cabinet decided to send up to 20 officials to Niger. Interpol trains border policemen in Mali, Morocco, Mauritania, Niger, Tunisia, Burkina Faso and Chad - financed by Germany. There are nine high-tech border stations between Niger and Nigeria, the Federal Foreign Office paying three, the European Union the remaining six.

„The market in Africa is certainly interesting, because there is a need," says an airbus spokesman for taz. Access is difficult, however, because of the lack of „responsible local business partners who meet our high standards". It would be easier to supply individual products such as radar technology or cameras.

„As users of border security systems, we believe that in principle all the countries that are faced with the problem of illegal border crossing are eligible. Talks in this direction also take place in individual African states, „says a spokesman for Rheinmetall der taz. But it is „too early to talk about concrete projects". „Airbus will be a member of the Airbus Group, and we will be pleased to announce the launch of Airbus.

A Dutch offshoot of the French armaments giant Thales equipped the Egyptian navy with radar technology worth 34 million euros in 2015. Airbus recently delivered a monitoring draft to the Bundeswehr contingent at the UN mission in Mali. The Italian company Leonardo-Finmeccanica supplied 15 monitoring helicopters to the Algerian border troops. Airbus boasts on its website that it has delivered its Spexer radar specially developed for border surveillance to three West and North African countries.

The world-wide total turnover with border technology is to increase from 15 billion euro in 2015 up to 29 billion in 2022, predicts the market research enterprise Frost & Sullivan. At present, American and Israeli companies still dominate this division. Europe's leading armaments companies want to catch up - in Africa. As a sales market, Africa is virtually limitless.