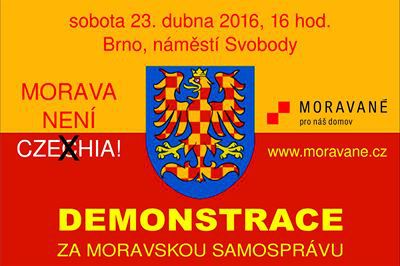 Wednesday, 14th of April, has made Czech history - literally. The highest state entities of the Czech Republic decided that their country would henceforth be called „Czechia" - 22 years after the first plan to do so. What seems to be a practical solution for the whole country is in fact the last step to supremacy of one part of the Czech Republic.

The new country's new name is - according to the authorities - an offer of a „suitable foreign-language version of the one-word term for our country, Česko". The thing is: Česko designates Bohemia, one of the three Czech lands alongside Moravia and the Czech part of Silesia.

When they got to know that they would be also Bohemians now, Moravians and Silesians were not happy. Some might have asked the questions the song Bohemian Rhapsody starts with: „Is this the real life? Is this just fantasy?"

There has been a long rivalry, especially between the Moravia and Bohemia. And there are many differences.

Moravia is a wine region and people talk in various dialects. Bohemia, land of the country's capital Prague, is known for its beer. And its very own language: the Common Czech.

This sub-version of the standard Czech language has its special rules and pronounciations - and is overtaking. Studies find that in Bohemia Common Czech is spoken even in six out of ten formal conversations.

Due to migration inside Czech Republic the language is spreading. Even in Moravia there are more and more Bohemian He's and She's Meaning „von/vona" instead of „on/ona".

More and more spend a Bohemain week („tejden") in the capital Prague, not a Standard Czech one („tyden"). And Prague itself, where you can find the beer bar Vokno - which would be called in Standard Czech „Okno" (window) - follows the rules of center and periphery and functions as an incubator.

Demands to change the language

Culture and media are more and more Common-Czeched-out. The dominance is so fierce, that already Slovaks that still consume Czech theater, books, movies and media like radio, have lost their feeling for what is the right Czech language.

Even some people are confused. There already demands popping up to make the Standard Czech bend to the Common Czech's norms.

That the Czech Republic now is to be called Czechia - thus Česko, which retranslates into Bohemia - is the last chapter of the Bohemian Rhapsody: the step to Bohemian supremacy.

„Moravia is not Czechia"

Many Moravians and Silesians rise up against this what could be Bohemia's final victory. This saturday there will be a demonstration with the titel „Moravia is not Czechia".

But as sung in the Bohemian Rhapsody „Anyway the wind blows". In both Common and Standard Czech it means the same: Vítr tak či tak fouká.