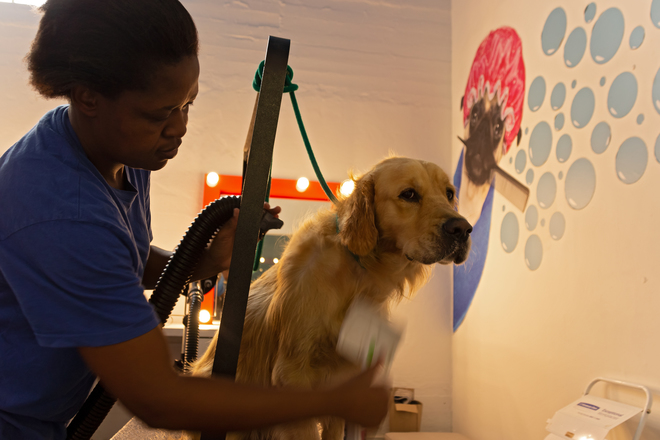 Four-legged guests at Yanic Klue's pet hotel can get pampered at the spa or take a water gymnastics class. For some people, though, it's hard to square this luxury Cape Town spot with the city's poverty, writes Tycho Schildbach

While his owner is skiing in France, the dachshund is spending two weeks being pampered at what could be the world's largest pet hotel: Guests enjoy trips to the spa, the groomer and water gymnastics classes.

But the AtFrits hotel isn't in New York or London; it's in Cape Town.

There's a lot of poverty in South Africa - the amount it costs to spend one night in the hotel would be enough for a whole family to live off for several days. While many animal lovers love the hotel, others find the luxury reprehensible.

"It was really nice to know that in the suites and play areas they have cameras - just in case we want to look in on him," said Ziggy's owner, Sheri Hasson, from the Alps.

Via the hotel's app, she can see live pictures of her dog on her smartphone. The 54-year-old puts her dog's welfare above everything else. "If I know that she's in a loving environment, I'm happy to pay a bit more," she says.

The hotel is located in central Cape Town, sandwiched between the city's best-known restaurants and bars, and it's clear on arrival who's the target clientele: Instead of a red carpet there's a green lawn and in the lobby there are shelves with dog treats and outfits.

Instead of numbers on the room doors there are names like "Catwoman" and "Jurassic Bark."

The hotel has accommodation for a total of 250 dogs and 33 cats, with a room costing between 11 and 39 dollars.

Yanic Klue doesn't think her establishment is overly decadent. "We're animal lovers and we don't want to become ridiculous." That means, for example, that in the spa, employees cut claws, clean teeth and cut the animals' hair, but nobody leaves the hotel with a pink pelt.

That said, they do cater to some special requests. "One dog we have, Maximilian, has a mohawk." And they did create a lion's mane for one customer.

Klue, 35, hardly has time to talk as she strides through the hotel, named after her late dog Frits, as every guest enthusiastically greets her.

In the basement, Klue explains why she also markets the hotel as a rehabilitation centre. In the pool there, animal therapist Tineka Kriel is practising swimming exercises with the terrier Clara.

The exercises help the animals after injuries or operations, she says.

AtFrits isn't alone in offering luxury pet care services - it's a growing trend worldwide. Germans, for example, spent 4.8 billion euros (5.5 billion dollars) on their pets in 2017, compared to 3.3 billion euros in 2007, according to the industry association Heimtierbedarf.

And in the United States, there is a chain of luxury pet hotels called The Barkley.

Klue believes that with 2,400 square metres of space, AtFrits is the biggest pet hotel in the world and has even requested that the Guinness Book of Records verify it.

But when pets are pampered in Cape Town, it's more frowned upon than it would be in Berlin or New York. Almost a fifth of South Africans lived under the poverty line of 1.90 dollar a day in 2015, according to the World Bank.

Is it therefore objectionable to be running a luxury hotel for pets? "No, but it provides an unequivocal illustration of the inequality in South Africa," says poverty researcher Rocco Zizzamia of the University of Cape Town.

A 2018 World Bank report concluded that not only are rates of inequality in South Africa among the highest in the world, they have increased over the past 25 years.

"I work up to 12 hours a day, but I still only have around 700 rand (49 dollars) a month for each of my boys," says petrol station worker Lindile Zweni, who lives in a township in Cape Town.

He grins mockingly when he hears about the pet hotel.

"I can't understand how other South Africans can spend almost the same sum on their dog in one day."

Meanwhile, Hasson is paying a total of 150 dollars a night for Ziggy and her other three dogs at AtFrits. The hotel "might be decadent. But my dogs are like my children," she says.