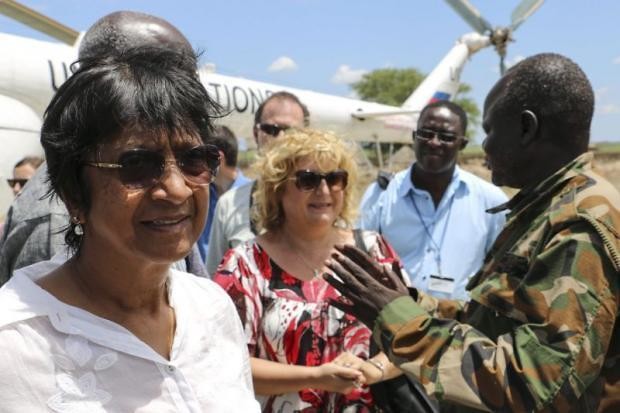 The South African jurist Navanethem Pillay shields the ICC against criticism from prominent African leaders who accuse the court of being a tool of rich nations and focusing disproportionately on the African continent. Typically, the personal motives of these men are obvious: They have reason to fear the ICC ( see D+C/E+Z e-Paper 2018/02, p. 15).

"Navi" Pillay - as she is affectionately known - vehemently rejects accusations of bias. She points out that the court has strong African backing and that most cases handled by the ICC were referred to it by African governments. Having served as a judge of the ICC as well as the International Criminal Tribunal for Rwanda (ICTR), Pillay has extensive personal experience with international criminal justice. She is best known for her tenure as UN High Commissioner for Human Rights from 2008 to 2014.

Many Africans are tired of impunity that autocrats and warlords enjoy, Pillay says. She emphasises that Africa has taken international judicial approaches, even without relying on the ICC. She cites the case of Hissène Habré, the former Chadian dictator. A special tribunal of the African Union tried him. In May 2016, he was sentenced to life imprisonment for rape and ordering the killings of ten thousands of people.

At the same time, Pillay regrets that the ICC's jurisdiction is limited. If a perpetrator is not from one of the Court's member states, or the crime was not committed in one of them, the ICC can only start proceedings under two conditions: either the UN Security Council gives it the mandate to do so, or the country in question accepts its jurisdiction without being a member. As Pillay explains, this is why the ICC is unable to respond to the war in Syria or Israel's actions in the Palestinian Gaza Strip.

Despite discord in the Security Council, the UN is not completely paralysed in regard to Syria however. In 2016, the General Assembly created the International, Impartial and Independent Mechanism on Syria (IIIM), which collects evidence like a prosecutor. The evidence can eventually be used in legal proceedings.

The public is hardly aware of the IIIM, but its relevance must not be underestimated, says Michelle Jarvis, its deputy head.According to her, history proves that "preparatory work" is crucial. Collecting evidence after the fact was painstakingly difficult when international tribunals took up cases. According to Jarvis, preliminary documentation can make a difference.

During a panel discussion at Germany's Foreign Office in Berlin in May, Jarvis highlighted the relevance of international institutions working hand in hand with national authorities. In her eyes, the UN International Criminal Tribunal for the former Yugoslavia (ICTY) is a case in point. Its evidence gathering would have been less successful without the help of local-level prosecutors who significantly contributed to the collection of over 9 million pages of documents.

David Tolbert is the former head of the non-governmental International Center for Transitional Justice in New York. He knows that international criminal justice is difficult to bring about. In order to successfully prosecute high-ranking military officers, one needs an enormous amount of evidence, he says. Further exacerbating the difficulties are "immense organisational challenges", including issues of security, funding and language.

In order to achieve reconciliation and lasting peace within society, other things matter beyond the prosecution of crimes, Tolbert says. In Colombia, for example, Tolbert considers peace a "long-term, inter-generational process" after decades of civil war. The peace treaty agreed by the government and the left-wing rebel group FARC is just a starting point.

Navi Pillay similarly sees a need for action beyond ensuring an end to impunity. "No developing country produces arms," she says, so without arms exports to crisis countries, conflicts could not escalate the way they do.