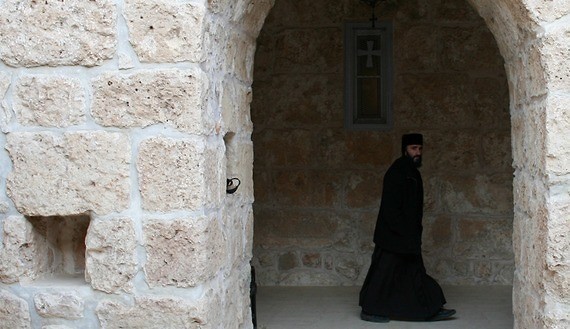 Dressed in the black robes and embroidered cap of the Syriac monk, Father Yoqin leaned over the ramparts of Mor Augin on a recent day and lowered a hose to a municipal fire truck waiting to pump the weekly water supply up to the mountain monastery. Abandoned for decades, Mor Augin was reopened a couple of years ago as a sign of the Syriac church’s determination to keep the faith alive here in its homeland in southeastern Turkey, despite the dwindling numbers of Christians in the region. On a clear day, Father Yoqin can see over the Turkish border and Kurdish-held territory in Syria all the way into Iraq, where Mount Sinjar rises from Nineveh province in the distance. But the monk does not need to look that far to see his people endangered. A glance down to the plains rolling out below the mountain will suffice: Most of the monastery’s own lands there, hundreds of acres, have been seized by Kurdish tribes, who are armed and determined to hang on to them.

Nor is this an isolated case, says Serhat Karasin, a lawyer in Diyarbakir who has represented the monastery in its long-running attempts to recuperate its properties. Recent land grabs targeting Christians and Yezidis in southeastern Turkey number in the thousands of cases, by his estimate. Karasin has just returned from talks with district officials, provincial governorate and the interior ministry in Ankara on behalf of the Yezidi village of Efse, not far from Mor Augin, whose former inhabitants are being prevented from returning to their hamlet by the armed forces of a neighboring Kurdish tribe. “They have threatened the Yezidis that they will suffer the same fate as those of Sinjar,” if they persist in trying to return, Karasin said, adding that he had pleaded for the urgent intervention of the state. The authorities had shown themselves sympathetic, but not actually done anything yet, he said.

Hardly a Christian village in the Tur Abdin, the ancient heartland of the Syriac church between the Tigris and the Syrian border, has been left unaffected by the turmoil over land ownership that was triggered by the modernization of Turkish land registry records in the 1990s and 2000s, Yuhanna Aktas, president of the Syriac Unity Association in Midyat, said in a recent interview. The Yezidi had fared even worse, he added. The Turkish state’s land registration works were undertaken at a time when most Christians and Yezidis, as well as many Kurds, were living in European exile, having fled persecution, poverty and the Kurdish war in which they were crushed between the fronts, he explained. With the land registration, many lost their land to the treasury, which is entitled to confiscate land when it has lain fallow for 20 years, or to the forestry, which can seize all forested land.

“The law does not ask why people left their land, or why they had to leave,” said Rudi Sümer, a Syriac lawyer in Midyat, who has stacks of such cases on his dock. As a result, the treasury seized the lands of refugees who had been expelled from their villages by the military, because they had not tilled it, and the forestry confiscated vineyards the army had burned down, because of the low oak scrub that sprang up on them during their owners’ absence. While these formally legal expropriations have affected the entire population of this war-torn region, a third form of land grab has specifically targeted the non-Muslim minorities. In many cases, their land was appropriated by Kurdish tribes, who either registered it to their names or simply seized it by force.

“They bore false witness for each other,” Ibrahim Ogur, a young Syriac working on a construction site in the village of Mzizah, said about a local case of land grab, in which a Kurdish villager laid claim to the land of a Christian. “None of them would testify on behalf of my father,” he added. The house he is rebuilding is meant for his cousin, who is considering moving back from Germany to the Tur Abdin, Ogur explained. “If these land problems are solved, then many Christians will return home,” he said.

Paradoxically, the land grab dispute is a sign that the situation in the Tur Abdin has improved in the last few years and that Syriacs have indeed begun to return to the region,  Erol Dora, a deputy from Mardin and the first Syriac in the Turkish Grand National Assembly, said in a recent interview in Ankara. “People once fled and left the land, now they are returning, and the land is regaining value,” he said. At the same time, the conflict is currently the single biggest obstacle to a wider return of Syriacs and Yezidi to the region, Dora agreed with most experts interviewed for this article. Across Europe, thousands of Syriacs are waiting and watching how this issue is resolved, Syriac diaspora associations say. Out of some 250,000 Syriacs currently living in Europe, an estimated 25,000 are affected by the expropriations in Tur Abdin, Johny Messo, president of the World Council of Arameans (Syriacs) said in an electronic message.

With law suits dragging on for years inconclusively, the People’s Democracy Party (HDP), the Kurdish party which commands a large following in the region and to which Dora belongs, has stepped in to mediate between Syriac land owners and Kurdish claimants in several cases, including that of Mor Augin. But although the Kurdish tribe occupying monastery lands is aligned with the HDP and despite the personal interventions of party chairman Selahattin Demirtas and of Ahmet Türk, a respected Kurdish feudal chief, negotiations proved fruitless and were eventually abandoned. “You have to remember that land ownership is something for which Kurds kill each other too”, Dora said, acknowledging that the party held little sway here.

Nor does the state’s writ go a long way in Turkey’s Wild East. Though the Jandarma, the para-military police force, may turn up in response to an emergency call, conflicts in remote mountain villages are generally left to sort themselves out on their own. “There is no rule of law in the region, there is only the rule of force,” said Dora, the TBMM deputy. Added to that comes the deep distrust of the minorities in the Turkish state and its institutions. “Why is no one calling me about this?” asked Oguzhan Bingöl, the district governor of  Midyat, brandishing his smartphone under the Turkish flag in his office. Bingöl posts his mobile number on the district’s webpage and encourages citizens to call him with their complaints, he said, but on this issue his phone is silent.

Like so much else in southeastern Turkey, the resolution of the land grab issue is tied up with the peace process there, Serhat Karasin, the lawyer, said. To that effect, he and a commission of legal experts have submitted a draft proposal to the government, calling for a compensation scheme to be included into the scope of the settlement of the Kurdish conflict. The commission proposes that the state step in to mediate conflicts and to compensate the victims of expropriations with treasury land – deliberately not with money, Karasin explained, but with land, in order to prevent another exodus from the region. “The individual legal process cannot redress this fundamental wrong that has been done,” Karasin said. “The state must take responsibility.”