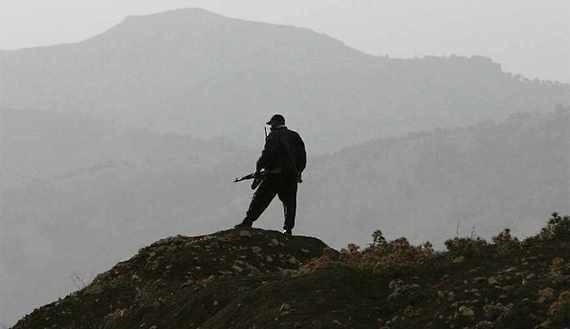 Perched atop a boulder in the desolate landscape of Sirnak province, his assault rifle slung on his back, Ahmet pointed at a stretch of the deserted road that runs through these parts down to the Turkish border with Iraq and Syria.

"It was over there that my uncle was killed in a PKK [Kurdistan Workers Party] ambush on a civilian minibus in 1992," he said. "That's when I picked up his gun and took his place with the village guards."

Ahmet was 15 years old when he joined the guards, the Kurdish paramilitary group mustered by the Turkish state to fight alongside the army against the PKK. Age 36 today, he has been standing guard against rebel attacks on this road for 21 years.

Like Ahmet, tens of thousands of Kurds remain armed against the PKK in a state-run system that has fostered dependency and crime, stoked blood feuds and fomented enmity across the impoverished region. As an end of the Kurdish conflict appears to draw close, the question of how to disband, employ and reintegrate the village guards and their large families becomes increasingly pressing.

According to the Interior Ministry, Turkey currently counts 65,838 village guards at the ready. Of these, 46,495 are employed by the state as full-time paramilitary fighters, while the remaining 19,343 men are volunteers who are armed, but not paid, by the state.

Established in 1985 by the addition of an article to Turkey's Village Law describing the measure as "temporary," this paramilitary force has become as difficult to disband as it is simple to recruit.

According to the letter of the law, guards are selected by a village headman or village elders, who then "write their names on a piece of paper and bring it to the district official." The process, as described by Ahmet, is no more complicated in practice.

"You show up, you're handed a gun, ammunition and a hand grenade, you sign your name and that's it," he said.

The motives to join up are more complex, the Diyarbakir Institute for Political and Social Research found in a study published this month. Many guards signed up under pressure from the military, particularly under threat of eviction from their villages, in the 1990s, while others joined to protect their children from being abducted into rebel ranks or, like Ahmet, in response to PKK attacks. In recent years, new recruits have been motivated by tribal affiliation with the guards and by economic necessity.

Contrary to what the name suggests, and to what many guardsmen initially thought they were signing up for, village guards do not just patrol and protect their village. Village guard battalions have been sent into battle alongside army units throughout the conflict, even participating in cross-border operations into Iraq.

"On dangerous missions we are always sent out in front," said Ahmet. "They tell us it's because we know the terrain, but I doubt that is the real reason," he added with a laugh.

According to village-guard associations, 1,650 guards have been killed in action since the conflict began. The number of army personnel killed in that period is 6,200, according to the Defense Ministry.

The institution has exacted a high price from society in southeastern Anatolia. Village guards have been responsible for hundreds of killings, kidnappings, rapes and robberies over the years, according to the Turkish Human Rights Association. Old scores have been settled with the guards' state-issued weapons and blood feuds have become bloodier. In the most infamous such case, 44 civilians were massacred at a wedding in Mardin province in 2009 by village guards wielding their assault rifles in one of the land disputes common to the region.

Today, the village guards are one of the main obstacles to the return of refugees to the region, said Göc-Der, an association that supports migrants, in a recent report, citing numerous instances of confrontations between returnees and armed guards who have settled on their land during their absence.

Among those joining human rights groups in calling for the village-guard system to be abolished is the European Union. The paramilitary force "remained a cause for concern," the EU said in its recent progress report on Turkey.

But dissolving the force will prove to be difficult.

In the barren hilltop hamlet that is Ahmet's home, all 30 able-bodied men are enlisted in the village guards as professionals, and several older men, like Ahmet's father, are retired guardsmen. The guards here take turns with those from the surrounding villages, which belong to the same Kurdish tribe, standing 48-hour sentry shifts on the road down in the valley, as ordered by the local military command.

"We were once all farmers. We raised livestock and crops," Ahmet said in an interview in his village. But after decades of fighting in the region, with pastures and fields turned into battlegrounds and declared off limits by the military, the land lies fallow today. "The fighting is over now, but so is farming around here," he said. "If we were not with the guards, we could not stay in the village another day; there is no work, no income, no livelihood here."

Even as things stand, with every household in the hamlet drawing a guard's monthly pay of 900 lira ($447), the village is literally dirt poor, its plentiful children kicking up dust on unpaved paths between mudbrick huts. One of the guards on Ahmet's watch, a man named Galip, feeds three wives and more than 30 children on his pay.

The average household size in Sirnak is the highest in the country, more than twice the national average at eight heads per house, according to the Turkish Statistical Institute. The province also has the highest unemployment rate in Turkey, according to the same source, and the second highest number of village guards, surpassed only by Hakkari on the border with Iran and Iraq.

Against this backdrop and as hopes rise in the country for a lasting settlement to the Kurdish conflict, the village guards have begun to worry about their own future.

"We have never stood against the [peace] process," said Seyithan Karadag, president of the newly formed Federation of Village Guards of the Southeast, at the body's founding convention in Diyarbakir this summer. "But we have been unjustly treated for years and we want it fixed now."

Among the main demands of the village-guard associations are recognition as civil servants, social-security benefits and pensions.

"Every civil servant has health insurance and social security, but we have no rights," said Ahmet. "We have fought and died for this country, and what are we given? A pauper's pass, nothing more," he added in a reference to the "Green Card," a health-care scheme for the poor that was extended to the village guards a few years ago.

Alternative employment is also high on the list of the guards' demands.

Faced with the challenge, the government has been hedging its bets. Interior Minister Muammer Guler said earlier this year that the village guards would be dissolved "in time, as the need for them ends in the course of the solution process," but would provide no time frame. "This large community that has worked self-sacrificingly to combat terror should not worry about its future," Guler said, but again did not offer specifics.