The Turkish art that was lost in translation 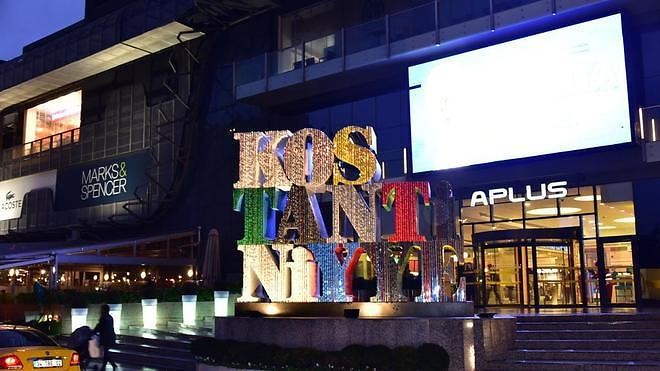 It was with a thrill of anticipation that Ahmet Gunestekin pulled the white tarpaulin off his sculpture Kostaniniyye at a festive opening in Istanbul on his recent 50th birthday.

Several hundred friends and admirers were assembled to applaud the unveiling of the colourful, five metre high sculpture that a private art collector had installed outside his shopping mall in the western Atakoy neighbourhood.

"I was so excited for the Turkish people to see my art," Gunestekin told The National. Although the Turkish artist enjoys international success, it was the first time one of his works went on display in Turkey outside of galleries and collections.

The encounter, which occurred in late December, did not go as he had hoped.

Within hours, the sculpture was attacked by an enraged mob and the shopping centre flooded with complaints. By midnight, the police had shrouded the art work in a black tarpaulin. Under pressure from municipal authorities and in the face of arson threats against the shopping centre, Gunestekin reluctantly agreed to dismantle it.

By morning, the sculpture was packed in a crate and placed in storage - unlikely to see the light of day again in Turkey.

The art work, previously shown to acclaim at the most recent Venice Biennale, is composed of painted metal letterings that spell out the historical names of the city, including Byzantium, New Rome, Constantinople and Istanbul.

The letterings come together with outlines of the city's historical monuments, churches and mosques to form 13 huge letters spelling the word "Kostantiniyye", which was the Ottoman name for the city.

This last fact was apparently not known to the protesters who descended on the shopping mall en masse after an incendiary tweet by a TV journalist Alper Tan of the Kanal A channel denouncing the sculpture as a Byzantine intrigue.

The problem, it emerged, was that the protesters confused the Ottoman name "Kostantiniyye" with the Greek or Byzantine "Constantinople".

An Arabised version of the Greek name, the designation Kostantiniyye was used by the Ottomans on official documents and coins for the duration of their nearly 600-year rule, Gunestekin explained. It was only in the Turkish Republic that the city was officially renamed Istanbul by Ataturk.

"We consigned the Byzantine Empire to history in 1453," an enraged protester outside the mall shouted, referring to the conquest of Constantinople by the Ottoman sultan Fatih. "Are you trying to revive it?"

"Our ancestor Fatih buried you, and we will bury you again," another nationalist demonstrator said, in remarks broadcast on an Islamist TV channel.

"These people call themselves the heirs of Sultan Fatih, when in fact it was Fatih who named the city Kostantiniyye," Gunestekin lamented. "Their ignorance is really the worst part of it."

It was another defeat for the cosmopolitan camp in the culture war that is raging for ideological hegemony over this age-old city on the Bosphorus, with Ataturk's Republic morphing into an as yet undefined "New Turkey", as the government's slogan has it.

In a similar case, nationalist protesters forced the temporary removal of a sculpture from the Contemporary Istanbul art show in November, because they objected to the depiction of an Ottoman sultan's portrait on the female figure created by the artist Ali Elmaci.

And banners strung up in Istanbul in December depicted a man in an Ottoman fez knocking down Santa Claus or Saint Nicholas, a historical native of Anatolia, to the slogan "We are Muslims - No to Christmas and New Year celebrations".

The ahistorical and nationalist ideology of the protesters is at stark odds with that of Gunestekin, who has made it his life's work to explore the colours, themes and motifs of Anatolian history and cultures in his art.

Born in south-eastern Anatolia and of Kurdish origin, the artist has travelled through all 81 of Turkey's provinces to immerse himself in the country's Assyrian, Armenian, Greek and Kurdish heritage.

His colourful paintings and sculptures reflecting this rich culture have gained Gunestekin an international following. He is under contract to galleries in several European countries as well as in the US, where his new show opens in New York on January 11.

But his work has been less popular in Turkey, whose contemporary art establishment has traditionally looked to the West for inspiration rather than to its own cultural roots.

Nevertheless, Gunestekin was shocked to find that none of Turkey's leading artists or art institutions would come out in his support after the attack on his sculpture.

"There is an incredible fear in this country," he said. "I appealed to everyone in the art world to protest this lynching of my sculpture, but not a single artist, institution, or association would do so."

An especially striking answer came from the Istanbul Foundation for Arts and Culture, or IKSV, one of Turkey's leading art institutions, Gunestekin recounted. "They wrote back to say that if they were to condemn every instance of art censorship, they would never finish."

The IKSV did not respond to a request for comment.

To Gunestekin, this was the last straw. "This letter from the foundation has destroyed my last hope in the country," he said. "I am disgusted by this fascist mentality."

"And I feel so alone that I see absolutely no point in staying in Turkey anymore."