QUAD is good for Japan, and perhaps the US, but is bad for Australia and India 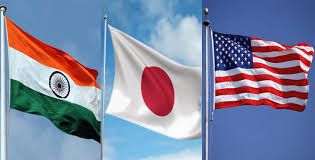 The genesis of this “Quad” is an idea that it is better to think (talk) about an “Indo-Pacific” region than an “Asia-Pacific” region in order to draw India into a grouping that is clearly aimed against China.

For Japan the Quad boosts the security of its international trade routes at little cost. The Quad will not be welcomed by China, but the general lack of a good relationship between China and Japan means that it has little to lose.

Some have postulated that the Quad will work to drive Russia and China closer together. While President Putin will see the Quad as another example of the US attempting to maintain its position of unipolar world dominance and will feel for China, Russia is wary of the growing power of China (and the Central Asian tentacles of its Belt and Road). Moreover, it is trying to woo Japan for financial benefit in the Russian Far East (although the Southern Kuril Islands / Northern Territories dispute means that this financial benefit will remain elusive).

For the US, the other countries in the Quad will be seen as welcome supporters to maintain its still dominant position on the seas. But, the negative is that it is not in the ultimate interests of the US itself to try to control the seas off the east coast of China, except if it wants to provoke an eventual conflict to satisfy its own sense of importance.

But, what are the benefits for Australia? About 30% of Australia exports go to China, with Japan and South Korea accounting for only 20%. China wants to dominant the South China Sea so that it can keep importing from resource rich countries such as Australia. If necessary, there are alternative sea routes to Japan and South Korea.

As well as adversely impacting on Australia’s relationship with China – although given Australia’s existing alliance with the US, the net impact is likely to be small – Australian participation in the Quad will encourage India to take part.

Indian exports to Japan and South Korea are very small.

Both Australia and India would be better-off if India concentrated on achieving a dominant security position in the Indian Ocean while at the same time trying to prevent a deterioration of relations with China.

China’s Belt and Road is foremost about energy security.

Russia, Kazakhstan and Turkmenistan (and perhaps Iran) can provide a lot of oil and gas to China, but this all depends on the attitude of Russia which could – if it wanted to – severely disrupt such flows by a variety of mean associated with is historical position in the region and present military bases. While Russia’s influence in Central Asia may be trending down, it will always control the Caspian Sea with its potential to intimidate Kazakhstan, Turkmenistan (and Iran).

China needs and wants to continue receiving energy from the Middle East. The Straits of Malacca are a possible choke-point (along with non-Chinese control of the South China Sea), so China is ensuring that such energy can also be delivered via Pakistan and Myanmar.

India aims to be a player in Central Asian affairs mainly, it would seem, to counter China’s Belt and Road. This Central Asian ambition is largely impractical and unnecessary as any Central Asian resources can be accessed elsewhere, and the only way for India to gain such access is via Iran (particularly Chabahar port).

Participation in Quad would mean that India was spreading itself too thin, and needlessly provoking China by impinging on its vital maritime security interests in a similar way as it is attempting to do in Central Asia. This is harmful to both India and Australia.

(The views expressed are solely of the author)