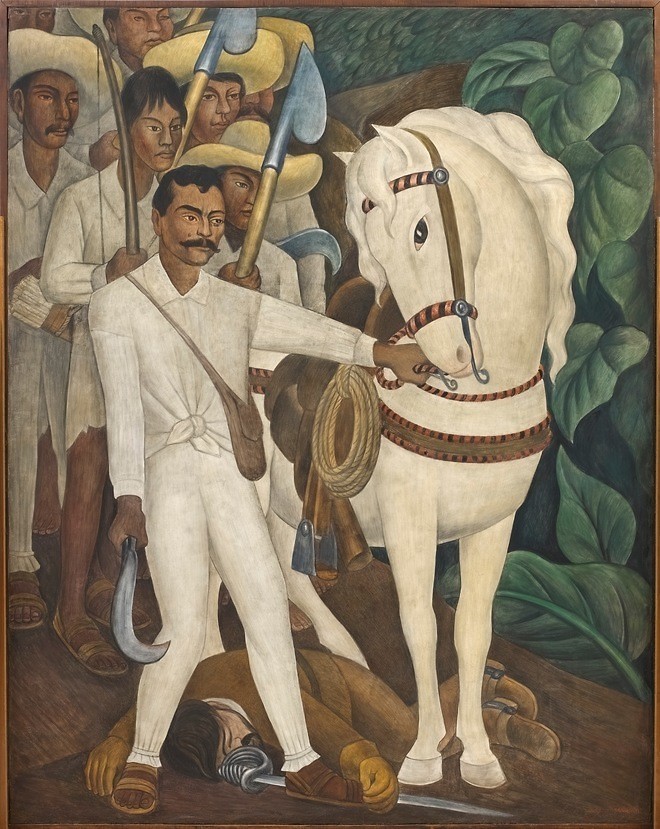 When the Museum of Modern Art mounted Diego Rivera's first solo museum show in 1931, the 45-year-old Mexican painter was already an international celebrity. Six weeks before the exhibition opened, journalists queued up to interview him in his temporary studio at MoMA, where he was working on the portable frescoes that would form the heart of that show. Standing with paintbrush in hand, Rivera bantered with reporters while deftly drawing figures into the quickly drying mixture of plaster, marble and lime.

Now five of those frescoes are again on display at MoMA in "Diego Rivera: Murals for the Museum of Modern Art." Eighty years on, the show is a revelation in many ways.

The sheer visual power of these works remind us that Rivera is one of the twentieth century's greats. To stand in front of the wall-sized fresco of Emiliano Zapata leading a white horse is to come face-to-face with an artwork as iconic and timeless as Matisse's "La Dance" or Picasso's portrait of Gertrude Stein.

Rivera's line is gorgeous; his use of color-ranging from the many browns of the peasants' faces and the deep greens of the vegetation to the chalky whites of their garments and the majestic horse-is both subtle and compelling. With its ground marble dust glittering under the museum spotlights, the fresco looks as fresh today as it must have when Rivera first limned it in December of 1931.

How astonishing it is to realize that this monumental work, although well known from picture postcards, has been hidden away from public view in MoMA's storage rooms for most of the last seven decades.

The story of how one of the twentieth century's most brilliant artists was first embraced, then shoved out of the art history canon in the United States is a long and complicated tale, whose many subplots have yet to be explored fully.

Rivera's famous political run-in with the Rockefeller family over "Man at the Crossroads," the 1933 mural they commissioned for the RCA building, then subsequently destroyed, is just one chapter. Letters on this subject from Nelson Rockefeller, Rivera and others form a fascinating part of the current MoMA show and offer some essential historical context.

But the role of the press, the academy and leading art critics like Clement Greenberg in defining the boundaries of Modern Art during the Cold War years is equally important. Only by untangling the fine skein of artistic attitudes and political ideologies can we begin to answer a question as burning for our contemporary art world as it was in the 30s, 40s and 50s: who makes it into the art canon and why?

In the United States today, Rivera's reputation is still heavily tarnished. Often he's dismissed as a "political propagandist," much as he was during the height of the Cold War. One wishes these critics would spend less time immersed in theory and more time using their eyes.

As the new MoMA show makes clear, Rivera was a superb draftsman.

Although devoid of color, the large, preliminary, charcoal-on-paper cartoons he drew for the frescos are impressive works that stand on their own. Pneumatic Drilling (1931), a cartoon for the now-missing fresco of the same name, shows two workers at a New York construction site, heaving the full weight of their bodies onto their jackhammers. The thrust of their shoulders, the folds of their jackets and the twist of cables snaking around them telegraph the rhythm and cacophony of the scene.

A series of black and white lithographs of Mexican subjects that Rivera did the following year have a similar swing to their line. Something about the sensuous compositions and the sculptural quality of the figures are reminiscent of Picasso, Rivera's Spanish friend from his Paris days in the nineteen-teens. One can easily imagine the two high-spirited artists engaged mano-a-mano in a Montmartre café--the weapons of choice? Sticks of charcoal.

Two Rivera frescoes on New York subjects are less artistically successful than the Mexican-themed ones, but they provide plenty of historical and political interest-especially at this moment. One shows a cut-away of Manhattan: in the top third of the panel, the skyscrapers of the Radio City neighborhood tower glamorously overhead; in the middle is a glass-enclosed wharf, where hundreds of homeless men sleep on narrow mattresses; the bottom section depicts a high-security bank vault where a few privileged customers inspect their deposits.

Painted during the worst days of the Great Depression, it was Rivera's outcry against the capitalist system that had brought so many people so low. Rivera dubbed this work Frozen Assets, a subject that has special resonance again today.

Curated by Leah Dickerman and supported enthusiastically by MoMA's director, Glenn Lowry, the Diego Rivera show is as exciting politically as it is artistically. With its wall texts in both English and Spanish, the show affirms our cultural ties to Mexico.

It also takes a big step toward reexamining Rivera's legacy here. As Dickerman points out in her excellent catalog essay, Rivera "had a fundamental impact on the future course of art in the United States." His murals were themselves a brilliant argument for public art.

The work of Rivera and his fellow Mexican muralists provided the model for the WPA's government-sponsored program, which ran from 1935 to 1943, employed thousands of artists and was the largest state-sponsored public art program ever seen in the United States.

Yet less than a decade later, political winds that led to the hysteria of the McCarthy period, brought a sea-change in art criticism and the museum world. By the late 40s and early 50s, abstraction had suddenly become so much safer than figurative and socially conscious public art.

The shadow of those years has taken a long time to recede. But the new Rivera show is one of several in recent years to suggest change is on the horizon at last. Perhaps it's time Americans-including the folks in Washington-learn to appreciate public art of the first-rank again. May MoMA's Rivera show help to lead the way.

Diego Rivera: Murals for the Museum of Modern Art