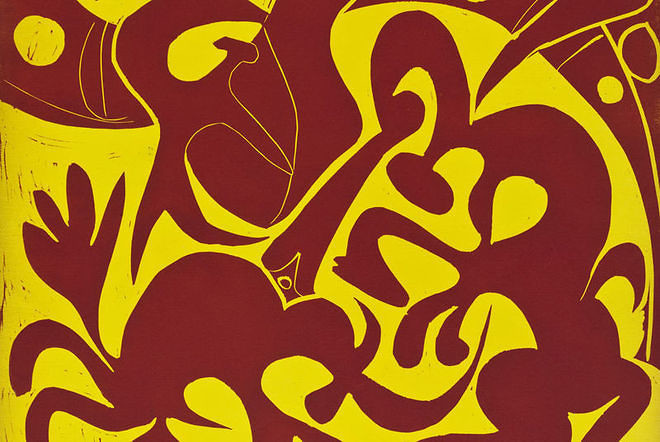 Picasso's name usually conjures images of the well-known paintings: Three Musicians, Girl Before a Mirror, Guernica, the portrait of Gertrude Stein. But the insatiably experimental Spaniard, who spent most of his life in France, worked in more visual media than most of us can name and produced a body of over 18,000 works.

In addition to the oils, pastels, gouaches, drawings and watercolors, he did prints, sculpture, ceramics, collage, stage sets, ballet costumes... and the list goes on.

Sitting at the lunch table, biographer John Richardson recounts, Picasso often transformed burnt matchsticks and torn napkins into little people or birds. When he was feeling especially mischievous, he sometimes sculpted faces in the food. Everything he could get his hands on became the stuff of art.

Of Picasso's prodigious, multimedia output, his works on paper rank up there near the paintings for their virtuosity and variety. And among them, his prints are some of the most interesting. Printing technology allows for many passes at the same design and Picasso's prints reveal him working and reworking ideas and forms, playing with texture, density, light and dark.

He even produced series of prints that developed stories-intriguing and often funny takes on classical mythology processed through his rich imagination.

Of the 2,400 prints Picasso made during his lifetime, New York's Museum of Modern Art owns more than 1,000 of them. A tenth of these have been arranged thematically by curator Deborah Wye and are now displayed in the engaging show Picasso: Themes and Variations.

At the entrance to the exhibition, four handsome portraits of art dealer Ambroise Vollard (1836-1939) are beautiful examples of how Picasso could rework a subject, making it fresh and arresting each time. On March 4, 1937, in one of his manic fits of creativity, he rattled off four etched plates in one day.

Although based on the same pose-the somber-faced Vollard stares with furrowed brow into the middle distance-each print uses different textures and tonal values and conveys a distinct mood. Viewing them as a sequence, one has the feeling of walking deeper and deeper into Vollard's brooding mind.

In another series, Two Nude Women (1946), Picasso begins with a charming and somewhat saccharine bedroom scene, then slowly abstracts the image over the course of a month until-in its fourth incarnation-it has lost all prettiness to become totemic and almost forbidding.

Most striking of all is a series of lithographs of bulls Picasso began in December 1945 and completed a month later. The first bull stands in terrible and hulking profile like a prehistoric, carnivorous nightmare, while the last is a delicate, abstracted line drawing-more symbol than animal-a sort of hieroglyphic representation, as stylized as a Scandinavian armchair and as perfectly contained.

These wonderful series that explore variations on themes epitomize Picasso's unending experimentation. It is here that we can see him most clearly as the ebullient and endearing show-off, a sort of perpetual little boy at once thrilled and amazed by his own abilities.

Look, ma! He seems to be shouting. I can do four jack-knifes, five somersaults and twelve double back-flips! But we also see the soul of an artist who is passionately in love with his materials-in this case, the plates, the inks and the papers-and also with the wondrous, unpredictable alchemy that takes place when these materials come together.

Etching, aquatint, engraving, drypoint, linotype, he tried them all. One of his earliest prints was the moody Frugal Repast (1904), a masterful etching that depicts two doleful, emaciated figures at a spartan café table. Picasso was just 23 years old when he made this print and already a figure to be reckoned with. At 26, he bought a small printing press and cemented his life-long involvement with the medium.

Decades later, when Picasso was in his fifties, he produced a remarkable body of prints that explore love and obsession through the imagery of Greek and Roman mythology. Minotaurs and fauns lust after sleeping ladies, frolic with their own species and sometimes get their way with the humans.

In the wonderful Bacchanal with Minotaur (1933), a furry-headed beast toasts a curvaceous blond with champagne, while a satisfied sybarite lounges beside them with his own fleshy damsel. From the bull-man's muscular arms and pudgy fingers to the women's damp pubic hair, Picasso's drawing is so vivid you can almost smell the semen.

Other prints on the same theme, Wounded Minotaur (1935), Minotaur Caressing a Sleeping Girl (1933), and the famous Minotauromachy (1935) are equally tactile and provocative. Their formal beauty delights our senses but their content leaves us pondering.

What was it about these mythic creatures-with their taurine heads and human bodies-that fueled Picasso's imagination and allowed him to make some of his finest prints during the 1930s?

His youth in Spain, where the ceremony of the bullfight still keeps Spaniards bound to their Roman ancestors, explains something of the passion. But the legend of the bull-headed man held a fiercer grip on Picasso than on most Iberians.

In his prints the Minotaur is a dumb, unconscious, but strangely sympathetic character. Sometimes he wistfully watches a sleeping damsel, other times he couples with her. In still other scenes he's a wounded creature, staggering across the sands of a Roman arena, while spectators stare from the stands. For Picasso, a deep and elemental struggle between what is human and what is animal seems to be embodied in this one, humorous but also tormented figure.

Beyond the Minotaur prints and the other thematic series, there are many individually compelling works in the MoMA show, sensitively curated by Wye. Picasso's Weeping Woman (1937), made during the Spanish Civil War, while he was also working on the Guernica mural, is especially riveting for its visceral portrait of suffering.

The truth is that it's hard to go wrong when you're hanging Picassos. Of the thousands of pieces he made-beginning in childhood and continuing to the end of his life-the vast majority offer unique and surprising perspectives.

In the end, proof of his genius doesn't reside so much in any one individual work as it does in the entire body of them. It is inspiring to walk through the rooms of MoMA and watch the endless flow of Picasso's creativity as he expressed himself through the print medium. And it is equally thrilling to realize these works are just one tributary of the rushing river of one man's art.