Srebrenica's lessons for the UN 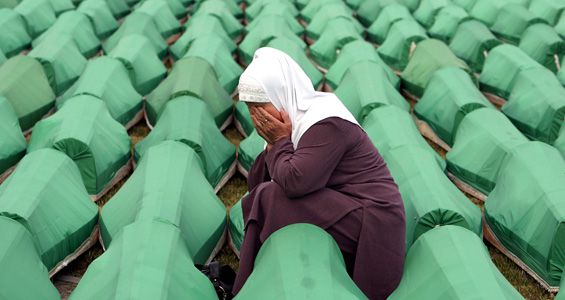 German activist Philipp Ruch's monument to Srebrenica is a huge jumble of worn shoes - 16,744 of them in memory of the 8,372 victims of the massacre that took place 15 years ago when Bosnian Serb troops advanced on a Muslim enclave that was supposedly protected by UN peacekeepers. The 'Pillar of Shame' creator says worn shoes have been pouring into Bosnian collection centres since he launched his appeal for footwear six weeks ago. They will be encased in wire mesh in eight metre tall letters spelling out UN and placed on a hill overlooking the graves of the Srebrenica victims. Here Ruch talks about his project.

You have been engaged in issues connected with Bosnia for quite some time now. How did you become interested in the country?

My best friend escaped from a besieged Sarajevo when he was 13 years old. It was only during my studies that I got to understand what happened in Bosnia.

The entire panorama of emotions poured down on Bosnia in the 1990s, from the horrific betrayal through cosmic abandonment, to episodes of radical humanity.

Why did it take Europe so long to acknowledge the genocide?

I am unsure that they did. Germany is so obsessed with itself that only a few events from the outside enter the medial sphere.

One ought to be constrained to acknowledge what Europe has done in Bosnia - done, not failed [to do].

Part of this constraint will be the Pillar of Shame.

What went through your mind when seeing pictures from Srebrenica for the first time or when speaking with the mothers of Srebrenica?

The mothers of Srebrenica carry the burden of what had been done to them with unique dignity. They are incredibly impressive, above all in their courage.

First were the images of United Nations soldiers standing by - nonconforming civil courage in cinemascope. As if someone had shown Schindler's List to them and was curious to see how soldiers would react to a bad remake.

We discovered footage for a documentary focusing on the United Nations crisis headquarters, where a soldier in Potocari yells "you have to keep the people calm!" over and over again.

This is known - mass executions, mortal fear of tens of thousands of people.

But what is most important is that no one cut off the way toward the slaughtering block. Auschwitz was built as we know it, with showers, due to this need.

But pictures disclose mistakes. For example the Scorpion video alone can hardly catch what happened in Srebrenica: unleashed dogs, the human hunt, systematic extermination, deadly marching through forests laid with mines, rapes, universal fear, and the betrayal of the international community all over it.

Why a Pillar of Shame fifteen years later?

Six-thousand survivors are suing the United Nations. But the headquarters in New York are not even considering appearing in court. This is a terrible mistake.

If it is impossible to bring the United Nations to a court, then we have to find an unconventional and maybe more effective way.

The United Nations' arrogance toward the survivors is beyond comprehension. The Pillar of Shame signifies a response to this arrogance.

This is one of the reasons why the bottom part of the Pillar bears the words "Decency made me".

We would like to put the West into possession of a knowledge that [the] Bosnian population has [had for] more than a decade: the United Nations ruined their reputation, ambition and glory.

The high esteem and great belief that the Germans ascribe to the United Nations is still striking.

What does Srebrenica mean to you?

The shoes represent the victims of the Srebrenica massacre [EPA]

I come from the generation of the "too-late-comers," as Nietzsche once formulated my problem.

Srebrenica was the collapse of our humanistic ambitions. Following Srebrenica, it is no longer feasible to claim that we as a civilisation want to prevent genocide.

The fact that Srebrenica entered the modern condition without any opposition [from] the world is incomprehensible for me personally.

In 1995, Srebrenica was for weeks transforming into a genocidal death zone with no escape out. And all this after the United Nations promised military protection, and after the disarmament of the people.

The people of Bosnia believed our promises. We broke our promises. It is difficult to dismiss the lightness with which our politicians committed betrayal in Bosnia.

Do you think we have failed to learn from history?

Our constant remembering of the Holocaust, during which the events in Bosnia, Rwanda, Darfur and Congo were enacted shows what lesson we drew from the Holocaust: never again the Jews. All other peoples are negotiable. There is no time to witness another genocide, especially because genocides have been committed too many times since 1995.

In 1999, Kofi Annan wrote: "Srebrenica is the biggest shame in the history of the United Nations". Isn't that enough?

If I was secretary general of the UN, and if the mothers of Srebrenica made the big effort to bring my organisation to court, appearing in [the] courtroom and hearing the charges would be part of [my] policy.

Looking at Srebrenica, it becomes ... clear that the UN as an international actor stands above the law. It is legally untouchable. Its representatives can do whatever they want. It is the perfect cloak.

In all respects, Annan knew what he was talking about.

In 1995, he was head of the DPKO, the "ministry of defence" of the UN. He was in charge already in 1994, when a not irrelevant genocide was carried out in Rwanda. The Blue Helmets, who are helplessly standing around on television, they were Annan's soldiers. Ascertaining shame does not suffice. It must be imparted further.