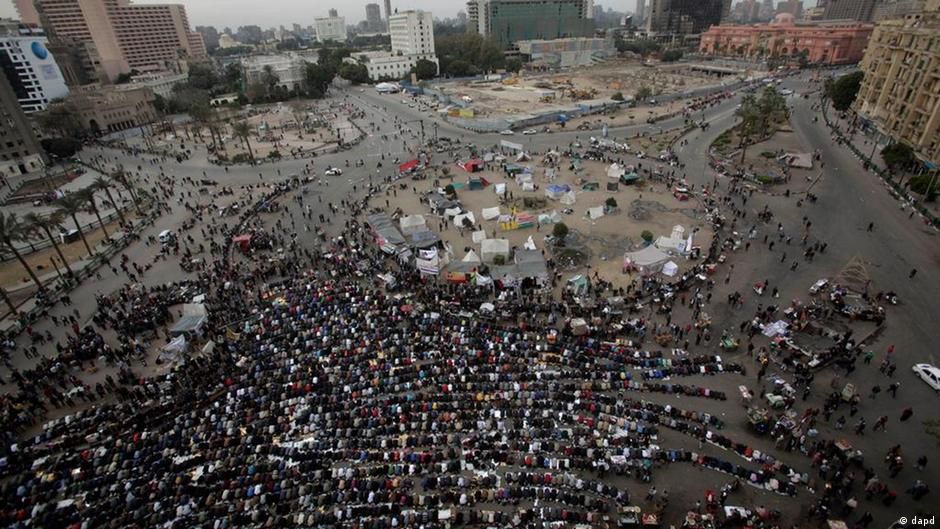 Protests in Egypt could influence other countries in the region

Public riots have resumed in Egypt, with reports of hundreds of injuries and deaths. Deutsche Welle spoke to journalist Karim El-Gawhary, who witnessed the latest protests in Cairo.

DW: Just a few days ago, 70 were killed in Port Said after a soccer match, creating new tensions in Egypt. Mr. El-Gawhary, on the night from Friday to Saturday (February 4, 2012) you were on Tahrir Square until midnight. What was your impression of the protests there?

Karim El-Gawhary: Angry young men, mostly soccer fans, had gathered around the ministry of the interior. Among them were many injured people - ambulances were driving back and forth. The current tally is 1,500 injured. In Suez and Cairo six people were killed in total: five demonstrators and one police officer, who was run over by a police car.

It is interesting how the people have organized themselves here: everyone has a gas mask at home and they all know how to behave. Tens of thousands of them stood on the square and in the surrounding streets, but they maintained an open passage to let the ambulances through. A somewhat ominous "riot routine" had been established.

In light of these events can we speak of a second Arab Spring?

The people on Tahrir Square want continuation. They see their revolution as unfinished. The armed forces have taken over Hosni Mubarak's rule and maintained stability since the first revolution. What we're now experiencing is "Revolution 2.0" - not against a dictator but against the military, which has been enmeshed in politics for over 60 years. The people know that without extra pressure nothing will be achieved, and that it is up to them. Otherwise nothing will change in the region.

In what direction are the protests developing? Are they different from the uprisings several months ago?

Protests in Egypt could influence other countries in the region

The behavior of the police seems more defensive than in winter last year. The security forces are demoralized. Meanwhile, there is increasing discussion among the demonstrators about how to proceed. Strategy debates are taking place at the back of Tahrir Square, questioning whether the large number of victims is meaningful and necessary. Some are also attempting to restrain the actions of the young men, claiming that it is important to first establish a political direction.

The Supreme Council of the Armed Forces is still the de-facto ruling body. But an elected parliament has also been in power for the last two weeks. How is the Muslim Brotherhood positioned here?

The Muslim Brotherhood, the strongest force in the parliament, is caught in between. It wants to maintain its relationship with the military council, but at the same time it senses public pressure to find solutions. This is a dangerous catch-22 situation. The Muslim Brotherhood needs to decide if it wants to continue cooperating with the military or if it wants to go along with the protesters and force the Supreme Council of the Armed Forces to stand down.

In the back of their minds is the Algerian scenario from 1992, where the Islamists achieved political victory only to be immediately removed from power by a military coup. But in the last few days the Muslim Brotherhood has made the impression that it was seeking confrontation with the military council.

How will the military council react?

Egyptian protesters are not going away

This question is hard to answer. One major focus will be keeping the military united. We are repeatedly hearing reports of rebellion within the military because some members claim that its original strategy has not been followed as it hasn't withdrawn from politics. But this development is not transparent and thus difficult to evaluate.

Can we expect further deterioration in the country's security?

The worst thing would be if this chaos escalated. What we're already seeing now is a form of organized chaos. The riots after the soccer match in Port Said were not the only thing - there have also been several armed bank robberies and the crime rate has risen to dramatic levels. Some of the young people in front of the ministry of the interior are being killed or losing their eyes due to shots fired into the crowd. This situation could worsen.

What would be the alternative scenario? The best-case scenario would be the military surrendering its rule to a civil authority. For example, it could transfer its executive powers to the president of the parliament, so that he can organize a presidential election.

In Syria, according to information from the opposition, over 200 people were killed in riots during the night from Friday to Saturday. Do you draw any parallels here? What happens in Syria has a direct effect on Egypt. I had the chance to observe how the demonstrators turned in a different direction not far from the ministry of the interior and started marching towards the Syrian embassy. The Syrian rebels have set up a tent on Tahrir Square, directly in front of the Arab League, and it seems to get a lot of visitors.

Egypt sets the standard. However good or bad the turn of events here, it can become an example for the rest of the Arab world to follow - especially Syria.