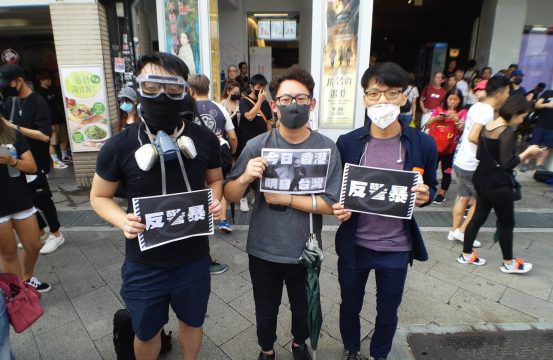 Hong Kongers in Taipei lead a call for Taiwanese to pay attention and be wary.

This past Sunday, Hong Kong protesters brought their message to the streets of Taipei as a group of demonstrators appeared in the city's popular Ximending shopping district with signs in Chinese reading: "Restore Hong Kong, Revolution in Our Time."

The demonstrators stood in the plaza outside the Ximen MRT station explaining the situation in Hong Kong, which has developed out of protest against the now-withdrawn Extradition Bill proposed between Hong Kong and China in the spring. Unrest in recent months has devolved into scenes of police brutality and white terror in the city. While another round of protests were unfolding in Hong Kong, protesters in Taipei were demonstrating to appeal to the Taiwanese, explain their demands in response to violent overreach, and express their desire to see a democratic and civil society in their home city.