Aleppo: 'At Best a Small Part of the Truth' 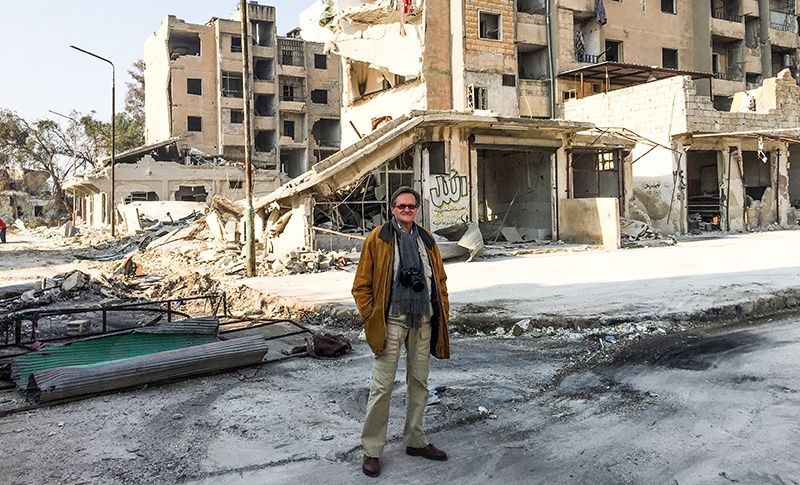 Just eight weeks ago, news about the capture of East Aleppo by the Syrian Army dominated international media headlines. Reporters speculated about ongoing massacres against the civil population, a "new Srebrenica" or even a possible genocide. Yet only a few days later, the real and supposed suffering of Aleppo's citizens vanished from TV screens.

Jan Oberg has been on the ground since when the bombs fell. And he continued reporting even when gun fire and media interest fell silent. Speaking to Fabian Köhler, the Swedish peace researcher and director of the Transnational Foundation for Peace and Future Research talks about his experiences in the war-torn metropolis, as well as his views on Western media coverage.

Almost two months ago, the Syrian Army captured the rebel-held eastern parts of Aleppo. You have been on the ground since that time. In retrospect, how do you assess the significance of those events?

I was in Aleppo from Dec. 10 to 14, 2016, when the eastern part was finally liberated. Beyond any doubt, this was a world-historic moment: because of Aleppo’s importance as a city in Syria and the Middle East, its status as a UNESCO World Heritage site, as a turning point in the soon 6-year-long war in and on Syria. And because of the almost 100,000 people who came out of 4,5 years of hellish occupation, and because of the sheer extent of the destruction.

Talking about “Hellish occupation”: Apparently you are not referring to the attacks by Russian and Syrian forces?

Whatever the large Western media have told you about genocide, mass murder, slaughter, et cetera (regarding) citizens in Eastern Aleppo, I can only report two things: None of these media were present, they reported from Beirut, Istanbul or Berlin. I did not see any of them. And I did not see any dead bodies and met no one with fear in their eyes.

What did you see instead?

I had the opportunity to visit the districts of Hanano, Ramouseh, Sheikh Saeed, the old town, the huge industrial zone Shaykh Najjar and the Jinin reception zone to which the people in need of humanitarian assistance arrived. I happened to be the only one from Scandinavia and among the first dozen people – mostly media people – to get to the east of the city and see the devastation and talk with the exhausted but immensely happy people.

What did they tell you?

I joined people in restaurants in the west who were celebrating, toasting to freedom and talking with relief about how fantastic it was to finally not have to live in fear every day. After the liberation, they were extremely happy. I listened to people expressing gratitude to both Bashar Assad and the government and to Putin and the Russians – the latter both bombing and sending field hospitals. And telling me that life was good in Aleppo before the occupiers swept through in 2012 and began the looting and the destruction.

The people did not associate these groups, bands and commandos, with or without uniforms but all with guns in their hands, with anything positive but with suffering, death and destruction – years of fear and lack of freedom.

Did you also have the chance to speak to people who had to endure bombardments by Syrian and Russian forces?

I have been to the East and saw people getting bread, vegetables, bananas and water. Sitting in chairs at the pavement and enjoying tea and a cigarette. They talked without fear. I saw people leaving in green buses from the East to the West in order to get health care or reunite with family members and friends.

People are besieged and bombarded for months. And you didn't witness a single critical stand towards the attacks by Russian and Syrian forces?

I heard people expressing their disagreement with Assad's amnesty policy. If you are a Syrian citizen and you have been out fighting against your own, you will be granted amnesty if you hand in your weapon, answer some questions and then sign a paper that you'll never do it again. That's all. You can be re-integrated into society again. Only if you have a court case against you – say, by a family a member of whom you have deliberately killed – will you be punished.

What you are telling is pretty much the opposite of the western media narrative. There were headlines about Syrian soldiers going from door to door killing civilians. Even the UN cited reports claiming forces loyal to the government massacred 82 civilians.

Media reports of rebels and their families being massacred or killed may or may not be true. I cannot judge and I cannot exclude. I did not see it and did not meet people who talked about it. Aleppo is a big city and obviously, I have not seen what happened in all its parts, lanes and houses. But I have felt – strongly – that I have witnessed something of fundamental importance that large, opinion-shaping mainstream media in the West have systematically chosen not to report.

Given what I have witnessed, news with little or no source control reporting that the Syrian government, the Syrian Arab Army and the Russians only massacred innocent civilians, that the president systematically kills his own people, are not the whole truth or worse, they are deliberately untruthful and demonizing. What you have heard about the liberation of Aleppo are either mostly falsifications or a small part of a much larger truth.

What is your truth?

The liberation of Aleppo is world history.

Most of Aleppo lies in ruins, tens of thousands of Syrians became refugees. Quite a big price for making history.

You are right. The destruction I saw in Eastern Aleppo was indescribable. It was systematic. And it was heartbreaking. I've seen the destruction of places like Sarajevo, Vukovar, Krajina, East and West Slavonia, Abkhazia and South Ossetia. This was worse.

But these ruins – including the old city that was a designated UNESCO World Heritage site – were the result of over 4 years of occupation by the rebels supported predominantly by NATO countries and other “Friends of Syria” including Saudi Arabia and the Gulf states.

I had not visited Aleppo earlier but it must have been uniquely beautiful and very dynamic in terms of culture and industry. Before the destruction was undertaken, the industrial city was looted. Everything of value was taken out of thousands of factories, shops, schools, hospitals and offices, transported on trucks to Turkey and sold there – providing these occupiers with funds to buy weapons.

Once again, international media as well as NGOs such as Airwars – a nonprofit tracking the casualties of both American and Russian air strikes in Syria – reported about dozens of attacks by the Russian Aerospace Forces and Syrian Air Force. Nevertheless, you are suggesting these attacks didn't have any impact on the destruction of Aleppo?

The truth is complex and of course, neither the Syrian military nor the Russians are innocent of this destruction. But my impression was, that a maximum of ten percent of the immense destruction has been carried out from the air. When you bomb from the air, houses will be flattened. But as you can see from my pictures walls are covered with bullet holes but often they are still standing. That is characteristic for house-to-house fighting. That being said, one thing must be crystal clear: no citizens deserve to have their city, their homes and workplaces, their culture and history destroyed in this manner. No political goal whatsoever could legitimate this barbarity.

Local activists and first responders such as the White Helmets constantly reported about the huge destruction caused by air strikes, bombings of residential buildings and hospitals, etc. Did you have the chance to speak to one of them?

No. I did not meet anyone from this alleged humanitarian organization that has been funded with US$100 million. I met a few locals who had heard about them, but none who had seen them or been assisted by them during these years of occupation. Where should they have been if not in Eastern Aleppo helping tens of thousands after the liberation from four years of hell? Instead, I met Syrian youth volunteers, mostly from Aleppo's university and from the Syrian Arab Red Crescent, an organization which has not been so fortunate in receiving western funding.

Your photographs show Syrian soldiers providing food, Russians doctors running field hospitals. These are similar to what official Syrian news agencies such as SANA publish. Is free and independent reporting even possible in an area crowded by the military? How can you be sure they did not just let you see what they wanted you to see?

First of all, I would also have photographed European or American aides, but I couldn't find any. Those who helped these innocent, destitute East Aleppians were the Syrian government and its Syrian Arab Army, the Syrian Red Crescent, Russia with field hospitals and doctors and Syrian youth volunteers, mostly from Aleppo's university.

Concerning how freely I could report: I was not embedded with the military at any point but did travel with military protection in a couple of cases before and after the liberation when bombs still fell and the risk of sniper targeting was considerable. Still, I could freely talk with any citizen in the streets of East Aleppo, no one guiding me to any persons at any point. I was free everywhere to select the scenes and people I spoke to and photographed.

You published photo stories about the people of Aleppo on your website, the last one as recent as this week. I tried to find similar projects in mainstream media but couldn't find a single one. Do you share the impression, that most media have already forgotten about Aleppo?

Yes, the media has been quick to forget Aleppo. As usual, when the violence dies down, media lose interest and travel to another bloody drama – thus depriving themselves of good human stories and the chance to learn where and how they were mistaken.

For weeks, many of them reported that more and more of East Aleppo was "falling," i.e. getting back under government control. In spite of that, they chose to not be present at the liberation – such as BBC – although they must have had a visa since they had been there earlier. One can only wonder, why were there no Western media present in Aleppo on Dec. 11, the day when this historic event took place?

Instead few independent observers like you covered the events. Although you are not even a war correspondent but a peace researcher. Isn't there a risk of obstructing your research by getting too close to human stories?
I am convinced the world has too much – far too much – war reporting and “blame-journalism” and far too little conflict reporting and human interest journalism. Journalists are obsessed with governments and violence and ignore the perspectives of the citizens, the victims and those who can make a change for the better.

Jan Oberg is a peace researcher, international mediator, art photographer and director of the Transnational Foundation in Sweden.