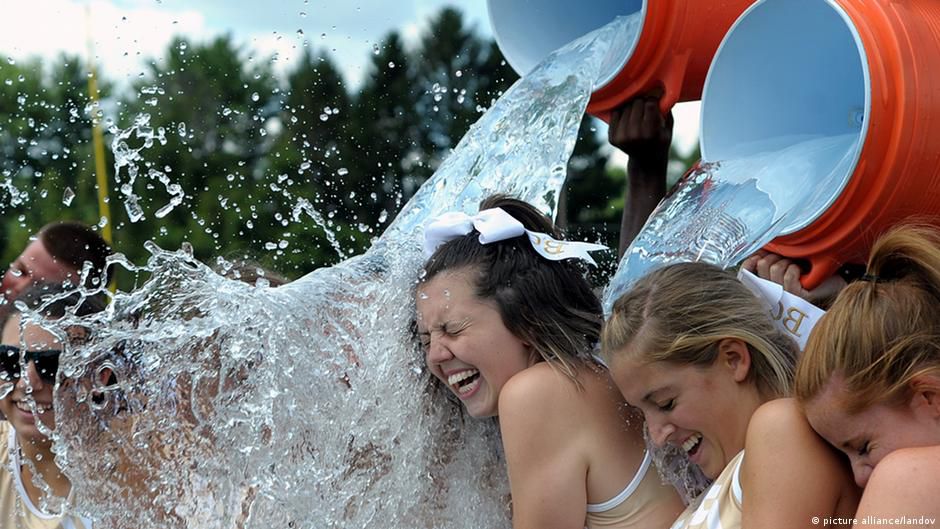 The Ice Bucket Challenge was started as part of an effort to raise awareness of amyotrophic lateral sclerosis (ALS) and encourage donations for research towards a cure. The campaign, which involves dumping ice water on someone's head, has gone viral since it started in July.

The challenge has raised more that $100 million for ALS, but critics feel that the global phenomenon poses some problems. Some are worried about wasting water and others feel that its popularity is detracting from the initial cause. As a result, some people have come up with other trends, in part to support other issues.

Play a role in stopping hunger

In the Rice Bucket Challenge. Indian Journalist Manju Kalanidhi asks people to take a photo or video of themselves giving rice to someone. Some Indians have already taken part.

It's not just ice water. You can also use toilet water for the ice bucket challenge like Matt Damon to raise awareness of more than 800 million people who have no access to clean drinking water around the world. But not everyone may be keen on this version of the challenge.

If you are not game for the toilet water challenge, you can drink beer or eat a taco to support women's reproductive rights. The challenge was started by Andrea Grimes.

While eating a taco or drinking a beer, you can also give money to an abortion fund because the procedure can be very expensive.

Use bullets to promote civil rights

Several celebrities have been asked to do the Ice Bucket Challenge. Actor Orlando Jones used his to draw attention to civil rights following the police shooting of an unarmed teenager in Ferguson, Missouri, by pouring a bucket full of bullets on himself.

Now, if you thought pouring ice water over your head is a challenge, imagine sand or debris. Student Maysam Yusef called on people do just that to draw attention to the conflict in Gaza. More than 1,950 Palestinians were killed in the most recent conflict in Gaza, and Yusef wanted to raise awareness on the terrible living conditions there.

Trash is also a major problem in some cities, so Kahi Pacarro of Sustainable Coastlines in Hawaii has started a campaign to get people to clean up. All you have to do is collect trash in a bucket and then dispose of it properly.

Edith Brou wanted to relate the charitable challenge to her country on the Ivory Coast by asking people not only to pour soapy water onto themselves, but also to give out hand a sanitizer to help fight against the spread of ebola in West Africa.

Unlike Matt Damon, Californians are pouring sand to save water and draw attention to the drought in their state. The same challenge is also being used by the "The Save the Sea Turtle Foundation" to raise awareness about the animal.