Inside the World's 'Only Official Prison Tattoo Parlour' 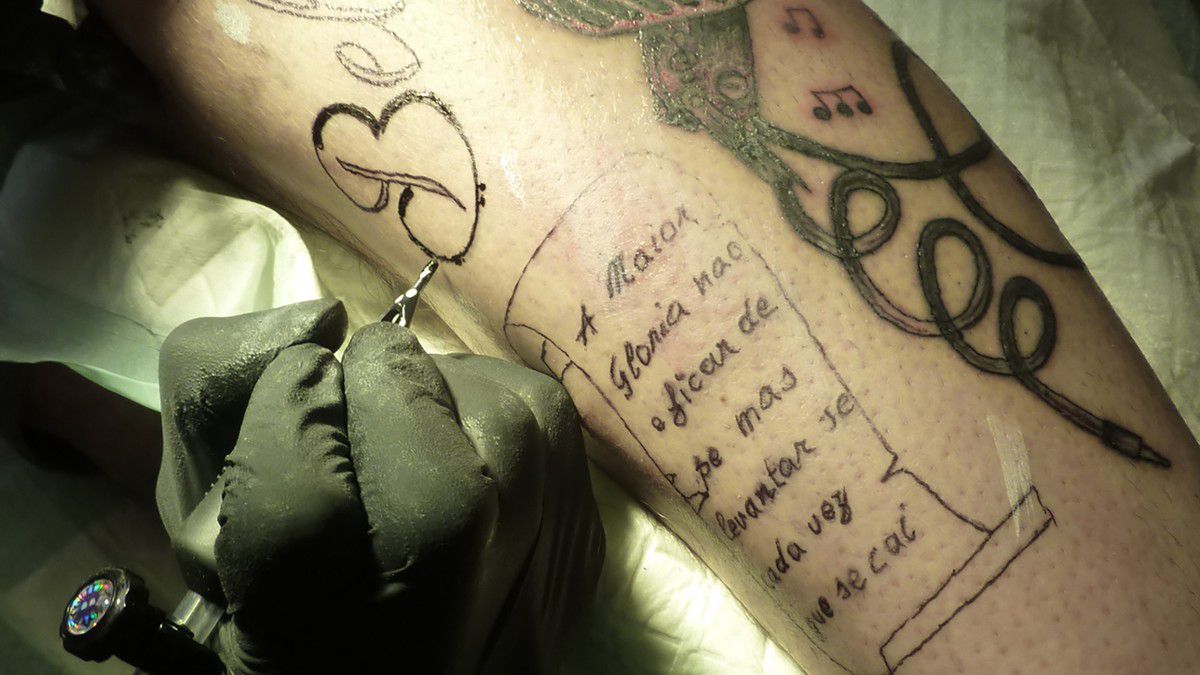 This story is about a tattoo studio behind bars as a harm reduction approach.

In the good old days, if you were in jail and wanted to get a tattoo, you'd take the tiny motor out of an electric shaver or CD player, attach it to a ballpoint pen, insert a sewing needle into that contraption and jab it repeatedly into your skin. Painful, often unsanitary and, until recently, exactly what inmates would do inside Schrassig, Luxembourg's only prison.

"Prisoners actually used everything they could," says Mike Conrath, 45, who works in the jail's medical clinic. Besides the shoddy machines, Conrath says they had some "really bad ideas" when it came to how to make the ink: "They would melt the cover of their shower gel bottle and let the steam evaporate, leaving the colour behind; or they'd mix cigarette ash with spit and water."

A 2010 analysis of 124 studies from 30 countries linked prison tattooing with a high risk of contracting HIV, hepatitis and tuberculosis. Four years ago, an old colleague of Conrath's interviewed inmates for her thesis and found that 100 people were tattooed in Schrassig during their sentences.

Worried about the extent of the problem, Conrath and his colleagues came up with the idea for the Inmates Tattoo studio. It only took half an hour to convince prison management of the idea, since the total cost of the project - about €50,000 (£41,000) - is the same as treating one prisoner for Hepatitis C.

Clueless about where to begin, Conrath looked up local tattoo artists online and found someone who was was enthusiastic about the project. "He came to the prison and taught us everything," says Conrath, adding that he helped to order needles, machines, inks and templates from France.

The studio doesn't train tattooers. "We simply offer sterile material and a clean environment," explains Conrath. Tattooing is going to happen regardless - allowing it to happen in a safer environment simply minimises the damage: "If we distribute syringes and condoms, we should also issue tattoo needles."

In February of 2017, the first inmates began basic training, learning which kinds of diseases were transmittable and how to keep the workplace sterile. Since prison inmates get sick more often than the average person, Conrath tries to keep the risks down by wrapping equipment in plastic and double cleaning all tools. "Even if only one person gets infected, I'll look very stupid," he tells me. According to Conrath, Inmates Tattoo is currently the only official prison tattoo parlour in the world. Two similar projects were started in Canada and in Barcelona, but neither was successful.

According to Conrath, between 17 to 19 percent of prisoners have hepatitis, with type C being the most transmitted infectious disease behind bars. However, Schrassig only tests prisoners at the beginning of their sentences, so they don't know how many Hep C while in custody, nor if they've been able to reduce the rate. Conrath says he just wants to prevent infections wherever possible.

When the parlour finally opened in April of 2017, it was inundated with requests. By the end of 2018, 140 inmates had been tattooed. Conrath says prisoners often get the names of their children or partners on their skin, although some come in with much darker requests, like covering up the name of the spouse they're in jail for murdering. All body parts and tattoos are allowed, including the most infamous of prison tattoos: the teardrop under the eye. Only xenophobic tattoos, such as swastikas, are off-limits.

The studio counts 19 inmate tattoo artists, all with very different skillsets. Some are almost as good as professionals, others "are not very good, but the inmates are satisfied", says Conrath. Usually, they get paid in rolling tobacco packs, and sometimes with pasta. Some inmates drop in just before their release to save money on their design of choice - but Conrath advises these customers to wait and see a professional.