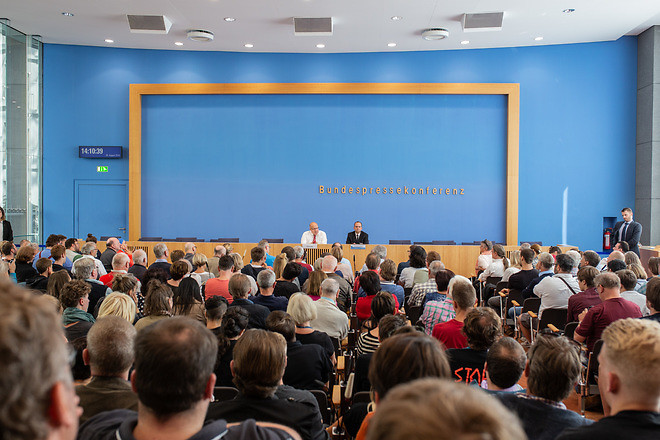 It's a familiar scene: roughly a hundred journalists cram into the James S. Brady Press Briefing Room at the White House, only 49 of them privileged enough to have a seat, competing like school kids for the attention of the president or, more often, his press secretary, wrangling with White House aides over the microphone and granted speaking privileges at the whim of whoever is at the podium. When he watches the White House briefings, Gregor Mayntz is happy to be a German. "Whenever I see this, I think how lucky we are to have the Bundespressekonferenz."

Mayntz is a Berlin-based political reporter for the German daily Rheinische Post. In his second, unpaid job, he is the president of the Bundespressekonferenz (Federal Press Conference, or BPK), a German institution that has no counterpart anywhere in the world. "Since 1949, the federal government is our guest three times a week, we determine the rules, we pick who can ask a question, no matter how critical it is, whether they come from a small or a big media outlet." Everybody gets a seat in the spacious 200-seat auditorium. And the government can't revoke journalists' credentials, like the White House tried to do with CNN's Jim Acosta.

Journalists as the hosts, not the guests, of press briefings is a long-held tradition in Germany. It was exactly a hundred years ago, after Germany lost World War I, that the Berlin correspondents of the major newspapers decided they didn't want to keep depending on misleading government communiqués that the emperor had provided during the war. Those were revolutionary times, and this revolution was one of the few that stuck. Until 1933, when Hitler's minister of propaganda, Joseph Goebbels, liquidated the so-called Reichspressekonferenz.

But after World War II, on the day that West Germany's parliament elected the first chancellor, Konrad Adenauer, a group of journalists got together and founded a new organization, the BPK. Adenauer was their first guest, and today no leading politician can afford not to expose themselves to the unfiltered and sometimes irreverent questioning of the press corps at least a couple of times a year. "The public image of a politician depends at least in part on whether they are prepared to confront our questions," says Gregor Mayntz.

The BPK is a membership organization. In order to join you have to prove that you make a living reporting on Berlin politics. A professional blogger can be a member, an industry lobbyist can't. Freelancers pay a membership fee of €24 ($27) per month, staff writers €36 ($41), and those fees make up the entirety of the BPK budget. In addition to the over 900 members, around 400 foreign journalists have access to the press conferences through their own organization.

Every Monday, Wednesday, and Friday at 11:30am, the press secretaries of Chancellor Angela Merkel and her ministers sit on the podium at the BPK, which every German knows from television news. When there are important matters to be announced, the ministers themselves usually join the meeting, which is hosted by a BPK board member. The politicians give a brief statement about current government policies, then the floor opens to the reporters who are not limited in the scope of their questions. On slow days, the whole affair is over in 20 minutes, but in turbulent times, the meeting can last longer. The rule of thumb is to finish within an hour, but ultimately the host decides when it's over.

And the politicians better be patient. Mayntz remembers a single case when a minister left the room early after some probing questions into a personal scandal: "He wasn't the minister of transportation for a long time afterwards." And one day in 2011, the journalists walked out. The minister of defense, Karl-Theodor zu Guttenberg, who was accused of plagiarism in his PhD thesis, sent his press secretary instead of appearing in person.

Of course the BPK is not the only way that politicians address the media in Berlin. Merkel only shows up a couple of times per year-she prefers to hold traditional press conferences on her home turf, in the executive office of the chancellor. Merkel is known for her desire to keep things under tight control. As the host she can pick whom she invites and whom she calls for questions, just like her colleagues all over the world.

But the BPK is the place where most of her administration's new initiatives and bills are presented to the public. And it's not only the three government press conferences per week: the BPK board invites guests, like industry leaders or heads of political parties, that they deem interesting to around a hundred special conferences a year.

In principle, the open character of the meetings, where questions are asked in the order that journalists raise their hands, no matter how fringe their publication might be, makes the BPK vulnerable to abuse by journalists. In practice, the whole thing works amazingly well. Seasoned members of the press corps raised their eyebrows when a video blogger named Tilo Jung started filming the conferences for his YouTube channel in 2014, testing his colleagues' patience with a lot of unusual, sometimes bizarre questions, but now he is seen as a part of the routine. Gregor Mayntz's only worry at the moment are some of the Russian journalists in the international press pool. "They are asking questions that sound journalistic, but they are financed by Putin and have a propaganda background," he says. "We're keeping an eye on them."

The BPK is a well-oiled journalistic machine that has been working for 69 years without major hiccups and without a lot of public attention. Even in Germany, few members of the public realize how unusual and unique this institution is. Most readers and viewers probably think that the press conferences in front of the familiar blue wall with the golden letters are hosted by the government. Only once a year the BPK makes big headlines itself, when it hosts the Bundespresseball (Federal Press Ball), one of the major social events in the German capital.

Still, many in the German press corps cannot help but watch with bemusement as Sarah Huckabee Sanders continues to wield all the power in the White House Press Briefing in the US. Back in 1949, the founding of the BPK allowed German journalists to take control of the conversation. Those were times of political turmoil, weak government, and a wide-spread desire for change, and long before professional spin doctors came along and shaped the discourse.

Christoph Droesser was an editor and reporter for Germany's major weekly paper Die Zeit for many years. He moved to San Francisco in 2014 and works as a freelancer for print, radio, tv and online media.