Paralympics 2012 opening ceremony: 'I was so happy to go back to the stadium' 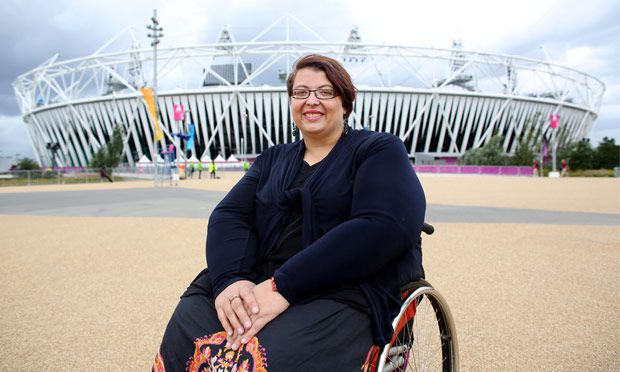 I'm one of just a few people who appeared in both the Paralympic and the Olympic opening ceremonies. To begin with, it wasn't clear that I'd be allowed to perform in both so when they told me I could be in the Paralympics as well, I was so happy to know that I could go back to the stadium and inhale the atmosphere again.

I'm so proud that I've been involved. The experience of performing there was one of the best things I've done in my life.

If anything, the secrecy surrounding the Paralympics opening ceremony has been even greater than the "save the surprise" campaign for the Olympics performance. We were not allowed to watch any of the other performers rehearsing, so I didn't have a clear idea beforehand of what it would be like.

But the atmosphere behind the stage has been the same. You must be very committed and focused, and willing to wait for hours and hours before you get on stage. You have to keep in a good mood and have fun with the people around you, otherwise it just doesn't work.

It looks so nice on television in the end, but no one realises how much hard work goes into it. I did around six rehearsals with my choir, the Lewisham Choral Society, for the Paralympics performance, five of them at the stadium, and another 150 hours of rehearsals for the Olympics ceremony, where I was dressed up as one of the NHS nurses (not all of them actually worked for the NHS).

We were rehearsing in the worst conditions you could think of - mainly because it was raining so much of the time - but I've made so many friends.

At the Paralympics we sang a new piece of classical music - Principia, composed for the ceremony - and the national anthem. We were actually singing in the stadium, but only the people standing next to us could hear us: everyone else heard a recording we did earlier ...

The best part for me was the big finale with all the other performers, because there was some movement. It was a celebration of diversity, which I liked. I was wearing a very weird costume - blue trousers, blue shirt, blue Doc Martens, and huge rainbow-coloured plastic circles on the shoulders. It's quite strange but they've promised us it will look very nice from the top. I preferred the NHS costume: a 1940s nurse's outfit, with an apron, hat and collar, all made to measure. I'll keep that forever.

Six years ago I moved to London from Hamburg in Germany, intending to be here for six months to work for the BBC, but I decided to set up my own newspaper and stay. People are much more relaxed about disability here, and that was a big part of my decision to stay. It's not a big issue if you're a wheelchair user. I don't get stared at as much as in Germany, for example.

But performing in these two opening ceremonies has been a particularly inclusive experience. I have a spinal cord injury which I got shortly after birth when a doctor gave me an injection in the wrong way, and it means I can't walk at all. I went to a mainstream school and I'd always enjoyed dance classes, but I'm by no means a professional dancer. I just imagined I could do it, and the casting team thought the same way too when I went to the auditions.

When they called me and told me I was going to be in the NHS part of the ceremony, I was a bit worried that they were going to make me play a patient, because that's normally what happens. People say: "Oh, you're a wheelchair user, so you can play the part of someone who's sick." To use a wheelchair user to play a nurse was such an unusual role-change. I loved it!

In the end, I had a very, very active role in the Olympics ceremony because I was an NHS nurse dancing around a trampoline in front of the royal box. I think it helped change the way disabled people are seen. It sent out the message that disabled people can be everywhere doing nearly every job. I appreciated that; it's not always the case that things are so inclusive.

But I am a bit surprised that there were not more disabled people in the Paralympics opening ceremony. I think there were reports saying there were only 100 out of the total of 3,000 volunteers. I don't know why that is.

Generally I think attitudes towards disability are improving here. I hope the Paralympics will help that. But some things remain difficult: on my way to the rehearsals if I was travelling by public transport I always had to leave a lot of spare time, because you can never be sure that things will be working smoothly, or that there will be room for you on the bus.

I'm a bit disappointed that there are still only 65 out of 270 tube stations step-free from street to train. I hoped that there would be more by the beginning of the Games: a couple of years ago, Transport for London promised more. I hope they keep the mobile boarding ramps that they've installed in the tube for the Games; it would be a definite legacy if they could stay. If they are still there when the Games are over, and at more stations, that would be good.