Say No to Super Trawlers 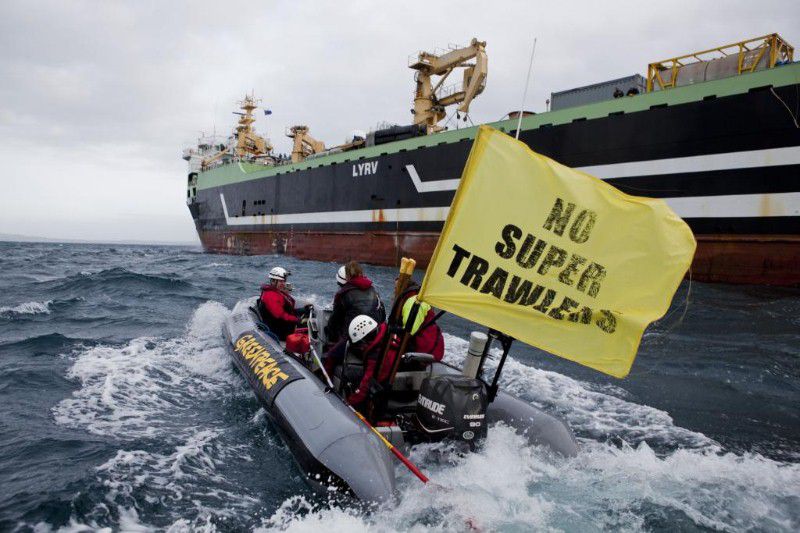 Fish is caught on Supertrawlers today. In Europe, In Australia, Australasia and everywhere. They have nets the size of 13 747 Jumbo Jets. Can you imagine what that means? Some believed the "super-trawler" would revolutionise the fishing industry . But Anti Campaigns by shocked Animal Rights Activists are finally having an effect and stop tgose boats from going out again.

Supertrawlers often use advanced technology like enhanced sonar and even airplanes and helicopters to locate a bait ball. This bait ball is food for an entire ecosystem of fish and oceanic life. Means, with one "net" they almost fish out all the fish that is on that piece of ocean! Their bycatch is not only bait - they catch Dolphins, Seals, Hammer sharks, Sea Turtles, Whales and other oceanic animals.

Look at this little "on board video" to see, what fishing nowadays really means:

Inspired by the touching stories of small low impact fishers around the globe being impacted by real "monster boats", Greenpeace Author Angela Lazou Dean recently decided to look into the definition of environmental justice.

There is a general acceptance that it revolves around local, low income communities being disproportionally subjected to higher levels of environmental risks.

These lines have definitely rung a bell as they so accurately describe what is wrong in not just European fisheries. She examines some examples: Is it just that one single monster, the Dutch Ship Cornelis Vrolijk, holds 23% of the English quota and about 6% of the entire fishing quota for the UK, while 5.000 traditional UK fishing families with small boats are marginalized holding just the 4% of the whole UK quota between them? Is it just that five vessels hold 20% of the UK quota? Is it fair that low impact fishers, making up approximately 80% of the fleet, get only 4% of the "pie"?

Angela Lazou Dean realizes that overfishing in Europe is first and foremost a matter of injustice, and not just an environmental one. For too long the European fisheries legislation and political system has favored the large scale industrial vessels, giving them more quotas, increasing their catching capacity and subsidizing with public money the depletion of common fish resources. All these to the expense of small fishers and their communities, who have been struggling for years to get their voices heard by politicians, even though they represent 80% of the fishing fleet.

She also realizes that L.I.F.E, the new organization of Low Impact Fishers in Europe, has an historical role to restore justice in fisheries as it carries a heavy responsibility, not only of fighting to achieve sustainable fisheries, but also of reestablishing what is morally correct.

Now more than ever, there is an opportunity to achieve this. The new Common Fisheries Policy (CFP), for the first time, offers the chance to put an end to overfishing by reducing fleet capacity starting with eliminating the most destructive vessels, and promote access to resources for those engaged in sustainable fishing. Now more than ever, European fisheries ministers must apply these rules.

In Australia, a two-year super trawler ban ended in November 2014 and the ships are not allowed to go out anymore!

See this interesting ABC Reportage about how complex this issue was in many ways here.

But there is an international fleet of freezer-factory trawlers on the doorstep and the industry is still trying to bring them into the waters.

Stand up and raise your voice with greenpeace here!Also: Sign the petition to convince Prime Minister Tony Abbott in Australia to permanently protect our marine life, fisheries and the future of our fishing, from all super trawlers
Zum Original
Original anzeigen Erstellt am 07.11.2018
Bearbeitet am 07.11.2018
Quelle
http://oceanamp.org/say-no-to-super...
Lizenz