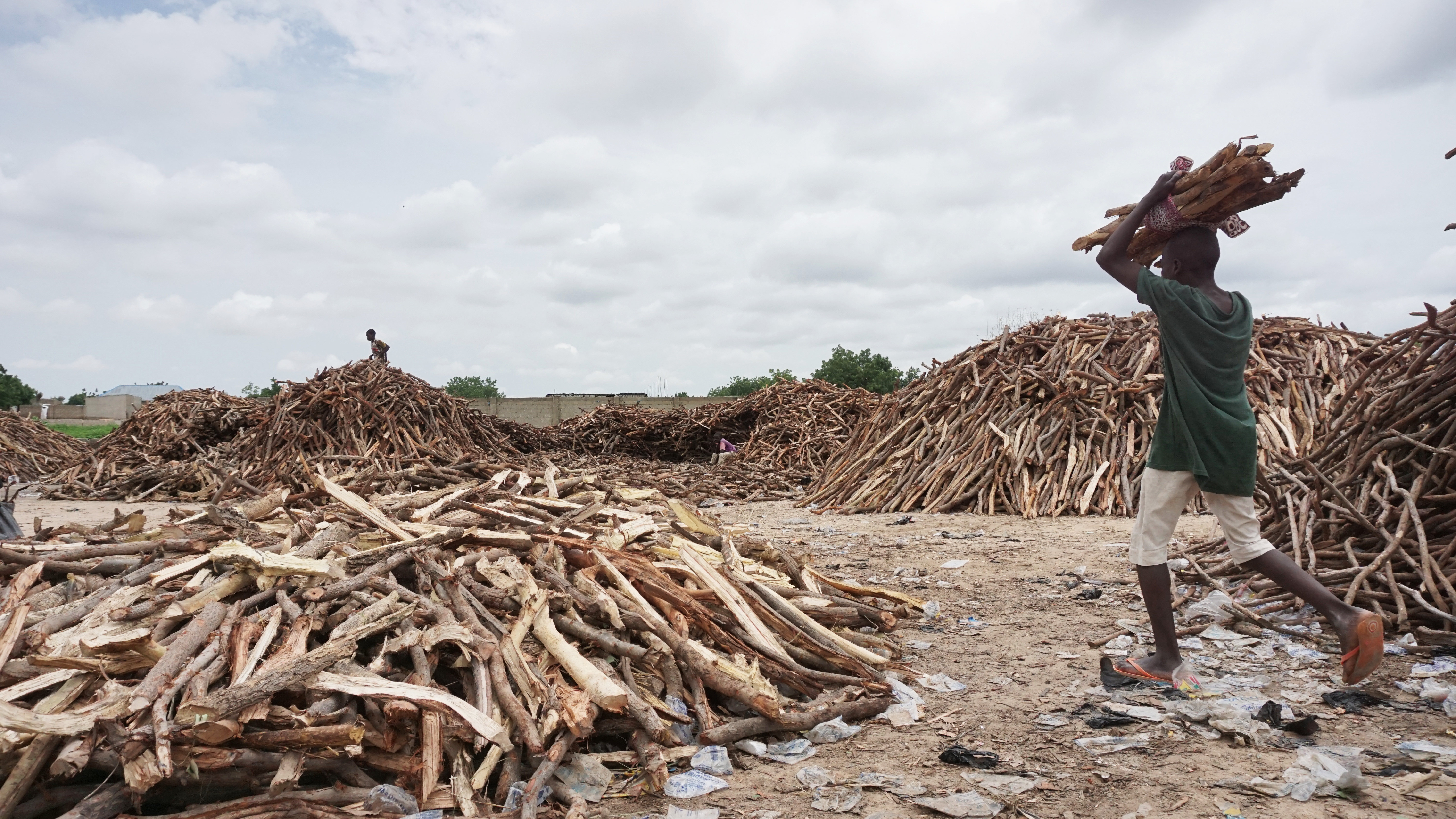 For all his adult life, Mohammed Haruna has worked as an accountant at a local bank. But with the escalation of the Boko Haram conflict in Nigeria's Northeast, investors shied away. Five years ago, Haruna lost his job. To sustain his four kids and wife, the 49-year-old has desperately been looking for a way to make money.

He points at the big pile of wood behind him-it's what he is offering clients today. As soon as everything is sold, he will go back into the bush to cut further trees.

The demand is high because firewood has become the number one source of energy in Nigeria's conflict-ridden Northeast.

One loaded pick-up truck after another is leaving the market on the way to the customers' homes. Five years ago, one load cost around 12,000 naira, today the price has more than doubled to roughly 25,000 naira ($70). And with every year that the conflict with Boko Haram persists, both demand and price are rising-and simultaneously the number of people looking for an income in the wood business.

It is people who have lost their jobs due to the troubled economy, as well as expelled farmers and fishers, who were forced to move into the city because of the conflict and were deprived of their livelihood. Around 2,000 are registered with the official Association of Firewood Sellers in Maiduguri, a city of one million people. But additionally, many cut down trees illegally and violated Nigeria's rarely observed environmental laws.

Sustainability has no place in the midst of conflict.

"This is a fight that will keep us busy much longer than the one against Boko Haram."

As firewood seller's association, they try to work for the conservation of the bushland by telling their members to only cut down dead trees and participate in tree planting exercises across Borno state. Logistics for these exercises are mostly organized by the government, while the association is providing the labor force. By doing so, they try to make up for the trees that were cut down. "But we have problems with the many woodcutters, who are not part of our association because we have no control about what they do," he says. Also environmental activists are concerned and push for stricter regulations. "The Sahara is directly in front of our doors. If we are not careful, all this will soon turn into a desert", says Cheri Lawan, a doctoral candidate on sustainability management at the University of Maiduguri.

"Of course, climate change is a global problem that we cannot fix by stopping to cut down our trees", he says. "But we have to start somewhere and protect the few resources that we still have."

Lawan is convinced the changing climate is the main trigger of the conflicts in the region. Nearly 80% of people here earn their livelihood from agriculture. But the increasingly irregular rainfall has been leading to harvest shortfalls. And Lawan says when people have nothing to eat they will be ready to take up a gun to survive. In addition, the level of education in the region is low and poverty is spreading. As has been noted many times before over the last decade, these factors make this region of Nigeria fertile ground for terrorist groups.

Islamic terrorist group Boko Haram, which roughly translates as "Western education is forbidden", has been committing attacks on locals and institutions in northeastern Nigeria since 2009. Over 37.500 people have died in the conflict with the group according to data collected by the Council of Foreign Relations. Millions have had to flee the wider area with many living in IDP (Internally displaced person) camps miles away from home.

The Lake Chad Basin, at the borders between Nigeria, Chad, Cameroon, Niger and the Central African Republic, is an important strategic location as the last green oasis before the Sahara Desert. While the jihadist rebels had initially had blocking Western education at the forefront of their terrorism, today it is mainly about supremacy around Lake Chad, says Kwaku Arhin-Sam, researcher for West Africa Migration Governance at Arnold-Bergstraesser Institute in Germany: "It all seems to develop into the direction of a caliphate in the region. But no one really knows, what they are planning."

But there are indications the self-confidence of the jihadists is increasing.

Shortly before mid-August, an armed group blocked the highway that links Maiduguri with the Nigerian capital Abuja-in broad daylight. No one here believes the conflict will end anytime soon.

Quite the contrary: More and more people have to flee from their hometowns. In total, Nigeria already counts around 2 million internally displaced persons. They look for shelter in towns such as Monguno-hosting already around 130,000 refugees, and every month brings new arrivals.

One of them is Hauwa Mohammed, a 70-year-old fisherwoman, who had to flee from the port town of Baga. She is sitting in front of a hut in the reception center in Monguno, where recently arrived people are assigned to different parts of the camp. "Two of my sons have been caught by Boko Haram. I heard, one of them is even fighting for them now", she says. "It's the biggest torture to think that they are in the hands of these terrorists."

Hauwa Mohammed grew up next to Lake Chad. For decades, her family has been following the same routines: During the day, the men would sail out on the water in their long narrow boats and returned around one o'clock at night with the fresh catch. Then, the women prepared the meal for the morning. "But the men brought less and less fish home. Soon, we were sitting in front of empty plates."

Prior to the conflict, the family would probably simply have moved. But the presence of Boko Haram has made this close to impossible, as big parts of the state of Borno are too dangerous. Thereby, the population's ability to react to the changing environment has eroded. Instead, 10.7 million people in the region became dependent on the food supply of international aid organizations.

"Climate change is a multiplicator of the many threats," says Chitra Nagarajan, lead author of a study by the research institute adelphi. For six years, Nagarajan researched the implications of climate change and conflict in the Lake Chad Basin.

Between 1970 and 1990, 90% of the lake disappeared, a tragic memory for many. While Lake Chad hasn't been shrinking anymore in recent years- it has even regained slightly in size -the consequences of climate change are devastating: During the rainy season, there are more and more floods, during the dry seasons, severe droughts have become more frequent. Farmers fight against harvest shortages, herders have to go further in the search of pastures for their animals.

Mohammed Haruna, the firewood seller, testifies about the changes in the region. He is from the Kare-Kare tribe, traditionally engaged in agriculture, especially the cultivation of millet, maize, and groundnuts, as well as stockbreeding. However, the yields are reducing from year to year. "Many of us have moved to other regions that are more fertile," Haruna says.

That means moving southwards, into the so-called middle belt of Nigeria. However, the locals here are not exactly excited about the arrival of their compatriots from the North. The competition for scarce resources is already escalating. Between 2016 and 2018 alone, over 3,600 people have died - over half of them in the past year alone. This means, in 2018, conflicts over land use have caused around six times more deaths than the terror of Boko Haram.

Solutions against the long-term effects of the climate crisis and the conflict have to be addressed urgently, says Haruna. Against the rising level of poverty, against the deforestation of the bushland and against the spread of the Sahara. "Even if the conflict is going to end at some point, the consequences of climate change destroy our livelihood."

A peaceful future for his four kids here in the state of Borno? It is hard for the former banker to believe that. Governments around the world would have to adopt much stricter climate policies, he adds.

But also here in Maiduguri the topic needs to receive more attention - not least amongst the firewood sellers, Haruna says.

"This is a fight that will keep us busy much longer than the one against Boko Haram," Haruna says. Terrorism, that's an acute crisis. The decisive question is if the Lake Chad region will be able to offer a source of livelihood in the future.

If it doesn't, the security situation is likely to only get worse caution political analysts and environmentalists alike. It's a perspective which urges governments to take much bigger steps, as the climate crisis has become a strong catalyst of conflicts in Lake Chad, as well as in many other regions of this world.